Book:  Solzhenitsyn – The Gulag Archipelago – with foreword by Jordan Peterson  9/10 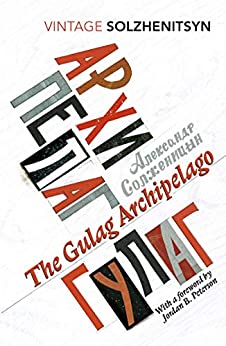 This is an incredibly important book.  If we lived in a sane world every school pupil and/or University student should read it.  Stunning – in so many ways.  And a great warning.  The foreword from Jordan Peterson is an added bonus of this edition.  I have 93 highlights in my Kindle edition – here are a few…

The simple act of an ordinary brave man is not to participate in lies, not to support false actions! His rule: Let that come into the world, let it even reign supreme—only not through me. But it is within the power of writers and artists to do much more: to defeat the lie! For in the struggle with lies art has always triumphed and shall always triumph! Visibly, irrefutably for all! Lies can prevail against much in this world, but never against art.… One word of truth shall outweigh the whole world. –From the speech delivered by Aleksandr Solzhenitsyn to the Swedish Academy on the occasion of his acceptance of the Nobel Prize for Literature

A submissive sheep is a find for a wolf.

A person convinced that he possessed spiritual truth was required to conceal it from his own children! In the twenties the religious education of children was classified as a political crime under Article 58-10 of the Code—in other words, counterrevolutionary propaganda! True, one was still permitted to renounce one’s religion at one’s trial: it didn’t often happen but it nonetheless did happen that the father would renounce his religion and remain at home to raise the children while the mother went to the Solovetsky Islands. (Throughout all those years women manifested great firmness in their faith.) All persons convicted of religious activity received tenners, the longest term then given.

If only it were all so simple! If only there were evil people somewhere insidiously committing evil deeds, and it were necessary only to separate them from the rest of us and destroy them. But the line dividing good and evil cuts through the heart of every human being. And who is willing to destroy a piece of his own heart?

How could it be anything but hard! It was more than the human heart could bear: to fall beneath the beloved axe—then to have to justify its wisdom. But that is the price a man pays for entrusting his God-given soul to human dogma.

Lev Tolstoy was right when he dreamed of being put in prison. At a certain moment that giant began to dry up. He actually needed prison as a drought needs a shower of rain! All the writers who wrote about prison but who did not themselves serve time there considered it their duty to express sympathy for prisoners and to curse prison. I… have served enough time there. I nourished my soul there, and I say without hesitation: “Bless you, prison, for having been in my life!”

And how can one explain that certain unstable people found faith right there in camp, that they were strengthened by it, and that they survived uncorrupted?

All you freedom-loving “left-wing” thinkers in the West! You left laborites! You progressive American, German, and French students! As far as you are concerned, none of this amounts to much. As far as you are concerned, this whole book of mine is a waste of effort. You may suddenly understand it all someday—but only when you yourselves hear “hands behind your backs there!” and step ashore on our Archipelago.

As WWII looms, a wealthy widow (Carey Mulligan) hires an amateur archaeologist (Ralph Fiennes) to excavate the burial mounds on her estate. When they make a historic discovery, the echoes of Britain’s past resonate in the face of its uncertain future‎.   This is an unusual, somewhat quirky and fine film.  Ralph Fiennes is a great actor.  Lots of themes to get you thinking – including life, death, meaning, war, history and archaeology.

As one wag put it. “Oh a film about an archaeologist that doesn’t involve rising mummies, lost arks, and dinosaur cloning… I dig it!”

Holy Smoke is almost always a good listen.  It’s the Spectators religious podcast with Damien Thompson.   Although it would be more accurate to say its the Catholic podcast with a little of other religions, including High Church Anglicanism, thrown it.   I find it quite fascinating and informative.  None more so than this episode on Integralism in the US Catholic church.  Integralism is the Catholic version of full blown theonomy.   Extraordinary.  Here is the blurb…

“This week’s Holy Smoke examines the fragmentation of American Catholicism following the election of pro-choice Catholic Joe Biden. It focuses on the strangest current of thought among the many conservative Catholics calling for an urgent change of approach in order to confront what promises to be an authoritarian liberal administration.It’s called integralism, a label previously attached to distinctly un-American European Catholic reactionaries such as Action française and General Franco’s Falangists. In its US incarnation it’s less nationalist but in some ways equally extreme. Its proponents want to turn the United States into a nation in which, in the long run, only Catholics will be full citizens eligible to hold office.”

Triggernometry is a show I occasionally listen to.  Often the guests and subjects are fascinating and the two presenters do a great job.  This episode with Posie Parker is revealing.  Be advised that the language (especially at the beginning) is a bit crude.

”If you rape someone and tell the police that you are a woman, the crime gets recorded as a woman committing it.”

I used to listen to this all the time and have just rediscovered it.    I know some people dislike Radiohead, thinking that they are so glum they make Leonard Cohen seem jolly!   But The Bends is a beautiful and powerful album.  Remember when you listened to whole albums – not just rapid songs on iTunes or Spotify?!    The Bends is a brilliant album and frequently appears in the top 100 critics albums in the world.   In particular I think that the title song, Street Spirit, and Fake Plastic Trees are genius.   It’s one of my favourite albums…

Article of the Week From Gay to Gospel: The Fascinating Story of Becket Cook – 7/10

This article on The Gospel Coalition (US) is well worth ten minutes of your time.

Tim and I would meet for coffee each week, and though I didn’t know why, he was discipling me. That was vital. There were so many others at the church who came around me and supported me, recommending books and sermons and praying for me. I would get random “I’m praying for you today!” texts all the time. I joined a community group right away. I listened to all of Tim Keller’s sermons, as well as John Stott and Dick Lucas. It was a process of people discipling me at my church and God discipling me through these other voices. During that time right after I got saved, I had a three-month period of no work, which was unusual. So I had all this time to spend with God, to pray and read the Bible. I couldn’t stop reading the Bible. Every time I’d listen to a sermon or read the Bible I’d end up in tears: “Oh my gosh, this is true! I can’t believe I know God and know the meaning of life finally!”