Sometimes it’s hard phoning people at home – (speaking of which my parents are apparently about to go online – the revolution has come!).  Apart from the usual reasons – missing them and not having seen them ‘in the flesh’ for a couple of years – there is also the disconnect that comes from being in very different circumstances.  For friends in the UK and USA, it’s winter and Covid is running riot – the UK is now in its third lockdown and, because the politicians need to be seen to do something, their only option, that will not see them destroyed in the press and by the fear of the mob, is to tighten things up.

Speaking of family, I was in a park this week and witnessed something really sad.   A woman was there with her two children who were playing with great excitement on  the swings.  Another woman came in with her daughter and proceeded to spend the next half hour talking on her phone whilst walking up and down to get her steps up.  It was the look on her wee girls face that really got to me.  She was just so sad.  She had no one to play with….and not once in the 30 minutes did she speak to, or acknowledge her daughter.   I wanted to offer to help push the child on the swing – but sadly, such is the society we live in that I feared I would be regarded as some kind of weirdo!    I wanted to say to the woman, ‘put the phone away’ – but then I realised that not only did I not have the right to judge her (maybe there were other things going on apart from the business deals I overheard), but I was a hypocrite.   How often have I gone to the park with the grandkids and taken my phone?   No more.  That’s my late New Year’s resolution!  No phones at the table – no phones in the park – and I was going to say no phones in restaurants – except we now require them to sign in with the NSW app!

The whole episode reminded me of this song.

Covid in the News

Returning to Covid – we really are living in a different world from most of the Western world.  Not that you would know it according to a BBC report I just heard with their correspondent here providing a false picture – giving the impression that we were under hard lock down and facing multiple cases.   Not a mention that there were zero community cases – there are only 38 people with Covid in hospital in the whole of Australia – not a word of this was mentioned on the BBC.  Nor was the fact that NSW has managed to contain it without locking down the whole state.  If you want the real facts and figures I suggest you subscribe to the prayer notes I edit.

How things are reported is fascinating.  For example, we read the headline that there have been 30 deaths in Norway of people with the Pfizer vaccine.  But go beyond the headline and you learn that all who died were elderly, frail people who were nearing the end of life and may have been tipped over the edge of side effects such as sickness.  But people rarely go past the headlines.  So, for example, we read that millions have died from Covid, but it is people who have died with Covid, not all of them will have died from it – any more than the primary cause of death for the 30 Norwegians is the Pfizer vaccine.

Mind you some of the things reported are so absurd that they are hard to believe – like the news that in Queensland it is illegal to drive in your car on your own without a mask!  Politicians always say their laws are ‘following the science’ – I would love to see the science that shows that wearing a mask in a car on your own protects anyone!

In listening to news, we need to be increasingly questioning  – and asking where the reports are coming from.  There are still reliable news sources, but they are getting fewer – as conspiracy theorists populate the Internet and woke journalists dominate the mainstream media.  Let me give just two examples from this weekend.  It seems as though every time I turn on ABC or the BBC,  we get programmes telling us about the threat from the Far Right in the US.  I don’t doubt that there is a threat, but there is little evidence that the US is about to become The Handmaid’s Tale!  And I am intrigued as to why I have yet to hear a programme from either the ABC or BBC which warns about the threat from the Far Left.   Far Right is a term that is far too easily used by lazy journalists and unthinking commentators.

This weekend both the Sydney Morning Herald and The Australian carried full personal stories of parents with transgender teenagers.   They were of course ‘positive’ and ‘trans affirming’.  No criticism is permitted because to go against the story is to be nasty, unloving, judgemental etc.  I remember being ambushed on BBC radio 5 with that tactic, and on BBC news with the same thing – they spend four minutes giving you this heart-rending story and then give you 20 seconds to comment!   I suspect that neither the SMH or the Australian will carry the stories of those who want to detransition, or those who have been significantly harmed by the transgender ideology.  Incidentally, the SMH story reported that there could be up to 3% of people in Australia who are Trans.  They are just making that up.  The actual figure from the last census was less than 0.01%.  That will have gone up when the census is done this year (media and the YouTube dysphoria will ensure that), but the SMH figure was just made up wishful thinking.    It reminds me of the Kinsey reports figure that 10% of men are homosexual – a figure upon which government policy was based long after it was shown to be false (the real figure is around 1%).

Finally, here is something rather good from the BBC….Enjoy this wee video about how in todays society we have to continually be apologising for every group we have offended.  If I have ever offended you please accept my apology – and if you are a Christian remember Christ’s command to forgive me 490 times!

In all of this I am glad that we have the Good News, not only to save us, but to enable us to discern what is right and wrong and what matters in all other news…

Letter from Australia 76  – Brenda is a Sheep.

PS.  The cover photo was from our flat last week.. 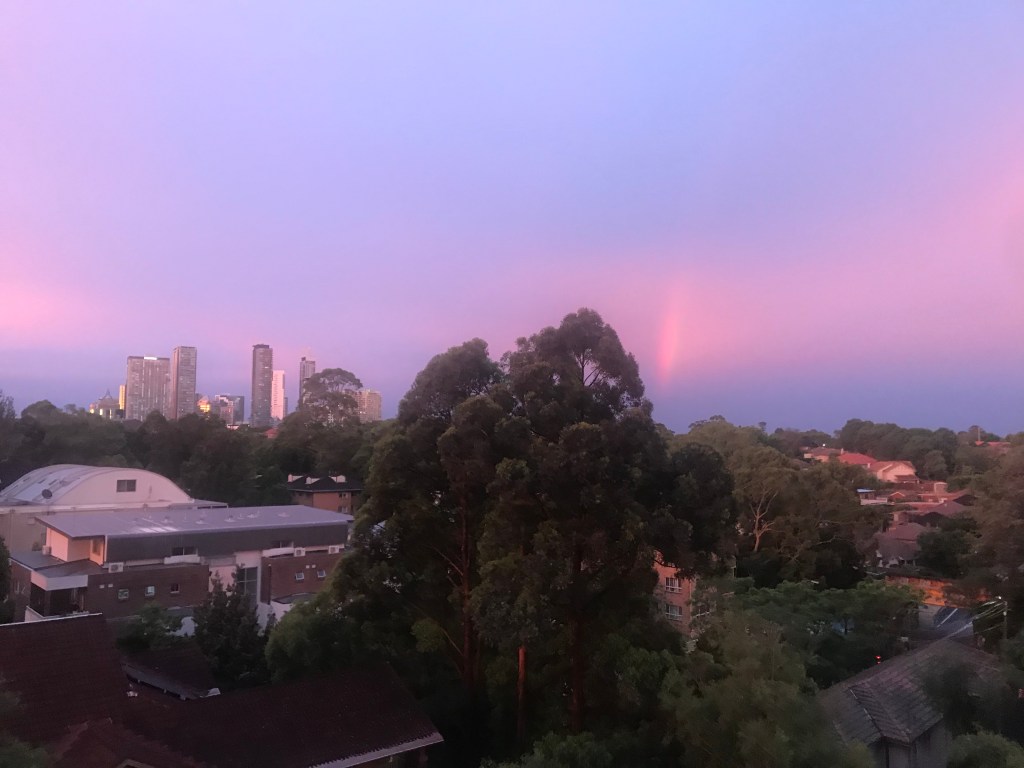