Greetings from an Australia which continues to battle against Covid and so far, seems to be doing rather well (only four community cases in the whole country today – all of them linked to known clusters – only 40 people in hospital in the whole country and none in ICU).   But the leaders are rightly remaining cautious.   Nonetheless I cannot help but feel we are well protected and privileged.  I hope we will use that well.  I write Covid prayer notes every week for Australian Christian media – which contain World and Australian figures – you can get the latest one here – https://christiansunited.online/2021/weekly-prayer-guide-10th-january-2021/

This virus is not the only one plaguing the world.  There seems to be a bizarre collective madness which has gripped the elite sections of Western society – that is the desire to confuse humanity by divorcing gender and sex from biology.  The transgender fad is spreading virus like and those who promote it have a particular desire to instil their unscientific and dangerous ideology in children – in what can only be described as a form of child abuse.

Back in my beloved Scotland, that madness has a particular grip amongst the civic elites. I was sent this video this week.

‘Brenda is a Sheep’ is a book which of course has been shortlisted for the Bookbug Picture Book Prize and more alarmingly is being given to all primary one pupils in Scotland.  That is to five-year-olds.

It is a grossly irresponsible and grotesque piece of propaganda which has a harmful message.   The story begins well enough – Brenda is a wolf who dresses up in sheep’s clothing and dreams of eating the sheep with mint sauce.   At that point, aka Little Red Riding Hood, this could be a cautionary safeguarding tale about the dangers of predators – which our children sadly do need to be warned about.   But this is 2021 and so Brenda can be whoever she wants to be.  When she is presented with grass in mint sauce, Brenda decides not to eat the sheep because, amazingly overnight she has become a sheep.   In fact, as a wolf in sheep’s clothing she is even better than the real sheep. 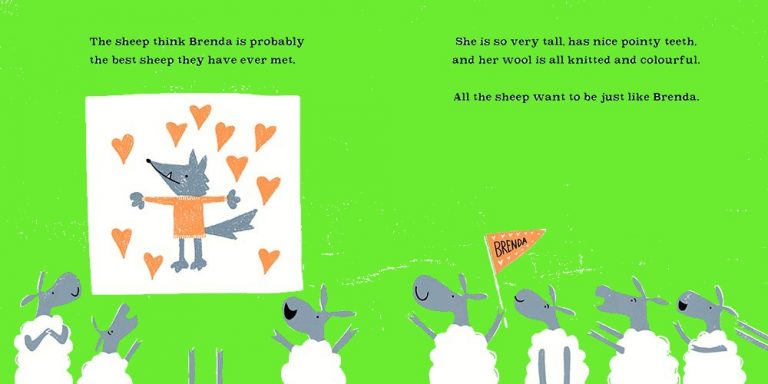 What a wonderful message to give to children!  Be nice to predators and they won’t harm you!  It’s also a lie – wolves are meat eaters – they don’t change when you dress them up in sheep’s clothing and offer them a hug!  Wings Over Scotland – https://wingsoverscotland.com/brenda-isnt-a-sheep/ has an excellent comment – “As it is, the book ends, but nobody’s living happily ever after. Later that evening, or the next day or the day after, Brenda’s carnivorous wolf stomach is going to be grumbling and churning, because grass just won’t quell Brenda’s craving, and someone’s going to have a grisly job picking up the bloody wreckage of what happens next.Don’t say you weren’t warned. Don’t say nobody told you.”

In the video in the Wings article, the man reading the story is a ‘safeguarding lead’ at a primary school!

The Scottish government is promoting a book which tells children that wolves can become sheep – just as men can become women.   After all we are all fundamentally good – and can be whatever we want to be.

It reminds me of an exchange I had in a bookstore in Cambridge once.  A young atheist man told me that he had actually enjoyed the talk I had given and that I wasn’t as evil as he had been told, but he was puzzled by one thing.  “You seem to have a very low opinion of human beings…you don’t think that humans are basically good”.

I replied,  “I have a very high opinion of human beings – they are made in the image of God.  But I also know that we are no longer good – there is evil in every one of us.”

“That’s a very negative view – I believe that human beings are fundamentally good”….

”Do you have any evidence for that belief?”

“No – but I have to believe it – do you have any evidence the other way?”.

“Yes – we are in a bookshop – wander over to the history section and bring me any book and I will prove to you that we are flawed and fallen creatures!  Your faith, without evidence, that human beings are good, is a delusional and dangerous belief”.

“How can it be dangerous to believe people are good?”

“Imagine my 7-year-old daughter coming home to me and saying , ‘Dad, I met a man in the park who was so nice.  He gave me sweets and lollies and he asked if I would like to go to his house and play games with him – can I go?  He was such a nice man!’.   If I believe that human beings are fundamentally good and act on that belief by letting my daughter go – how dangerous and stupid is that?”.  He got the point.

But now children in Scotland are being taught that all you need to do is be nice to those who want to eat you, and all will be well!

But don’t worry – apparently all wolves are really sheep!  (Unless perhaps they are right wing ones…perhaps if I write a children’s book about a sheep called Boris and entitle it ‘Boris is a wolf’ I could win the next prize and all children in Scotland could be given it to warn them that Tories will eat you!?)….

The Scottish government has other things to worry about just now – with Nicola Sturgeon being accused of lying to the Scottish Parliament by Alex Salmond.  If that is true, then I cannot see how she could remain – but in a world where wolves can be sheep – I guess proven liars can be First Minister.

Oh Scotland, my Scotland!  You have moved from being the land of the people of the Book, where children were taught ‘The Lord is my Shepherd’ to a land where children are taught to trust wolves in sheeps clothing! We can barely teach children to read (see The De-Enlightenment of Scotland – Thoughts on a Brilliant Article )but we can teach them that you can be whatever you want to be.

When will parents, teachers and the churches wake up to this dangerous indoctrination that is being spoon fed our children?   I will teach my grandchildren that there are sheep, and there are wolves, and that there is only One Good Shepherd who can, and will protect them…

Brenda is a Sheep – The Scottish Government Responds.

Letter from Australia 75 – The End of (Spiritual) Drought?