This is my first foray into the murky world of Australian media and politics.

In Defence of The Australian

For years I have loved getting the same daily papers – over the past years I have subscribed to The Scotsman, The Guardian, The Herald, The Press and Journal, The Dundee Courier, The Independent, The Telegraph and more recently online – The Times and  The New York Times.  I remember calling the editor of the Scotsman to explain why I was cancelling my over 20-year subscription – “You used to be a newspaper – now you have just become a gossip column and advertising rag for the Edinburgh middle classes”.  As far as I recall he agreed – pointing out that circulation was dropping, and they were relying on advertising – which was aimed at the Edinburgh middle classes.

Last week I cancelled my subscription to the New York Times (its censorship of those even within its own staff who don’t buy into the Woke agenda and it’s ridiculous and laughable dumbed down reporting on Brexit and the Australian bushfires pushed me over the edge).   I also cancelled The Telegraph – which leaves me only with Dundee’s finest – The Courier.  I wanted to subscribe to an Australian newspaper and for the past months have been getting The Sydney Morning Herald and The Australian.   The former has been a major disappointment – it’s like a dumbed down Guardian – with little substantive news and a political and social bias which means it is only suited for the ABC and those who live in Newtown!  I didn’t expect to agree with its social views but the lack of diversity of opinion and the appalling dumbed down nature of what used to be a once proud newspaper has been depressing.

“You can’t read The Australian” they said.  It’s owned by Murdoch (boo, hiss!).  But I don’t really care who owns it.  I look for a newspaper that informs me, feeds my mind and is worth the paper it is printed on!  I have been surprised and delighted by The Australian – it actually has real news and culture – in some depth.   I love reading it.   Journalists like Greg Sheridan, Janet Albrechtsen and Jacinta Nampijinpa Price are worth the price of the paper alone.  It’s such a pleasure to sit down with a coffee, a pastry and read a broadsheet which takes you more than five minutes to get through!

So, I subscribed.  I get the print and the online version, and they are both wonderful.  One very happy punter here – until this weekend challenged my perception.  What happened?  Apart from the fact that our Weekend Australian was not delivered (I’m such a fan I went out and bought one anyway!), the problem was that The Australian was caught out being racist and sexist.  How do I know?  Because Kevin Rudd former Labour Prime Minister of Australia told us so – several times.   A cartoon by Leak about Joe Biden was the cause of this  outrage.  Today he even used as evidence the New York Times – apparently blissfully unaware that the NYT will jump on every Woke bandwagon.

Good to see the broad backlash across Australia to the Murdoch media’s racist, sexist cartoon attacking vice-presidential candidate Senator @KamalaHarris is now attracting coverage in the US itself, including the @NYTimes. Murdoch does not speak for us.

ABC journalist Michael Rowland impartially joined in the Twitter mob by declaring that he felt sorry for the ‘really good journalists’ (i.e. those who share his political perspective and social views) who worked at The Australian being tainted with such a cartoon.  In passing I note that the ABC is an excellent organisation which is sadly being destroyed from within by the cancer of woke progressivism.  I’ve got to know a couple of journalists involved with them, and whilst they love the organisation, they admit that for the ABC diversity does not mean diversity.  Anyone who does not buy into their political and social ‘values’ will not last long.

Reading the Twitter mob was both amusing and depressing.  The woke troops couldn’t quite make up their mind whether they should take the opportunity to denounce its obvious racism, or whether they should encourage people not to discuss it as it was equally obviously a publicity stunt.  Julia Baird told us that on her ABC programme.  “hard agree.  We won’t be discussing it”.  There is apparently no discussion to be had.    It’s racist – and if you don’t agree its racist you are beyond the pale!

So, let’s have a look at this cartoon: 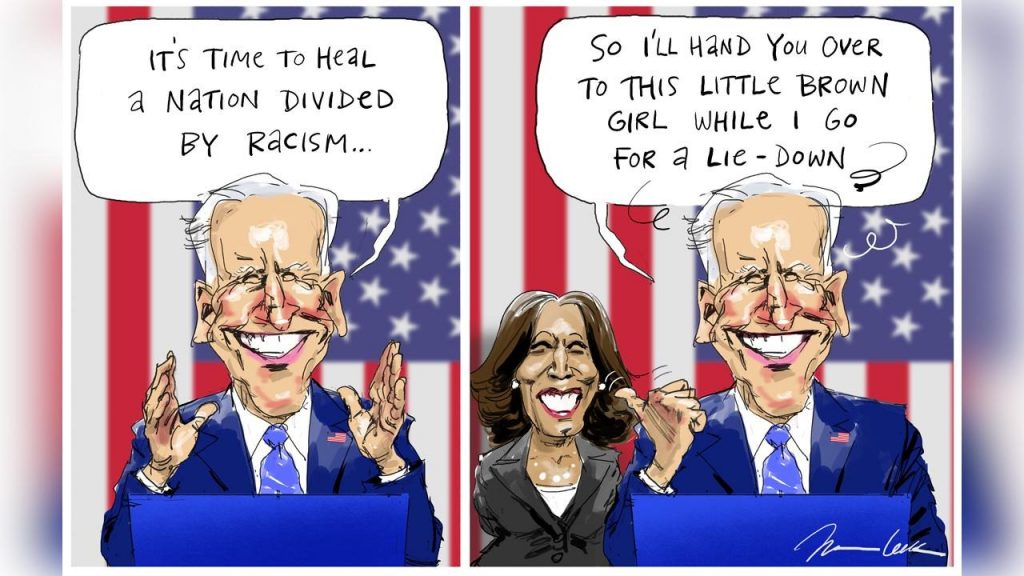 What is wrong with it?   If the cartoonist was calling Kamala Harris a ‘little brown girl’ he would deserve the accusation.  But he isn’t.  He is just repeating Joe Biden’s words.  He is mocking Biden’s soft racism (and incidentally somewhat cruelly his apparent dementia and incoherence – but none of the woke brigade have complained that the cartoon is ageist! I guess it’s all a question of priorities).

This is what Biden tweeted.

As Jacinta Nampijinpa Price wrote in her excellent article (in The Australian!):

“Imagine the left’s reaction had US President Donald Trump announced the appointments of Small Business Administrator Jovina Carranza as “bringing hope to Mexican girls” or Secretary of Transportation Elaine Chao as “bringing hope to Asian girls” — let alone referring to them as perhaps “brown” or “yellow”.

There is no doubt that Kamala Harris was chosen as Biden’s VP because of her gender and race, not primarily her abilities.  There is a case that can be argued for that, but to my mind it is a route that leads to both sexism and racism.  Barack Obama was chosen because of his ability not his race – thereby showing that in America it is possible that Martin Luther King’s dream of a nation where people would not be judged by the colour of their skin could become reality.  Sadly, BLM and all their so outraged supporters have set back that dream decades.  I find it somewhat ironic that the most virulent BLM supporters tend to be white people who are seeking to deal with their own (and others) internalised white fragility.

This cartoon is mocking Biden’s ‘anti-racist’ racism and sexism – as well as his age and his incoherence. It may be harsh, but it is not remotely racist.  The trouble is that although the cartoon is anti-racist, it is not the ‘right’ kind of anti-racism and therefore must be condemned as racist.   Like when Biden claimed that black people who voted for Trump (and there were a significant number) were not really black!  Or that Latinos are more diverse than African Americans. You will search in vain for the outrage from Kevin Rudd and the woke community – they perceive Biden as being on their side and so his racist remarks cannot be racist because self-evidently they are not racist (although all white people are racist)…It’s hard to keep up with the convoluted ‘reasoning’.

There is yet another intriguing aspect to this.  It has been alleged and seems to be true (her father wrote this in support) that Kamala Harris’s great-great-grandfather was himself a slave owner – Hamilton Brown owned at least 100 slaves. Now I don’t think that someone should be judged today by their ancestors – but that is not the standard of the woke progressives – so will they be consistent?

What is even more interesting is that she accused him of supporting racists and opposing bussing.   Then when Biden was accused of sexually inappropriate behaviour towards women she stated ““I believe them, and I respect them being able to tell their story and having the courage to do it,”.   When she was challenged about the accusations, she made against Biden she told Stephen Colbert ‘it was a debate’. Watch this – its astonishing.

Does this mean that what she (or indeed any politician) says in a debate is not to be considered truthful?   Amazingly Colbert, again in that impartial way that reporters seem to have, let her away with it.  Imagine if Trump had responded to a similar question by saying ‘it was a debate’ – the mockery and accusations would have been endless.  (By the way I don’t think Biden is racist – at least not by my standards and not any more than Trump is – but the trouble is that by the standards of the Woke progressives he is just as racist as Trump – but the hypocrisy is that they won’t call him out for it – as they do Trump).

Speaking of media hypocrisy – let’s turn to The Guardian who would have course, like the NYT and ABC, jumped on the bandwagon and condemned Leaks anti-racism cartoon as racist.  This is the same Guardian that published Steve Bell’s overtly racist and misogynistic cartoon about Pritti Patel – portraying her as a fat Indian cow! 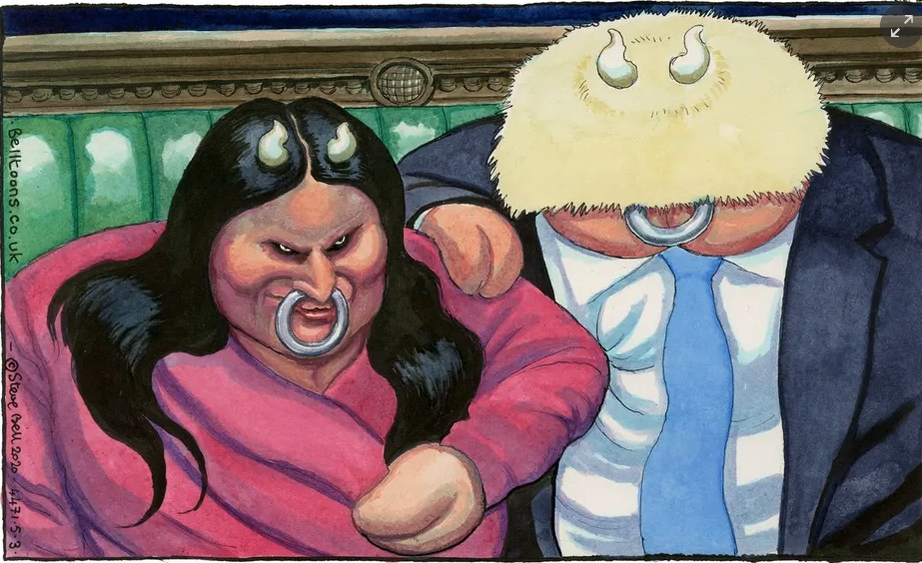 I wonder if Michael Rowland and Kevin Rudd joined in the condemnation of this – with the same vigour they piled on Leak.

When the manufactured political, woke, social media ‘outrage’ started I feared that The Australian would do the usual thing that Western corporates and media engage in – a ‘sincere heartfelt’ apology for any ‘hurt’ caused and a promise not to do it again.  But I was wrong.  The editor made a robust defence of their cartoonist and as well as Jacinta’s article published this one by Janet Albrechtsen.

At last a newspaper that not only prints news and treats its readers as thinking adults, but one that has courage.  I’m glad I subscribed.