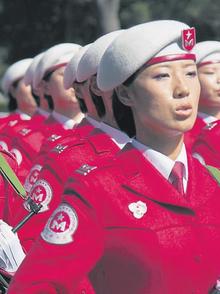 In one sense we are. As Vishnal Mangalwadi points out in his book The Book That Made Your World, the West was largely founded upon Christian values and biblical foundations. For those of us who are Christians who care about the world, and the glory of God within it, we should care. It may be that the 21st century will, in church terms, be the age of Asia and Africa, but that does not mean we should be blasé about the demise of the first continent to be brought to Christ.

We should weep over it, as Christ wept over Jerusalem. As Augustine saw the demise of The City of God in the Roman world – so we must take this particular opportunity to reflect upon what is happening in our world – and by the mercy of God, to strengthen what remains and is about to die. This month I want to reflect on the enemies that our civilisation faces – next month we will look at the enemies the church faces.

The Chinese version of communism is far more successful and virulent than the Russian or that of any of the Western Marxists. I have recently read Hamilton and Ohlberg’s Hidden Hand – Exposing How the Chinese Communist Party is Reshaping the World. It is an astounding book and one that should be read by every political leader, church leader and anyone interested in what is going on in the world. Even as the Chinese Communist Party (CCP) is imprisoning and abusing 1 million Uygur Muslims, destroying churches, and taking over Hong Kong, it is using the West’s own corporations, media, politicians and educational institutions to destroy it from within.

The recent turning of the Hagia Sophia into a mosque by President Erdogan of Turkey is of far more significance than just internal Turkish politics. This is Erdogan setting himself and Turkey up as the leaders of a resurgent Islam in the Middle East. Turkey is extending its muscle in Libya, the Mediterranean and as far as Qatar. It’s no wonder that Greece is nervous.

This goes under various headings, with Cultural Marxism and Secular Humanism included under the term ‘progressive’. Most politicians, media leaders and corporations want to be seen as ‘progressive’. Sadly, most have no real idea of what it means or what we are ‘progressing’ to. In reality we are not progressing, but regressing to the world views of the pre-Christian Greco/Roman/Pagan Europe. Progressivism is the cancer that is eating the heart and soul out of the West. We witness its results on the streets, screens and seminaries of our culture every week, as the Woke stormtroopers bring their Maoist doctrines into practice.

I include in this those who seek to make money out of others’ needs and greeds. It is interesting that the major corporations, some of whom have budgets bigger than small nations, seem to have no difficulty in aligning themselves with the previous three enemies. The corporates prefer authoritarian systems and confused ideologies – without any of those pesky Christian checks and balances which derive from the Bible.

Human beings want to be in charge. Most of all we want to be in charge of human life. To determine who is born and when we die. As a result, in the West, where life was once valued, now it has become cheap. In the utilitarian, rich man’s world, people are little more than commodities and economic units – to be used and dispensed with as we please. It’s not just the sheer scale of the abortion genocide, but also the increasing acceptance of euthanasia and the re-introduction of slavery to Western society, which demonstrate this cheapening.

Much of this stems from human ignorance and arrogance. The West has become hubristic. We think that ‘Western values’ are in fact, or should be, the world’s values. We have no concept of all laws coming from the Absolute Lawgiver. We think that humankind is just evolving into a humanist Nirvana – and the West just happens to have evolved further. It’s why we seek to impose abortion on to other ‘less developed’ nations. We are so proud that not even our economies being wrecked by a tiny virus can humble us. We believe we are so great that we can deal with Covid-19 and fix the climate, when we can’t even fix our own backyards.

It’s not too difficult for us to see the threats – but where are the opportunities? Where will salvation come from? Next month we look at the institution that is both the cause and the salvation of the West – the church.

David Robertson is the Director of Third Space in Sydney and blogs at www.theweeflea.com