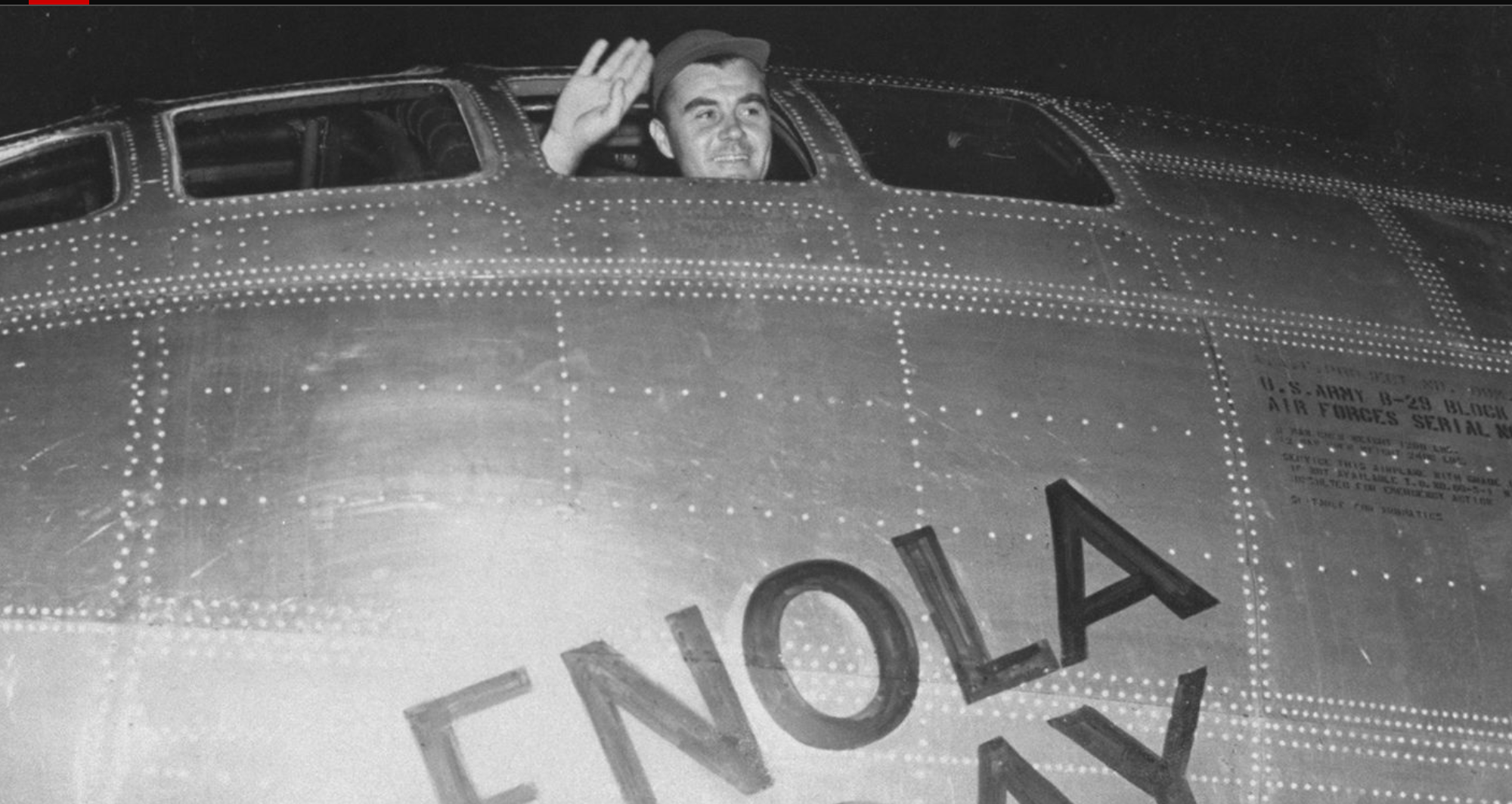 Quantum this week remembers the 75th anniversary of the dropping of the nuclear bombs on Hiroshima and Nagasaki.   But we begin with John Hume –

And then a recap on last weeks China episode–   including the extraordinary story of the University of New South Wales, censoring one of its own lecturers for supporting Hong Koong students.

This week there was this devastating explosion in Beirut –

This is a chilling photo  – A man smiles on his way to annihilate 100,000 people in a plane named after his mother….

Hiroshima and Nagasaki have dominated much of the worlds culture since 1945 – none more so than in Neville Shute’s despairing brilliant novel – On the Beach – showing Melbourne as the last place on earth to be wiped out by nuclear fall out….

And much music also reflects on the end of the world –

With nuclear war, Covid 19, climate change it does seem as though we are living in apocalyptic times… What should our attitude be?  Dave Rubin – has one solution.

“In a time when the standard of living has never been higher, we are acting like the world is coming to an end. Whether you’re a baby boomer addicted to watching cable news, a Millennial hooked on Twitter conflict, or a Zoomer who comes home from school fearing the end of the world because of climate change, I’m here to tell you to cool your jets.. Psychologists have a word for this behaviour…catastrophising. When we catastrophise, we engage in an irrational thought process that leads us to believe something is far worse than it actually is.” Dave Rubin – Don’t Burn This Book – p. 196

I prefer the biblical answer…

Rom. 8:18 I consider that our present sufferings are not worth comparing with the glory that will be revealed in us 19 For the creation waits in eager expectation for the children of God to be revealed. 20 For the creation was subjected to frustration, not by its own choice, but by the will of the one who subjected it, in hope 21 that the creation itself will be liberated from its bondage to decay a and brought into the freedom and glory of the children of God. We know that the whole creation has been groaning as in the pains of childbirth right up to the present time.

The creation is groaning, but God is sovereign and we live in the hope of a renewed world.

Finally there is this beautiful song – The Clock of the World…I love the line about keeping perfect holy time.

Somewhere bells are ringing, somewhere someone’s marrying
Or a casket someone’s carrying – A crowd somewhere is gathering
Somewhere a bell is marking what is passing and sublime
Like the clock of the world keeping perfect holy time
I am listening for a church bell and I know somewhere it rings,

See you next week…..

Feel free to keep sending me news and ideas – and pass this on to whoever you think it may help.

And you can support Quantum here – https://patron.podbean.com/theweeflea