J K Rowling has done it again.  She has responded to her enemies with grace, style and intelligence on Twitter.   How dare she?!  Doesn’t she know that that is not what Twitter is for?!   She even spends a great deal of time tweeting about pictures that children have sent her.  My admiration for her just keeps growing – as does the vile, vitriolic, misogynistic abuse she receives.

Rowling has also, along with 150 academics and writers signed this letter in Harper.  It’s an important letter signifying a clear change in our cultural zeitgeist.   And again it has received  a predictable outcry with one staff member in Harpers complaining it should not have been published because it ‘hurt’ them – thus ironically proving their point!.    (I have added the full text of the letter at the end of this blog).

“Many, myself included, believe we are watching a new kind of conversion therapy for young gay people, who are being set on a lifelong path of medicalization that may result in the loss of their fertility and/or full sexual function.”

The Courier in Dundee has had two lengthy letters from Perth Pride – attacking J K Rowling and once again seeking to intimidate and indoctrinate.   I waited for people to respond – especially the Church of Scotland to which she belongs – but unless I missed it – there was silence.  It’s amazing how they can speak on behalf of the EU…the Trans movement and many other Woke causes – but not a word in defence of one of their most famous members….

I wrote a response to the Courier which they published in an edited form.  I attach that and the original letter I sent – it’s always interesting to see how one’s letters are edited!  It says a great deal both about the writer and the editor…. 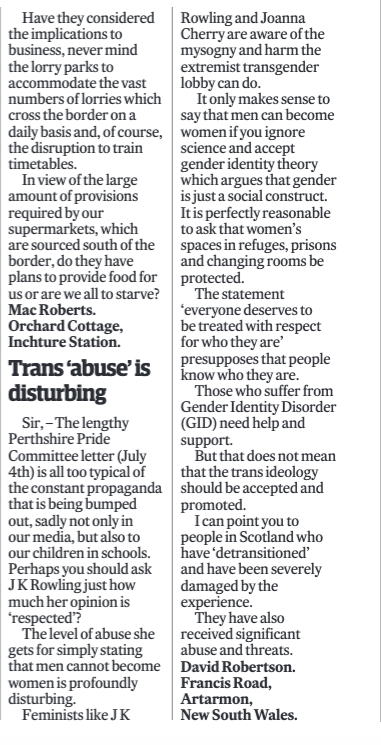 The lengthy Perthshire Pride Committee letter (July 4th) is all too typical of the constant propaganda that is being bumped out, sadly not only in our media, but also to our children in schools. Perhaps you should ask J K Rowling just how much her opinion is ‘respected’? The level of abuse she gets for simply stating that men cannot become women is profoundly disturbing. Feminists like J K Rowling and Joanna Cherry are aware of the mysogny and harm that the extremist Transgender lobby can do.

It only makes sense to say that men can become women if you ignore science and accept the unscientific ideology of gender identity theory which argues that gender is just a social construct. It is perfectly reasonable to ask that women’s spaces in refuges, prisons and changing rooms be protected. The statement ‘everyone deserves to be treated with respect for who they are’ presupposes that people know who they are. Take the case of the woman who claims she is a cat…and others who claim transpecies status – should society agree with this self-designation?

Those who suffer from Gender Identity Disorder (GID) need help and support. But that does not mean that the Trans ideology should be accepted and promoted as truth when it does so much harm. I can point you to people in Scotland who have ‘detransitioned’ and have been severely damaged by the experience. They have also received significant abuse and threats. Perhaps one day newspapers will tell the other side of this tragic story?

The Harper Letter – signed by Rowling and others

Our cultural institutions are facing a moment of trial. Powerful protests for racial and social justice are leading to overdue demands for police reform, along with wider calls for greater equality and inclusion across our society, not least in higher education, journalism, philanthropy, and the arts. But this needed reckoning has also intensified a new set of moral attitudes and political commitments that tend to weaken our norms of open debate and toleration of differences in favor of ideological conformity. As we applaud the first development, we also raise our voices against the second. The forces of illiberalism are gaining strength throughout the world and have a powerful ally in Donald Trump, who represents a real threat to democracy. But resistance must not be allowed to harden into its own brand of dogma or coercion—which right-wing demagogues are already exploiting. The democratic inclusion we want can be achieved only if we speak out against the intolerant climate that has set in on all sides.

The free exchange of information and ideas, the lifeblood of a liberal society, is daily becoming more constricted. While we have come to expect this on the radical right, censoriousness is also spreading more widely in our culture: an intolerance of opposing views, a vogue for public shaming and ostracism, and the tendency to dissolve complex policy issues in a blinding moral certainty. We uphold the value of robust and even caustic counter-speech from all quarters. But it is now all too common to hear calls for swift and severe retribution in response to perceived transgressions of speech and thought. More troubling still, institutional leaders, in a spirit of panicked damage control, are delivering hasty and disproportionate punishments instead of considered reforms. Editors are fired for running controversial pieces; books are withdrawn for alleged inauthenticity; journalists are barred from writing on certain topics; professors are investigated for quoting works of literature in class; a researcher is fired for circulating a peer-reviewed academic study; and the heads of organizations are ousted for what are sometimes just clumsy mistakes. Whatever the arguments around each particular incident, the result has been to steadily narrow the boundaries of what can be said without the threat of reprisal. We are already paying the price in greater risk aversion among writers, artists, and journalists who fear for their livelihoods if they depart from the consensus, or even lack sufficient zeal in agreement.

This stifling atmosphere will ultimately harm the most vital causes of our time. The restriction of debate, whether by a repressive government or an intolerant society, invariably hurts those who lack power and makes everyone less capable of democratic participation. The way to defeat bad ideas is by exposure, argument, and persuasion, not by trying to silence or wish them away. We refuse any false choice between justice and freedom, which cannot exist without each other. As writers we need a culture that leaves us room for experimentation, risk taking, and even mistakes. We need to preserve the possibility of good-faith disagreement without dire professional consequences. If we won’t defend the very thing on which our work depends, we shouldn’t expect the public or the state to defend it for us.