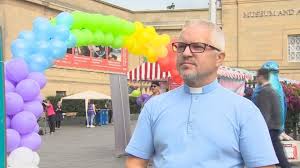 Maybe I’ve got this one wrong.   Maybe the first Pride festival in Perth held last weekend IS something to be proud of?   After all the press and politicians are unanimous in their praise – even the clergy joined in.  The local Council thought it was so valuable that they contributed £7,000 towards the running costs. […]

Maybe I’ve got this one wrong.   Maybe the first Pride festival in Perth held last weekend IS something to be proud of?   After all the press and politicians are unanimous in their praise – even the clergy joined in.  The local Council thought it was so valuable that they contributed £7,000 towards the running costs. Surely only the most sanctimonious, placard waving bigot could have any questions at all about it? Have a look at this summary from STV news.    Surely this is something for Perth to be proud of.

So lets imagine that the press, the politicians and the pastors are all right.  What would it mean.  Rev. Scott Burton explained to the crowd.  Here is his full speech.

Lets say that Scott (and the politicians and press) were right.  What would it mean?  Apart from ‘love, love, love’?

It would mean that the Bible got it wrong – and we have to, in his words, work out ‘what these ancient words mean in the world today’ and ‘rewrite our understanding of the Bible’.

It would mean that Jesus got it wrong when he spoke of marriage as being between a man and a woman.   We his followers would have to correct him and enlighten the Light of the world.

It would mean that the Church throughout the ages, the Church of Scotland up until last year and most of the Church today, has got it wrong and needs to repent and apologise, as Rev Scott did.  (although I note in passing how easy it is to say sorry for other peoples sins!).

There really are no two ways about this.  Forget all the talk of ‘respectful dialogue’, if Scott is correct then those in the Church who hold to the teaching of Jesus that marriage is between a man and a woman should be on their knees in abject repentance as though they were racists who had been converted to a more biblical loving position.

It would also mean that at last the society and the church were at one – sharing the same values, having the same agenda.  Suddenly everything is brought into alignment, everything is peace, love and harmony as the inevitable march of progress continues….

It does seem inevitable doesn’t it?  Yesterday for example Vicky Beeching was on BBC Hardtalk getting some softtalk and telling us all that change in the Church was inevitable.  A message she repeated as her ‘mission’ on ITV’s ‘Lorraine’ that same morning.

” ‘If liberty means anything at all, it means the right to tell people what they do not want to hear.’ George Orwell

Another Perth minister has a different perspective about what went on in his city – Rev. Paul Gibson of Knox Free Church stated:

“This was a desperately sad and tragic moment for the witness of the Christian gospel in Perth and indeed in our land. In apologising for the hurt which the church has caused to those in the LGBT community, it could hardly be missed that what Mr Burton was really apologising for was the plain teaching of Holy Scripture and God’s accepted order for sexual intimacy. To do so at the opening of an LGBT event was effectively the same as encouraging those who feel trapped in a lifestyle that the bible describes as sexual immorality, to simply carry on. Mr Burton spoke in his speech of love, but if he really loved those he was addressing he would have surely told them of Christ, whose mercy and forgiveness always goes hand-in-hand with His grace of repentance – a turning away from sin.”

Now…indulge me for a moment – what if Paul is right?  What if Scott, the press and the politicians have got it all wrong?   What would that mean?

It would mean that much of the church have turned away from the teaching of the Jesus they profess to follow.  A disaster and the end of the church.

It would mean that instead of apologising to the current in-groups in society, Scott should be apologising to God – for the horrendous sin of distorting and perverting His gracious Word.

It would mean that instead of turning towards Love, we are turning away from Him.  Chanting ‘love, love, love; without being able to define Love or distinguish it from lust is not only meaningless but harmful.  Its like a chef shouting ‘food, food, food’ whilst never cooking anything or having anything to offer, other than poison.   Paul in Romans 1 (the passage at the end of this article) says that rather than bringing in love, turning away from God means we end up with ‘no love’.

It would mean that instead of helping people we would be harming them.  Telling them the lie that ‘you are who you are, you are who God created you to be’, rather than pointing out that we are all ‘dead in sins and trespasses’ and that we all need the new birth, a new heart and a new creation.   Telling people on the road to destruction (all of us by nature) that they are on the right path is about the most cruel and unloving thing that anyone could do.

It would mean that the society and its leaders would regard us as shameful, evil and not worthy members of their society.

It would mean that Perths’ Pride is actually Perths Shame.

Unlike the cartoon version of Christians who believe the Bible presented by Rev. Scott – those of us who follow Jesus, should be weeping for the city of Perth and the nation of Scotland.  We are not going to stand at Pride parades with banners and signs (we don’t use the weapons of this world), but we are going to pray.  And we are going to proclaim the Good News of the Jesus who was prepared to go against the zeitgeist of his day and take on the powers that be (the politicians, the press and the priests) – without bitterness and without anger and without hatred.    We too will say sorry….we will repent – of our own indifference, lack of love and passion.  Those of us who are in the Church of Scotland (especially the Presbytery of Perth) will be calling on Scott to repent, not to rejoice in his apostasy.   Rivers of tears run down from our eyes because Gods law is not obeyed.  We will plead before the Lord not to let us go our own way…and to turn us back to his…before we destroy ourselves and our children.

I leave you with Pauls words to the Christians in 1st Century Rome which are as relevant today as they were then…(and don’t need to be rewritten or re-interpreted by Rev. Scott or his colleagues).

Rom. 1:18    The wrath of God is being revealed from heaven against all the godlessness and wickedness of people, who suppress the truth by their wickedness, 19 since what may be known about God is plain to them, because God has made it plain to them. 20 For since the creation of the world God’s invisible qualities—his eternal power and divine nature—have been clearly seen, being understood from what has been made, so that people are without excuse. Rom. 1:21    For although they knew God, they neither glorified him as God nor gave thanks to him, but their thinking became futile and their foolish hearts were darkened.

22 Although they claimed to be wise, they became fools 23 and exchanged the glory of the immortal God for images made to look like a mortal human being and birds and animals and reptiles. Rom. 1:24    Therefore God gave them over in the sinful desires of their hearts to sexual impurity for the degrading of their bodies with one another. 25 They exchanged the truth about God for a lie, and worshiped and served created things rather than the Creator—who is forever praised.Amen.

Because of this, God gave them over to shameful lusts.Even their women exchanged natural sexual relations for unnatural ones. 27 In the same way the men also abandoned natural relations with women and were inflamed with lust for one another. Men committed shameful acts with other men, and received in themselves the due penalty for their error.

Rom. 1:28    Furthermore, just as they did not think it worthwhile to retain the knowledge of God, so God gave them over to a depraved mind, so that they do what ought not to be done. 29 They have become filled with every kind of wickedness, evil, greed and depravity. They are full of envy, murder, strife, deceit and malice. They are gossips, 30 slanderers, God-haters, insolent, arrogant and boastful; they invent ways of doing evil; they disobey their parents; 31 they have no understanding, no fidelity, no love, no mercy. 32 Although they know God’s righteous decree that those who do such things deserve death, they not only continue to do these very things but also approve of those who practice them.”

Full Services from St Peters – What the Bible Says About Sexuality and Jesus, The Word

Footnote – The Courier reported on this blog  – here