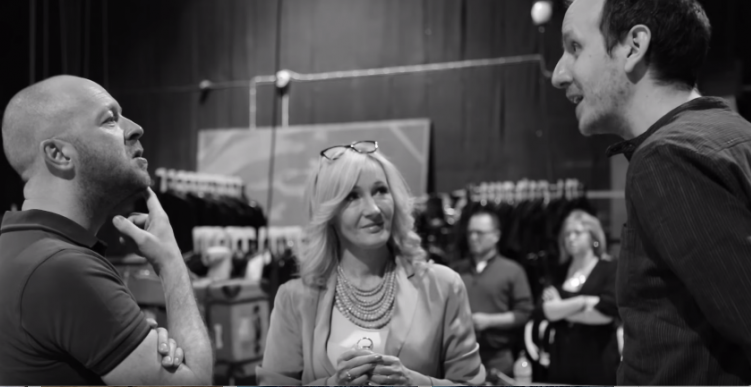 There is a lovely café in Edinburgh called the Elephant House. It was a place I used to frequent in my student days – for coffee, cake and writing. Another aspirant writer had the same idea. Her name was J K Rowling, who has since become one of the biggest selling authors of all time – selling over 400 million of her Harry Potter series. The Elephant House even has a wee plaque indicating that this is where Harry Potter was birthed. But one wonders how long it will last in today’s intolerant culture. For J K Rowling – once the darling of the literati – has sinned against Woke culture and the revolution is about to eat her.

Last December, she tweeted her support for Maya Forstater, a tax specialist who lost her job for allegedly tweeting ‘transphobic’ comments. The level of abuse and hatred Rowling got (she has 14.5 million followers) persuaded her to step back from Twitter because it wasn’t doing her mental health any good. She returned to share a free children’s book and inadvertently tweeted about an article that had referred to “people who menstruate”.

“I’m sure there used to be a word for those people. Someone help me out. Wumben? Wimpund? Woomud?” she wrote.

The backlash has been ferocious and revealing.

You have to stop, take a deep breath and try to grasp what is happening here. Because a woman objects to women being called ‘people who menstruate’ rather than women, she is treated as though she is a racist Nazi. The misogynistic abuse is breathtaking. Her books have been burned and in this ‘cancel culture’ world she is being cancelled in many places.

My favourite is the school in West Sussex, which has cancelled the idea of one of its ‘houses’ being named after Rowling because “it did not wish to be associated with these views”. The letter from the deputy headteacher Sarah Edwards is a masterpiece of newspeak. Despite cancelling Rowling because she “may no longer be an appropriate role model for our pupils”, Mrs Edwards says the school is “inclusive” – except of course for those who think that being a woman has something to do with biology”. She adds that “as a school, our business is education, it’s not about coming down on one side or another”. To which one can only respond by wondering whether real biology is taught in the school – or logic?

The school actually illustrates the madness of modern culture. Its houses were previously called Austen, Darwin, Elgar, Livingstone and Wilberforce. Now they are all to be renamed “to make them more representative of gender, ethnicity, and sexuality/gender identity”. One wonders in passing why the school is discriminating against the protected characteristic of religion?. One of the houses is to be named after Freddy Mercury, who the school clearly sees as a suitable role model for pupils!

It’s also revealing how Rowling has been dealt with. She wrote an incredibly moving, gracious, articulate, personal blog explaining why she was taking the stand she does. She revealed details of her own personal abuse, concern for transgender people and gave detailed arguments, reasons and facts. J K Rowling is a fabulous writer and in this piece she came across as a wonderful, compassionate, intelligent human being.

But that did not stop the wolves from circling. In fact it seems as though the more gracious she was, the more virulent the attacks; the more intelligent, the dumber the responses; the more conciliatory, the more she had to be cancelled. Feminazi, Terf, Witch were some of the milder names that she was called in social media. But it wasn’t just social media. The mainstream media sometimes joined the pack. Several newspapers carried op-eds and opinion columns that both explicitly and implicitly attacked Rowling. One of the most invidious methods is when they get a trans ‘victim’ who has struggled with their identity to write a piece stating that Rowling is responsible because of her outdated views.

Harry Potter film stars were cited disowning Rowling. Daniel Radcliffe, who played Harry Potter, wrote an article in which he repeated the doctrine of the zeitgeist that “transgender women are women” – thus we were faced with a man who went to a male only school, mansplaining to an older woman what a woman is! Emma Watson (Hermione) was pictured with a t-shirt saying “trans rights are human rights”. Rupert Grint (Ron) gave us the following pearl of wisdom, “Trans women are women, trans men are men.” He then showed where this was coming from when he said: “I echo the sentiments expressed by my peers,” before adding, “We should all be entitled to live with love and without judgement.” Grint seemed unaware that he had just issued a press release judging Rowling and joining in the hate fest against her. Perhaps, ‘love is love’ only when people agree with you.

In the wider context, this is all part of the Woke cultural revolution that is taking place – one which bears an uncanny resemblance to the Maoist Cultural Revolution. It sought to get rid of the four ‘olds’ – old ideas, old culture, old customs and old habits. The new Cultural Revolutionary Guards are also determined to stamp out old ways of thinking which challenge their absolutist ideology. Dare to express biological truths and you will be the victim of a mob witch-hunt. The Queer theory doctrine of gender fluidity is now taught in classrooms, lecture halls and media as absolute truth. Question it and you are guilty of blasphemy.

But Rowling – and many other feminists – as well as ordinary concerned parents are having an effect. The UK government announced this week that it was not going to go ahead with its Gender Recognition Act. Rowling’s bravery is having its rewards.

But what about the Church? While there has been some outstanding analysis – such as this piece by Carl Trueman in the Gospel Coalition, the general response has been underwhelming. Bishops who were quick to speak out strongly on Dominic Cummings have been silent about the abuse and misogyny dished out to Rowling. The Church has largely bowed the knee to the new religion of the progressive ideology or has buried its head in the sand. It’s embarrassing for us that a children’s novelist is braver and more of a prophet than many church leaders.

Some would of course argue that this does not really matter. After all, in a world where Christians are being massacred in Africa, war is being threatened between India and China, and Covid-19 is creating death and destruction, what does one author’s views about a tiny minority of the population matter? They matter because the transgender ideology is, as Rowling sees, a way to eliminate ‘woman’ as a meaningful term. The deconstruction of gender is just part of a wider deconstruction of humanity – the humanity that in the beginning God created ‘male and female’. This is not just a general philosophical or political issue, it’s’ personal for many people.

Thirty years ago, I had a transwoman in my congregation. A few years ago a teenager contacted me wanting to tell her hard and heart-breaking story of being ex-trans and the abuse she had received. You can read it here.

These issues are not just theory. More accurately they are theories/ideologies which affect how people think about themselves and others. They can do great harm.

Society seems to be having a collective meltdown – losing its grip on reality, truth and compassion. The Church seems to be joining in. Christian comments tend just to reflect those of the wider culture. There are those who seem to have a fear of trans people and express themselves in a hateful and ungodly manner. There are others who just accept every jot and tittle of the current cultural doctrines. For example, I was confidently informed by a Christian brother that “if Jesus was around now, I bet a couple of His disciples would be trans”. They too often express themselves in a hateful and ungodly manner.

The Master of Death

But enough of the analysis. What is the solution? Let’s return to Harry Potter for the answer! In The Deathly Hallows, there are three things which enable the owner to become the ‘master of death’. The invisibility cloak, the resurrection stone and the elder wand. I suspect that Rowling would be glad of the invisibility cloak just now. But I think of these in terms of Christ. The Christian is someone who is clothed in the righteousness of Christ – that doesn’t make us invisible, but it does cover all our sins. Christ himself is the resurrection stone – the one who guarantees us eternal life. The elder wand is better than all the other ‘magical powers’ – Christ is above all the powers. And of course, Christ is the one who has defeated death – he is the master of death.

Harry Potter is a fantasy but J K Rowling is living a real nightmare. We know that only Christ is the reality that can save us all and it’s time the Church took a stand for that truth, instead of leaving it to children’s book authors to take pitifully lonely stands.