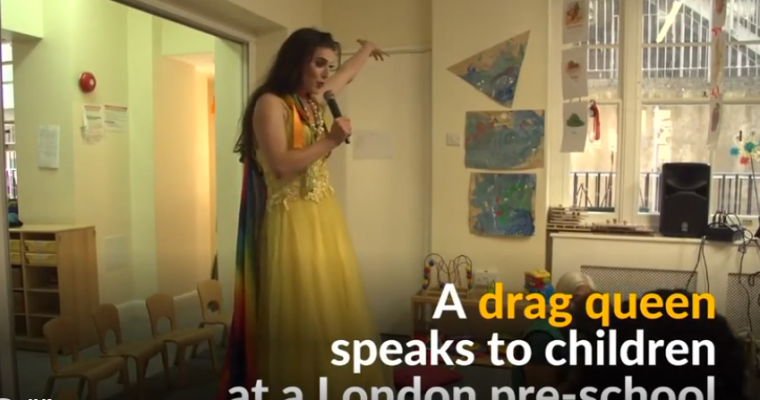 It seems as if yet another social contagion is sweeping the Western world. The way this normally happens is someone in the US starts something that is considered wonderfully Woke and administrators, corporations, politicians and educators all jump on the bandwagon in order to let everyone know that they too can see how wonderful the emperor’s new clothes are.

This appears to be the case with the current fashion for draq queen storytime in libraries, nurseries and schools – where this is seen as a good way to promote LGBT inclusivity/indoctrination. This fad started in San Francisco in 2015 when Queer activist and auther, Michelle Tea, wanted to counter what she considered ‘heternormativity’ in children’s story time readings in public spaces.

Her solution? Invite drag queens in to do the readings – and encourage them to promote the ideology of gender fluidity. Like a virus, this has now spread throughout the Western world – from San Francisco to Sydney, Baltimore to Brisbane, Philadelphia to Paisley.

It is this latter city that has seen a wee stir of rebellion against the trend. The MP Mhairi Black invited an X-rated drag queen, called Flowjob, to read a story to primary one children and speak about LGBT history month. It has caused outrage, with one parent speaking for many others: “I’m happy my child is learning about lgbt but it’s overtaking the school now. Something every week. I’m not opposed to learning about lgbt, but my 7 year old doesn’t need to know what a drag queen is and certainly not the one they had in. The headteacher is more concerned about furthering her career than tackling issuing [sic ]that our school has.”

Mhairi Black doubled down, claiming that those who objected were showing their homophobia and implying that to object to a drag queen performing in front of children is to oppress LGBT people, encourage suicides and discourage them from being who they are. But it is not just parents. Other politicians such as the Labour MSP Jenny Marra were strong in their condemnation. She tweeted: “Why are primary schools promoting sexualised content at all? Extremely worrying this happened and has been endorsed by an MP. What about children’s innocence?” Because of the fuss, Renfrewshire Council apologised as did the Scottish education secretary, John Swinney.

Marra’s question is the most pertinent one. What about children’s innocence? This week, social media was also filled with examples of a seemingly bemused and terrified young child being put on display as a drag queen did a dance in front of her, while the adults laughed and clapped with delight. Another showed a drag queen showing a group of young children how to twerk.

Of all the standard bearers the LGBT movement might choose, it’s hard to see why drag queens are top of the list, especially when it comes to children in nurseries, libraries and schools. Do they really think that the highly sexualized drag queens are their best representatives?

The drag queen Kitty Demure puts the question rather well: “What in the hell has a drag queen ever done to make you have so much respect for them and admire them so much?  Other than put on make up and jump on the floor, and writhe around and do sexual things on stage? I have absolutely no idea why would want that to influence your child. Would you want a stripper or a porn star to influence your child? It makes no sense at all. A drag queen performs in a night club for adults. There is a lot of filth that goes on, a lot of sexual stuff that goes on.  And back stage, there is a lot of nudity, sex and drugs. So I don’t think that this is an avenue you would want your child to explore.”

The Paisley primary school in question has a rainbow club. It was apparently this club (not the headteacher or staff?) which wanted to invite a drag queen to show how LGBT people live their lives. Other schools have ‘pupil run’ LGBT committees whose job is to ensure that staff and pupils do not deviate from the new sexual doctrines.

Corporations, universities, media watchdogs all have the same brief. Questioning is not permitted. Any deviation from the new fundamentalism is seen as heresy and in the name of ‘tolerance’ is shut down. The result is that we are ending up with a dumbed down, intolerant and damaged society where children in schools are now being subjected to what amounts to grooming, sexualisation and the promotion of a harmful lifestyle.

The ’emperor’s new clothes’ aspect of this agenda has gripped the elites to the extent that they are so scared of being accused of homophobia by the Mhairi Blacks of this world that they will even defend the drag queen fad – or remain silent in the face of such abuse.

Think about it. If any other adult was to prance around in their underwear, teaching children how to be sexually provocative, they would be arrested. Ironically the LGBT activists who think this is promoting their cause are only proving the point of those of us who warned that this is where the current obsession with LGBT would lead.

No Christian would want to endorse bullying or fear of homosexuals, but with the new sexual philosophy we are now entering a very dark path – where the grooming of children for the sake of an ideology is becoming normative. When you move away from the Maker’s instructions we should not be surprised if things get broken.

Dear Lord, Can I Have a Word? A Letter from a Contemporary Clergyman…

PS..  After I published this I came across two other articles which are superb.

This from Spiked–   “To my mind, DQST is a sinister attempt to force an adult ideology on to children. Accusations of homophobia have been weaponised to silence critics. As Mhairi Black’s reaction to the Glencoats controversy shows, motivations must not be questioned when they come wrapped in sparkles and rainbows.”