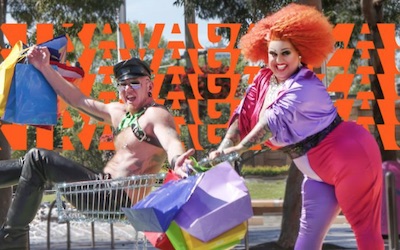 This Saturday is the big Mardi Gras festival in Sydney.   I won’t be there. Not just because I will be speaking at the Village Church weekend away – but also out of principle. I won’t be joining in the celebrations.  Not because I’m homophobic (I’m not!) nor because I think gay people should be persecuted (they shouldn’t) – but because I find the whole charade depressing and depraved.     I’m also not entirely sure what the purpose of the parade is.   If I was to go by Sydney Mardi Gras website it would not be pleasant (please note do not click on the link if you are offended by the bad language or the gross sexualisation – in parts).

I think I’ve managed to work out what Mardi Gras is but first of all let us say what it is not.

There is no diversity. If you divert from the only philosophy in any way you are accused of blasphemy and banned.  If you dare to believe and express the scientific fact that biological men cannot become women, then you are out. You dare to question any aspect of Mardi Gras and the philosophy on which it is built and you are out. There is no inclusion, no diversity and no equality. One feminist Lesbian speaker was disinvited because of her alleged ‘transphobic’ views.   I share her video here – its short but powerful..

This is no inclusion, diversity and no equality for the whole of society. Where are the parades celebrating the disabled? The immigrants? And the most persecuted group in the world just now (Christians)? 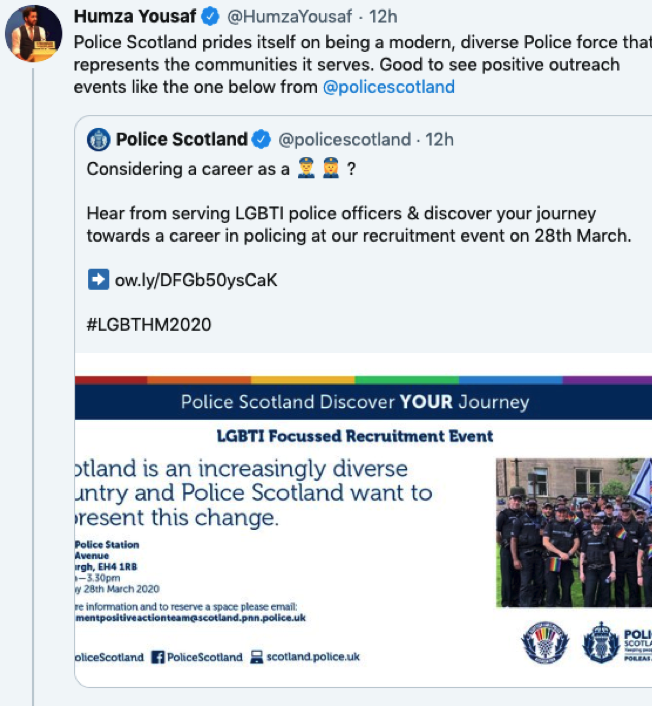 It seems that like the police or government in Scotland, if you want to prove your credentials as diverse, inclusive and equal you just have to set up an LGBT unit. I wonder why the police have not set up Christian units or drive round in cars with crosses to show ‘solidarity with the Christian community? Perhaps some groups are more equal than others?

It’s not about social justice

There was a time when a gay parade in Sydney could justifiably claim to be about social justice.  But no more.   This is where the elites come to party. The bank ANZ is a major sponsor. In fact they have set up a campaign (unasked for and unwelcome by some of the gay community) which puts them right at the top of the virtue signaling league table. Steve McAlpine has pointed out their hypocrisy clearly.

But meanwhile – whilst spending money on demonstrating their social justice credentials, ANZ agreed to compensate hundreds of Cambodian families who had been forcibly evicted from their homes and land to make way for a sugar plantation and refinery, thanks to funding from ANZ.   Nothing sums up the juxtaposition between these two versions of social justice – the one is concerned entirely with sexuality – the other looks for justice for the poor.  ANZ’s campaign is Orwellian in the extreme – although calling for ‘Love speech’ in reality it is a campaign to hate all who dare to disagree with their sexual philosophy.

It is a celebration of sexualisation 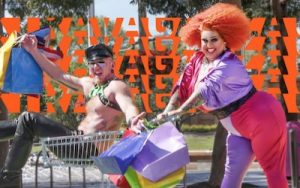 It seems as though many of the 12,000 participants like to self identify as sordid, squalid, and sexually perverse.  For some it is good, clean, harmless fun.  Others come to watch a freak show.  But yet others it is an opportunity to display perversity in public.  There are gay people who loathe the whole charade – because of both the sordid sexuality and the sordid commercialisation.  And if you wonder where all this leads – the worst thing is the sexualisation of children and the idea that this is somehow ‘family fun’.   This tweet appeared today which exemplifies the path we are heading down.

It’s a commercial goldmine and a political and sporting minefield

The corporates sponsor over 100 floats. Sydney airport has rainbow walkways. On my way to work everyday as I walk through Wynyard station I walk past businesses each trying to outdo each other in their ‘love is love’ rainbow signals. The politicians all have to express their support. The sporting organisations likewise – who cares if Rugby Australia are destroying Australian rugby – at least they are on message.   It doesn’t matter what you personally think, or even if you know what you are supporting, the only thing that matters is that you are seen to support and that you can in no way be accused of the Blasphemy against the Holy State – homophobia.

It is a victory march.

Mardi Gras is not about a fight for equal rights. This is about celebrating the victory of cultural supremacy.  Every knee must bow. Every tongue confess.  We see this everywhere, in every sphere of contemporary life.  For example Apple have just announced yet another seriesabout coming out.   And the ever Woke Disney have just announced their first LGBT cartoon character.    Meanwhile not to be outdone the Democratic Presidental candidate Pete Buttigeig helps a nine-year-old come out as gay on stage.   Mardi Gras is a conqueror’s parade – where the victors still manage to portray themselves as victims and the real victims in this cultural war, (the poor, children and the devout) are left bleeding on the margins.

Why not go and protest?

Some Christians argue that we should go and that we should be the real protestors. No. Why? What would be the point? I have nothing against the people and see no reason to antagonize or participate in something which could and probably should, be regarded as hateful. Our battle is not against flesh and blood….

My suggestion is that we should react in the following ways:

There are forces at work here that are far beyond our protest, politics or persuasion. The modern Western world is reverting to a pre-Christian Greco/Roman/Pagan society with all its decadence, inequality, cruelty, confusion and perversion. But it is precisely within that society that the Gospel flourished and turned the world upside down. Only the Holy Spirit can enable that.

Not by wearing meaningless ‘love is love’ rainbow t-shirts, but rather by simply caring for people, including our enemies, as those made in the image of God. Rather than stand with a placard along Oxford Street in Sydney this street I would personally open up the churches and invite people in for tea and prayer!

Thirdly we reason and we bear witness to the glorious changing grace of Christ.

Like for example the former Sydney gay activist David Bennett – seen here in this discussion on Unbeleiveable. A discussion which incidentally shows why the Church has been so pathetic in its response – Brandon Robertson’s response is a classic demonstration of how to use the devil’s favourite tactic – ‘did God really say?”.

We also need to think.

To understand. To know the times. To get the bigger picture.  I had the great privilege of teaching on this at a talk in Norwest Anglican church this week.  It is clearly a live topic – I expected about 50 and 160 turned up.    I think it is essential for us to get the bigger picture.  For example Roger Scruton marvelously describes the situation –

“Family law grew from the desire to protect a specifc form of domestic life, based on the lifelong union of one man and one woman.   But once the state became involved in tying the bonds between people, it also, in response to radical reformers, played an equal if not greater part in undoing them. Our laws against incest , bigamy and child marriage reflect the belief that marriage, as defined by the state, is to be judged in terms of another and higher standard. But when marriage is rewritten as a contract between the partners, in which future generations have no voice, those laws lose their underlying rationale. Hence, by a series of almost unnoticed changes, allowing ever easier divorce, and ever more blatant neglect of children, the state has overseen the gradual undoing of the marriage vow, to the point at which the advocacy of homosexual marriage seems not merely a logical consequence of all that has preceded it, but a manifest offer of ‘equal treatment’ to a previously marginalized minority”   (Roger Scruton – How to be a Conservative).

I know of noone who expresses the issues as clearly, compassionately and biblically as Rosario Butterfield.  Please take the time to read this brilliant article from her – Are We Living Out Romans 1?

Also if you have time watch this wonderful lecture which incorporates her testimony – remarkable!

I leave you with her final paragraph from the article….

Listening to the challenges of people who identify as LGBTQ (as well as the praying parents that stand behind them) can be helpful if it allows you to meet them where they are with the gospel that changes minds, wills, affections, and allegiances. Biblical counseling and faithful preaching that breaks our hearts on the Rock of Christ is crucial to this conversation, as is kindness and genuine care for the well-being of others. But Romans 1 is the true Christian’s guide as we seek to live for Christ in this post-Obergefell world. A person’s well-being is never disconnected from truth, because truth is not only true, it is better, it is beautiful, it is ethical, and it is lovely.

“I AM WHO I SAY I AM” – Reflections on Dundee Pride

After writing this I popped into my local chemist to pick up my prescription.  I could not believe what I saw on the window – lots of posters using the rainbow.  When I spoke to the chemist we had a good chat about what it was for – it was not primarily to celebrate Marid Gras but to encourage gay people to take the Prep drug in order to get rid of HIV. 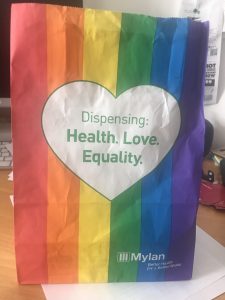 Getting rid of HIV is surely a worthy aim – and I loved his enthusiasm for that.  So I set off home with my rainbow bag.  Such of course is the cultural domination of this narrative that even to ask the questions that were in my head would seem to be blasphemy.  Without writing another essay let me just simply say – I accept that a chemist may be able to dispense ‘health’…but dispensing love and and equality?  What would happen if I went in and asked for a prescription for love?  Would I get viagra?  What about one for ‘equality’?  Of course, these words were being used in their new colonised meaning – not in the way that they are usually understood.  The whole message was code for supporting this one community and this one lifestyle drug.  There is no equality there – because other lifestyle drugs are not freely available (Prep costs $10,000 per person per year.

And it is a lifestyle drug – it is mostly for gay men who have unprotected sex or drug users who inject.  I could not find out what the costs have been to the Australian health service – but assuming that 1% of the population are gay men it must be beyond $2.5 billion per year.   That’s money that obviously cannot be spent on anything else.  Maybe it’s a good thing – and maybe it’s justified (and I am prepared to accept that it could be –  once I see the evidence – I’ve already begun to make enquiries) but what if there are those who are being denied vital medicines because the government cannot afford them?  Is that equality?  Or are a couple of lifestyles being privileged beyond all others?  And is anyone allowed to even ask these questions?