After Perth Pride we have now had the Dundee version.  By all accounts Dundee Pride on Saturday was a great success – thousands of people from all over Scotland (according to the organisers 8,000) took part at some point.   It was well attended and well-funded – Sponsors included Lush, Tay FM, Explore Dundee, the Bank of Scotland,  Dundee University, Dundee City Council, Unison, Clarks Bakery, the Police, and of course the various LGBT charities and government sponsored groups.

I happened to be cycling through Dundee City Centre at the height of the event (lunchtime) and can certainly affirm that the city square was packed.  It was colourful, loud and lots of people seemed to be enjoying themselves.  Even the Church got involved – as this clip shows. –

So everyone is rejoicing.  Everyone thinks its great.  And anyone who disagrees is clearly a bigoted homophobe on the wrong side of history who needs to get with the flow…and if they refuse should be subjected to at least the obligatory 15 minutes hate speech, and a programme of systematic re-education.

Thinking and Saying the Unthinkable

In Orwell’s 1984 we are warned about Crimethink and Crimestop.   Crimethink is to think thoughts which go against the ideology of the State or society (in 1984 the State IS society).   Crimestop is the ability to rid yourself of such thoughtcrime immediately.  You must not think this.

Orwell’s 1984 came to mind as I sat in the centre of the city, observing what was going on.  Because my reaction was precisely the opposite of what the media, the police and the academy told me I should be feeling.  Instead of Pride and Joy, I felt a deep sense of sorrow and depression.  Why?

It’s really quite hard to articulate this because as we move towards an increasing Orwellian society where even to think something that goes against the Zeitgeist is considered unthinkable, to try and speak on such issues is almost impossible.  You are automatically accused and demonised.  People are ‘hurt’ and moralists horrified that someone can be so blind as not to see the good that has happened.

So why was I saddened?  Let me make a few observations…

1.The Corporate Groupthink – I am aware that there are some gay activists who are more than a little uncomfortable at the way that they have become the mainstream and the cause celebre of the corporate capitalists.    Sure – its good for the funding and for getting the message across – but what if something has been lost?   Companies seem to be falling over themselves to offer money and show how ‘with it’ they are.   The Pink Pound is powerful. And corrupting.

2. The Attendance – I know the propaganda – but in reality the attendance was not that great.  Given the level of publicity; political, academic and corporate support and the fact that people came from all over Scotland (plus it was held in a busy centre on a Saturday)…I thought the attendance would have been larger.  The truth is that the vast majority of local Dundonians just got on with their lives.

3.  The Message  – What was wrong with the message?  Was it not all about love, tolerance and diversity?  Surely the Anglican clergyman in the clip above summed it up well?- all are welcome – no matter what their sexuality.  When the message is expressed in that way  it of course impossible to disagree – at least not without confirming the horrible homophone meme! 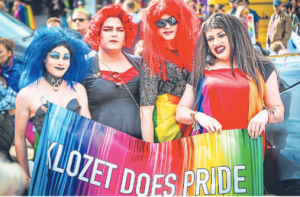 To be honest the promotion of homosexuality was not the problem – it was only an excuse or perhaps a symptom.  The problem is much wider than that.  My problem is the view of humanity which was on display.  It was both fanciful and harmful.  Fanciful because it’s not reality.  And harmful because of the message it puts across.  Sexuality is not our identity.  We don’t have the right to have sex with whoever we want whenever we want.  Sex is not an appetite to be indulged but something sacred to be honoured.  Lust is not love.  It caused me to weep seeing young children being led round in this Vanity Fair where someone dressed as a dominatrix flaunted herself.  Despite the message of joy and love  and a superficial enjoyment – I saw a lot of lonely sad-looking people who seemed to be desperately searching for an identity.

Perhaps this was most summed up in the Amnesty International LGBT group waving placards which said “I am who I say I am”.  That’s one of the biggest and most harmful lies being sold to our children and young people.  “I believe I can fly, I believe I can touch the sky” is fine as a Disney song, but dangerous as a mantra for life (especially when you act upon your belief and jump off a 20 storey building).   It is only God who can say “I am who I am”.  Yahweh is the only eternal self-existent and totally independent being.  Human beings are made in his image, but we are limited, interconnected, dependent and do not have an absolute principle of self-determination.  Worse than that we are trapped in our fallen human nature – all of us.  Telling us to indulge that nature is like trying to put out a fire by throwing petrol on it.   Telling our children that they can be whoever they want to be, that they should indulge whatever feelings they have, is deceitful and cruel.  ‘m sorry to be rebellious – but I just don’t buy into this message.

Of course all of this is part of the greater human rebellion against God.  Some people see significance in the fact that the LGBT cultural misappropriation of the rainbow only has six colours (as opposed to the seven).  Six is the number of man (666) but 7 the number of perfection, the number of God.  Whatever the truth of that its a good point.  There were good things in the Pride parade, but because of what was missing it was ultimately poisonous.

Dundee does not need the message of Pride.  That only leads to a fall.  We need humility.  We need a recognition that we are broken people in the midst of a society that is largely broken.  We need repentance and renewal and reformation.

So how should the Church react?  We could be like the Anglican clergyman, utter meaningless truisms parroting the culture and proudly proclaim that God affirms people in their sin (is it any wonder that most of the Church in this city is in such rapid decline?).  We could be like the angry demonstrator returning Pride with pride by shouting louder.   We could just bury our head in the sand, keep quiet and just hope it all goes away. Or we can be like Jesus and weep over our city  “As he approached Dundee and saw the city he wept over it, and said, ‘if you, even you, had only known on this day what would bring you peace – but now it is hidden from your eyes” (Luke 19:41-42).   “Streams of tears flow from my eyes, for your law is not obeyed” (Psalm 119:136).

Instead of going along with the Darkness, or just shouting at it,  why don’t we bring light?

As it happens next Saturday there will be another event in Dundee City centre.  CreationFest is coming to town.  The cities evangelical churches are getting together and from 12 to 8 are holding an open air event with the aim of bearing witness to Jesus Christ.  This is not an anti-Pride festival…but it is pro Christ – ultimately it is the light of Christ not Pride (of any sort)  that will bring healing to our cities and nations.

Wouldn’t it be great if Christians from all over the UK (and elsewhere) came to Dundee to celebrate Christ this Saturday?   Imagine if there were 8,000 Christians here – without the media publicity and the corporate sponsorship? (Maybe I should ask Dundee Uni and Dundee City Council if they will sponsor us? After all they are all for diversity and equality!). Why not come and visit the new V and A and then join us in the city centre.  If you are not able to come then please pray for this witness – I would certainly value prayer – I will be doing a seminar and some open air preaching.  I also have the great privilege of finishing the day in the Steeple Church at 8pm with a message entitled ‘Hope for Dundee’.  May the Lord grant tears of repentance and joy!