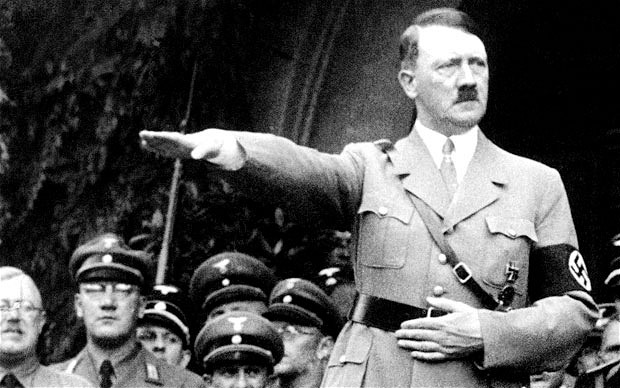 It is astonishing how many times Hitler comes up in conversation. It’s not just that people have a seemingly endless fascination with him; it’s the way that the new fundamentalist atheists have adopted ‘Hitler was a Christian’ as one of their mantras. So how do we answer this one? Certainly not just by saying, “No he wasn’t, he was an atheist.” Nor is it helpful to shrug one’s shoulders and walk away from the discussion, as though it did not matter. Because if Hitler was inspired by Christianity to do what he did, there is a serious charge to answer.

(This clip below is Matt Dillahunty attempting and failing to blame Christianity for Hitler!)

If you are asking whether Hitler was a follower of Jesus Christ, the answer is absolutely no. If you mean, was he baptised as a Catholic and did he sometimes make positive references to Christianity in his public speeches, and did he try to get the Churches on his side, then yes. But he was not a Christian in any meaningful sense of the word. He did not read the Bible, go to church, or follow Jesus. He hated God’s chosen people, the Jews. It is difficult to see how someone who hated the Jews could follow the greatest Jew of all.

As his ideologue Martin Bormann put it:

He condemns “the concepts of Christianity, which in their essential points have been taken over from Jewry”.

But the fact that Hitler was not a Christian does not answer our question. Why did God make Hitler? The question itself is a bit strange – because God does not make people out of a mould, and programme them to do all the good or evil they do. In addition we should be enormously thankful that Hitler and the Nazis were ultimately defeated. Is it not a bit inconsistent for people to blame God for Hitler but not to thank him for Hitler’s defeat?

If the questioner is suggesting that God should not permit anyone to be born who would do evil – then would that not eradicate most if not all of us? We are really back to the age-old question of suffering – except this time on a massive scale. The most we can say is that God let the German people and the European nations go their own way. They decided to reject God and Christianity and become a ‘modern’ ‘advanced’ nation. As a result they ended up with Hitler. And remember that Hitler was just one individual, a figurehead for an evil that was to do with far more than he.

The question I asked when I was a teenager (and I read loads of books about Hitler, Weimar Germany and the Nazis – I even went to the University of Edinburgh to study that subject), was how could this happen? How could the most advanced, sophisticated and cultured nation in the world end up being led by someone like Hitler?

The answer for me was frightening – there is a heart of darkness within every human being – including me. And yet out of the evil came hope. Auschwitz was for me one of the reasons I became a Christian. It proves the Bible’s teaching if human beings are left to our own devices we will make a mess and a hell of things. As Freddy Mercury, late of Queen, sang at the first Live Aid, “If there’s a God up above, a God of love, then what must he think, of the mess that we’ve made, of the world that he created?”

A couple of years ago I stood at the gates of Auschwitz in tears. It was not just the industrial scale of man’s inhumanity to man, but also the answer to how to deal with that, which overwhelmed me. Ultimately the atheist worldview has no answer to the problem of evil, as exemplified in the Holocaust. But Christianity does. And that answer is Christ. His life, love, teaching, death and atonement. If Hitler and the German people had followed Christ, there would have been no holocaust. The fact that they did not do so is not God’s fault. As our text says – we are responsible for our own sin.

CONSIDER: Why do you think Hitler and the Nazis were able to gain power? Why was there such a hatred of the Jews? What do you think will happen to humanity if God just leaves us to get on with things?

Was Hitler a Christian?

Was Hitler really a Christian?

A.S.K 28 – Does Your Religion Depend On Where You Were Born?

You can still order A.S.K in time for Christmas!

amazon UK, US or Australia