I have to confess that my mind, as well as my Twitter feed, has been filled with thoughts of the General Election this week.  Why bother?  After all some of my Cybernat friends in that warm internationalist way they espouse, have suggested in somewhat colourful terms that now I am a foreigner I should not bother with Scotland!  The reason is that  I care about my country and was distressed both at the low standard of debate in the campaign and the poor quality of choice available.  It was so bad that for the first time in my life I did not vote in a General Election…The General Election – Final Week

But that was not because of apathy – almost precisely the opposite.  I went to bed on Thursday evening dreading either a hung parliament or a Corbyn government – and was mightly thankful to wake up to the news that that was not to be the case (which is not say that I am jumping for joy at the prospect of a Johnson government).  One of the advantages of being here was that I was able to watch the whole election as the results came through in the day.   It was certainly a surprise.  One lesson I have learned is how out of touch Twitter is – the impression from ‘the experts’ on Twitter was that Corbyn and co were on the cusp of a great moment….’it’s happening’ was his tweet – thinking that the queues for polling stations were a sign that the Momentum was with him.  It was thankfully not to be.

Today I ‘happened’ to be on the rota to preach the final sermon in a series that St Thomas’s have been doing on Esther. I preached on Esther 9 and 10 about the joy of the Jewish people being delivered from an evil government which sought to destroy them. It seemed apposite! 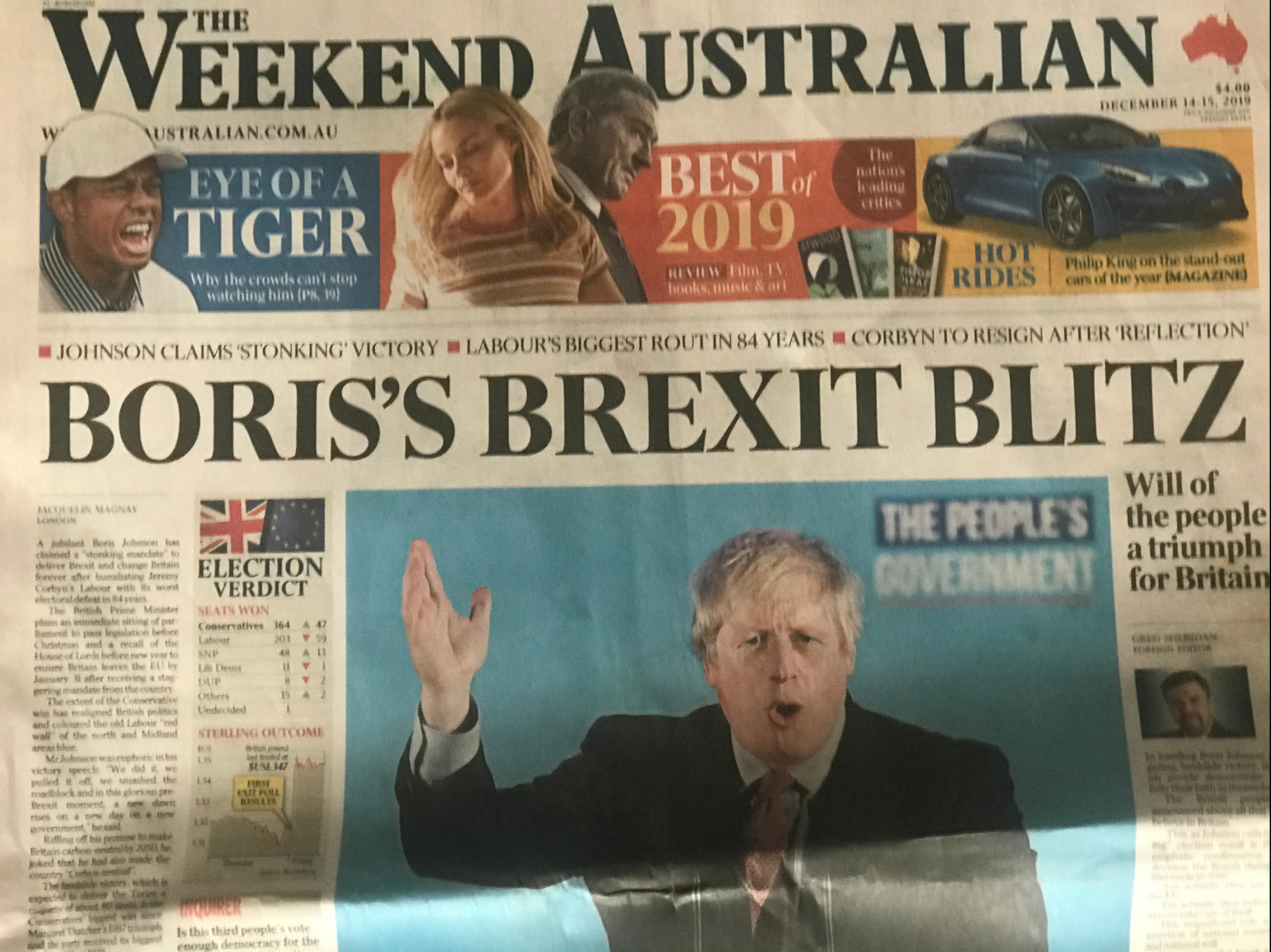 The media reaction here is interesting.  The likes of The Australian and The Telegraph see it as a vindication for conservative politics and a great opportunity for Australia.  They want a trade deal pronto!  On the other hand The Sydney Morning Herald could hardly contain its disappointment, and desperately sought to find a negative aspect to knock the result.  So the Progressives like Peter Fitzsimmons, thank their lucky stars for Nicola Sturgeon.  She tells them what they want to hear, and confirms their doom laden, miserable bias.  Fitzsimmons, with as much knowledge of UK politics as he has of Christian theology, pontificates in todays Herald that there will be a second referendum as the Scots head back to Europe!   For the reasons I explained in this article below – the fact is that the election has made Scottish Indy less, not more likely.

I was asked to write a follow up piece to an earlier article I had in Eternity magazine.

I attach the article at the end of this letter….You can get the original here.

I pray that the Lord will have mercy upon the UK, and especially upon my poor Scotland which I believe is about to enter a period of darkness which at least will have the advantage of making the light shine all the more brightly!

PS.  Before the article. I read this in the BCP this morning – it seems to me a suitable prayer for the Prime Minister.  Would that it would be true of him!  I hope that all Christians, whatever our political views, would pray this…

“O God, who provides for your people by your power, and rules over them in love; vouchsafe so to bless your Servant our Prime Minister, that under him this nation may be wisely governed, and your Church may serve you in all godly quietness; and grant that he being devoted to you with his whole heart, and persevering in good works unto the end, may, by your guidance, come to your everlasting kingdom; through Jesus Christ your Son our Lord, who lives and reigns with you and the Holy Spirt, ever one God, world without end. Amen” What does the UK Election mean?

Boris is back, Brexit bumps along … and beyond

The UK General Election is over. The results are in and, as promised, here is a wee summary of what the results mean.

For those who missed it – in a surprise outcome, Boris Johnson was returned as Conservative Prime Minister of the UK with a large majority of 78.

Johnson’s Brexit deal, already agreed with the EU, will now be passed and the UK will formally leave the EU at the end of January. It is an historic moment, but what kind of Brexit it will end up being is very much up in the air.

It could be what is termed Brexit In Name Only, (BINO) or a ‘no deal’ Brexit. I suspect it will be something in between.

As a politically charged Scotsman working in Australia with ministry movement Third Space, the Scottish part of the election was always going to grab me. And the Scottish Nationalists did really well. The increased their seats by 13 to 48. So, surely, Scotland taking such a divergent path from the rest of the UK increases the likelihood of a breakaway? Although the London and Manchester based media delight in making such an analysis, it is a superficial and false one.

Scottish Independence is now less likely because of the following reasons:

b) Boris Johnson will not give a ‘section 30’ order. That is a legal requirement from the UK government to grant another Independence referendum. He will refuse to do so, as the last independence referendum in 2014 was supposed to settle things for a generation. Scotland’s First Minister, Nicola Sturgeon, has already said she will abide by the law and not hold a referendum without it.

c) About 46% of Scots voted for Independence parties, 54% for the others. Support for Scottish Independence would need to be far higher if a referendum was to be won.

d) Scotland will be out of the EU if and when another Independence referendum come -s and will have to apply for membership as a new country if the vote was won. This makes independence even more of an economic risk: out of the UK would result in economic hardship; being out of the EU as well would make it worse.

For all these reasons the Nationalist government will huff and puff, march and petition, plead and shout, but it will all be to no avail – except to feed the sense of grievance and ensure the SNP keep its electoral stranglehold on Scotland (until the penny drops for the Scottish people).

3. A United Ireland is more likely

Although Scotland is less likely to break away; there could well be serious constitutional change as a result of this election. It is now more likely that Northern Ireland will become part of a United Ireland, because:

a) For the first time, there are more nationalist and non-unionist MPs than Unionists from Northern Ireland.

b) It is highly likely that any Brexit deal will now include different arrangements for Northern Ireland in order to prevent a ‘hard’ border in Northern Ireland. Now that the Conservative government, with its healthy majority, is not longer dependent on the Democratic Unionists (who lost two MPs), they no longer need to fear their reactions.

c) Above all, it’s the sheer demographics. Despite the rise of the Alliance Party, politics in Northern Ireland is still essentially tribal. The Catholic population is growing while the Unionist is declining (that was a major factor in their parliamentary leader Nigel Dodds losing his Belfast seat, an area subject to a changing demographic).

4. Politics in the UK could be changed forever

There is something going on throughout the Western World.

The old politics of Right and Left is being replaced by a new politics which seems to have a different axis – the progressive/traditional divide? The haves and the have not’s?

Whatever it is, it is as much classed based as the old politics – only this time it is the wealthy and the ‘educated’ middle classes who are far more likely to vote for the ‘Left’ (witness the number of rich and famous celebrities who, in the last days of the election, made heartfelt pleas for the plebs to vote for their man).

The working class and the poor are more likely to vote for the traditional Conservative parties. This was seen in the UK election where the Northern and Midlands “wall” was well breached by the Tories.

Seats which had never voted Conservative moved from the red to the blue.

It remains to be seen whether this is anything more than a temporary phenomena – but it does appear to be part of a wider pattern.

Where to from here?

In the immediate wake of the UK election, I’m struck by how these are confusing times. While we may be able to see something of the social and political patterns emerging, we do not know what will happen.

Just as there are storms and fires in the natural world, so there is “climate change” in the political world.

For the non-Christian who sees what is going on, it must be a nightmare.

The Christian at least has the consolation of knowing that ultimately all our times are in His hands.