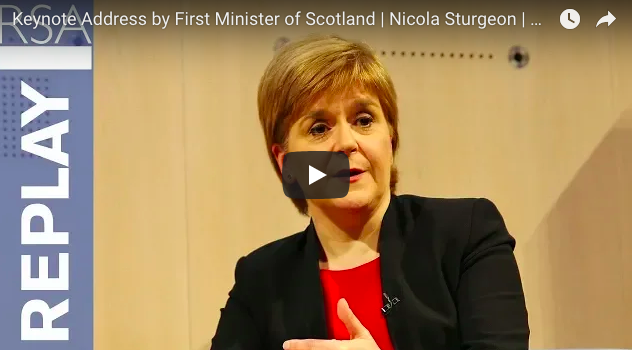 Something momentous happened last week at the SNP conference…something that went largely unreported and unnoticed except from a brave few. Something which greatly saddens me.   As predicted on this blog two years ago the SNP have given up on Independence.  The dream is over.  Or rather the dream remains only as a dream.  It’s useful to motivate the troops but to all intents and purposes the hierarchy of the SNP have now given up on any hope of that dream becoming reality.

Why is this the case?

By supporting a second Brexit referendum the SNP have guaranteed that any future Scottish independence referendum will be followed by yet another.  In the unlikely scenario that a referendum was granted by the UK government ( something which is currently required by law) and the even more unlikely event it was won by Yes, the UK government could then argue that people did not really know what they were voting for, that they should get a second chance to vote on the ‘deal’ – and they would of course ensure that the terms offered were the worst possible.  In other words they would behave just as the EU have just now.  And Nicola has just handed that to them on a plate.

Unionists can rejoice. If they lose the next independence referendum, they can quote the Nicola Sturgeon doctrine on Brexit: if you don’t like the first result – vote again and get a chance to reverse the decision. Never has such a foolish leadership decision been so easily and recklessly accepted by the SNP membership. Never has the pass been so cheaply sold.

Brian Wilson in the Scotsman argues that it is ‘all one big, ongoing publicity stunt”

Ms Sturgeon has acknowledged out of necessity what has long been apparent – there is no appetite for a second referendum, no conceivable justification for it in the midst of negotiations that will affect every aspect of Scottish life, as much as the rest of the UK, and no prospect of any Prime Minister in his or her right mind agreeing to it. So it has all been one big, ongoing publicity stunt. That begs a question, which is largely for Scotland’s broacasters to answer. If the same nonsense kicks off again, manoeuvring for the now officially distant objective of a second referendum, while Scotland’s interests in the Brexit negotiations and much else play second fiddle, will Ms Sturgeon be treated with the same deference?

I think that Nicola knows this – as do many in the SNP hierarchy – but they would never say it, because the dream of independence is what motivates their troops and keeps them in power.   Some are beginning to get a bit suspicious but in general the party faithful (in what is now a highly controlled and efficient party) continue to lap it up and go along with the group think.  Thats why even when she told them that in effect there would not be IndyRef2 for another few years (‘when Brexit is sorted’ is code for that), there was hardly a murmer.  Despite all the marches, social media hysteria and constant up beat reports about the opinion polls (which are largely static despite the Brexit chaos), Nicola knows that the numbers are not there to win IndyRef2….I’m not even sure her heart is in it…she seems more set on saving the EU).

Indy in the EU?

But there is a second reason that Nicola has done this – she has replaced the vision of Scottish being an independent sovereign country able to make its own laws and be governed by its own people, with the oxymoronic fantasy of ‘independence in the EU’.

Now as a fully paid up member of the UK Establishment (which is overwhelmingly Remain), she is a useful tool to be wheeled out whenever they want a ‘progressive’ case for the EU to be made.  So yesterday she gave a speech at the RSA (Royal Society of Arts) whose members are overwhelmingly pro-EU.  The Arts Establishment is also one that is well-funded by the EU – I got an insight to that a couple of years ago when I went to represent the Free Church at the Tate gallery – The Tate, the Establishment and the Free Church

The Arts Establishment is The Establishment. The political, economic, media, educational and arts establishments are all just sub-branches of the same establishment. It is the chairmen of companies, the Principals of Universities and the graduates of Eton, Harrow, Oxford and Cambridge who are la›rgely the patrons and controllers of the arts.

As we are seeing in these days the Establishment is in a blind panic about the possibility of Britain leaving the EU and is pulling out all the stops to prevent that happening.   Frederick Forsyth reckons that 95% of the British establishment support staying in the EU – because the ‘the EU is the biggest taxpayer funded free ride in the world’. And these people are its primary recipients.  The papers make a great deal of fuss about welfare scroungers (and indeed those who are scroungers deserve the criticism), but there are establishment figures who do very well out of the largesse of the taxpayer – including in the arts world!

Anyway as you can see if you watch the FM’s speech (well delivered, articulate and pushing all the right buttons for her audience) they lapped it up..

The biggest problem with the FM’s position is her lack of understanding of what the EU actually is.  In her world, which is somewhat simplistic and fundamentalist, she has the good guys and the bad guys.   The latter are clearly Westminster (although in her new position as luvvie of the Remain classes she has even come to rely on Westminster to overturn the vote of the people) whose treatment of Scotland is appalling, bad, evil.  The former are the EU – the bastions of all that is good and pure and progressive.

But here is the really scary thing.  Our First Minister does not seem to know what the EU is or how it operates.  She believes as she stated that it is possible to be an ‘independent’ country within the EU because the EU is a collaboration of sovereign national nations, who each retain their sovereignty whilst co-operating together.  I don’t really blame her for this as it is a collective delusion which most of the Remain classes seem to share.  But it is as nonsensical as arguing for a square circle or, perhaps more pertinent, that it is  possible for Scotland to be an independent country within the UK union.     The trouble is that the EU is not a collection of national states working together.  It was designed to be a supranational body where individual states agree to subjugate themselves to the laws of the superior body.  Over the years the EU has developed from being a trading block to being this supranational body – it has never ceded power to individual countries but has instead increasingly taken away that power.  The move is towards a United States of Europe and there is no sign that that move will end and sovereignty be restored to sovereign nations.  That may or may not be a good thing – but please lets not pretend that you can be independent (make your own laws, be governed by your own politicians) and be in the EU.

So why is Nicola going along with this?  Perhaps she genuinely does believe in the EU fantasy…but there is also a degree of self-interest.   She believes that the EU will benefit her government (often spoken of as ‘Scotland’) or what I call ‘civic Scotland’.  And indeed it will and does – the EU’s method of ruling is to get local/national institutions to do the governing on their behalf.   A role which the Scottish Government, is quite prepared to do.   Nicola’s view on the EU means that Scottish Independence really means that Scotland will become a region of the EU – with substantive devolved powers, but we will not be an independent country with the ability to make all of our own laws, control our own economy or have our own currency.

The dream of independence is over.  Long live the dream!

The Scottish Referendum – Four Years On