“Of making many books there is no end” says the Good Book (Ecclesiastes 12:12). But from my perspective one can never have too many books – which is why this Christmas I will look forward to friends and family reducing my Amazon wish list!

Christmas is a book time of year. That is also true for quality newspapers and magazines which often have lists of their books of the year. In that spirit, I would like to mention my own favourite books of the year.

Douglas Murray’s The Madness of Crowds is an outstanding and prophetic book (from a gay atheist!).  A N Wilson’s Hitler is the biography of the year and also has a prophetic quality about it. 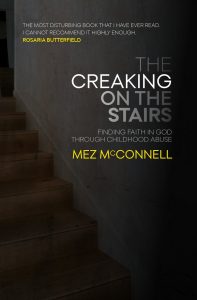 My favourite Christian book is Mez McConnell’s The Creaking on the Stairs. This is not an enjoyable read, but it is an essential one. Whilst it does not have the literary quality of Murray or Wilson, it is well written, with short, readable, fascinating and challenging chapters. Mez’s book is an important book for the Christian church and one that is a powerful testimony to the transforming power of the Gospel.

Rosaria Butterfield calls it “the most disturbing book that I have ever read. I cannot recommend it highly enough”. She is right. It is a profoundly disturbing book as is suggested by the subtitle “Finding faith in God through childhood abuse”. It is not an autobiography – Mez told his story in Is There Anybody Out There? A Journey From Despair To Hope (Christian Focus Publications).

It is not a ‘how to’ book. It is not trite and simplistic. And it is not ‘fly on the wall’ poverty p0rn. It is painfully realistic and sadly really needed. The kind of child abuse that Mez endured – with the subsequent drug abuse, violence, and crime – is horrific and far more common than we might realize.

To be honest, the damage that it causes to a life would suggest that that life is really beyond redemption. How can what is so fundamentally broken be healed? Can the dead be raised? Can these bones live? Would someone who has undergone such cruelty and torment not be in therapy for the rest of their lives? Is it not just a case of damage limitation?

This is where the Gospel comes in. Mez, in sometimes graphic and disturbing detail (and through what he does not say) explains the pain and hurt of being abused and tortured by your own mother. He talks about what child abuse is, the silence of God, the lack of self worth, the failed attempts at dealing with the situation … and much more.

Becoming a Christian was not the end of Mez’s ‘issues’ and in some instances just created more. And that’s what I love about The Creaking On The Stairs. It’s not a pagan rags to Christian riches story. It’s real, raw and radical. I suspect that there will be as many people shocked by the Bible teaching that Mez wrestles with, as there will be those shocked by the abuse he suffered. With chapters like ‘The glorious, wonderful reality of Hell’ and ‘The terrible reality of Heaven’, there is no chance of this book being perceived as comfortable.

Key biblical concepts like love, justice, forgiveness, grace and God’s sovereignty are taught and applied to the most bitter of experiences. They work! In fact it is precisely because of these teachings that there is hope for the poor.

There is a great deal of talk, largely from middle class churches, about helping the poor. But talk is cheap. Grace is not. The Gospel is so radical that it reaches parts and people that other philosophies, programmes and politics cannot. If you doubt that, read Mez’s book.

I found the helpful resources at the end, well, helpful. The interviews with the child abuser and the pastor of a child abuser were revealing, as were the FAQs and responses from those who have suffered being abused as children.

The Creaking on the Stairs is one of those books that having read on Kindle I immediately went out and purchased a hard copy to keep on my desk. Because one day soon I will come across someone who needs it and will be greatly benefited by it. It is absolutely my Christian book of the year.

McConnell writes: “This book has been over 20 years in the writing. It has been incredibly painful as I have trawled the dusty corridors of childhood memories. Memories I thought I had long since locked away in secret vaults came out into the light as I began to tell my story. Of course, my story is still being written. Only the Lord knows the ending. But I have a feeling that He isn’t done with me yet. I still have a lot of growing to do. But, thanks to Jesus, I see this world with new eyes. I see it through the lens of His pain and sacrifice, not my own. I’m not a victim anymore.”

The Three Presbyterians – the Free Church and Twenty Schemes.