What is going on in British Politics? In an election which was supposed to be all about Brexit, and which Labour want to make all about the NHS, there is another issue that is just as predominant – that of antisemitism.

The Chief Rabbi Ephraim Mirvis, in a column in The Times last week, made an unprecented attack upon Labour because of its failure to address antisemitism. He stated that the “overwhelming majority of British Jews are gripped by anxiety” at the prospect of a Corbyn-led government.

Given that there are only 300,000 Jews in Britain, why is this considered such an important issue? It’s complex, but I think the reasons are good.

I was once at a meeting with the Israeli ambassador, Mark Regev, in Edinburgh Theological Seminary. It was enlightening. The previous night he had been in Glasgow speaking at a university there – he was picketed by people chanting ‘from the Jordan to the sea, Palestine shall be free’. This was a less than subtle reference to the wiping out of the State of Israel.

A couple of years ago at Celtic Park, where Celtic were playing an Israeli team, hundreds of people waved large Palestinian flags and sang “we are Scottish, we are singing for Palestine and we won’t be denied”. Whilst there were those who argued that this was just people standing up for an oppressed people one has to simply ask: where were the anti-Chinese flags for oppressing the people of Tibet, or anti-Saudi flags for oppressing the people of Yemen, or anti-Burmese flags for oppressing the Rohingya Muslims? Or for countless other situations far worse. The fact is that being anti-Israel has become a cause celebre for the British Left and such faux concern for oppression provides a real cover for antisemitism.

I spoke to a leading representative of the Scottish Jewish community and asked him if my impression that antisemitism was on the rise in the UK and even in Scotland (I say even because as far as I know, Scotland is the only country in Europe that has never had anti-Jewish laws and, because of our Christianity, we always felt an affinity with the people of Israel). He answered unequivocally: yes.

I also know a homosexual activist who said that he was thinking of leaving the UK, not because of homophobia, but because of antisemitism.

What is causing this increase in antisemitism?

Firstly there is the traditional European antisemitism. This is something that runs very deep. I have come across it in various forms, not least in one lady who told me that “if” the Holocaust happened, the Jews probably deserved it. I have been astounded at how ingrained antisemitism seems to be in many of our European cultures. Another man I know – nice, middle class, left-wing and liberal – told me that the Jews were responsible for the evils of capitalism.

There really is no way around this. The primary cause of the increase in antisemitism in the UK is because of the increase of Islam. When the film Schindler’s List came out in 1993, I asked a Muslim friend if she wanted to come and see it with me at the local Odeon. She flat out refused because she said that the Holocaust probably did not happen – it was Jewish propaganda. I was astonished because she was as liberal a Muslim as I have ever met.

It began to make sense to me that Mein Kampf became a best a bestseller in Turkey in the first decade of this century. It also made sense to me that several Christians I know who work with Muslims seem very quick to adopt the anti-Israel zeitgeist (although they would deny it was antisemitic). They are often the ones who engage in the game of ‘what abouterry?’ Every time you mention antisemitism, they ask: but what about Gaza or the West Bank? As though somehow this was a justification.

This has led onto another major cause. Traditional ingrained antisemitism, combined with Islamic antisemitism has now been joined by the new kid on the block – left wing antisemitism. This is seen in the radical Left, and especially in the extreme Left of the Labour party. Corbyn says he opposes antisemitism, but he supports those who are clearly antisemitic – Hamas, Hezbollah and some of the more radical Islamic groups. Despite the denials, Corbyn’s refusal in his interview with Andrew Neil to apologise for antisemitism within the party was telling.

Recall the antisemitic banner from the 2017 election.  If you don’t know what I’m talking about, click here to view it. 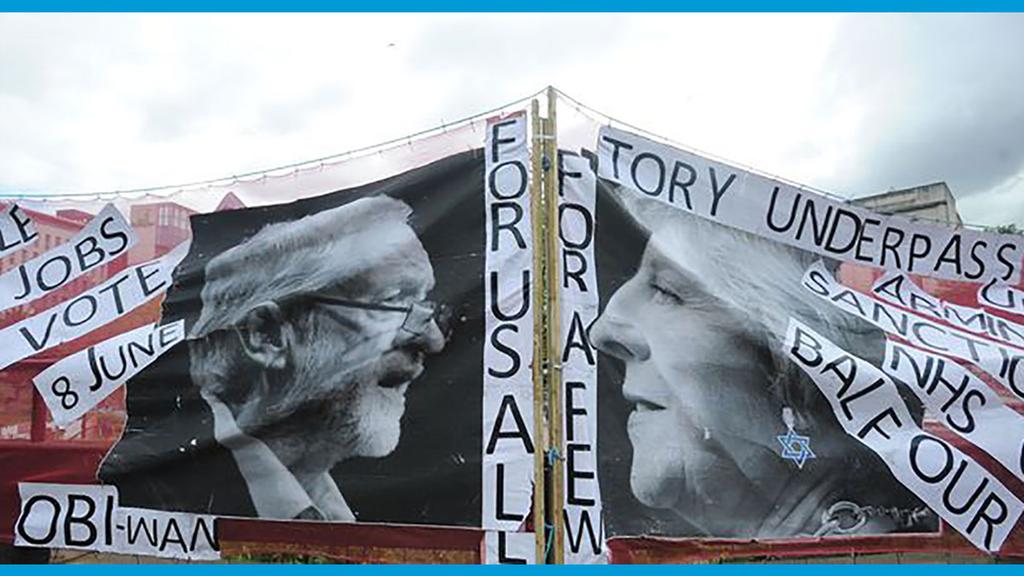 Notice what May is ‘wearing’ – two Star of David earrings and note the word ‘Balfour’. This is a reference to the Balfour Declaration of 1917 which was the basis for establishing the Israeli state today. It is a profoundly disturbing and antisemitic poster. And it is only one sign of an increasing antisemitism – not only in its traditional home, the far Right, but now on the radical Left.

Sometimes they combine. When Corbyn spoke about ‘British Zionists’ in 2013 he was enthusiastically endorsed by Nick Griffin, leader of the British National Party. David Duke, former leader of the KKK, spoke in support: “It’s a really good kind of evolutionary thing, isn’t it, when people are beginning to recognize Zionist power and ultimately the Jewish establishment power in Britain and in the western world.”

In two further developments this week, a video has emerged which shows Corbyn complaining that the BBC has a bias towards saying that Israel has the right to exist. And the historian Sir Richard Evans, who had stated that he was going to vote for Labour “not withstanding the cancer of antisemitism that has infected it”, has now announced he has changed his mind and will not be voting for Labour.

But when has a Scottish government minister ever visited Israel? How did SNP MSP Sandra White get away with posting a cartoon on Twitter showing piglets suckling a large pig with the word ‘Rothschild” written on it, and a bank with the Star of David?

Why the focus on Israel?

I am not a Christian Zionist, although I believe that the Jewish people have a right to their own homeland – especially after centuries of pogroms, persecutions and ultimately the Holocaust, in Europe. I do not think that to criticize the country of Israel is necessarily antisemitic. But I do believe that the focus on Israel above all other countries is because of antisemitism. For example, the Scottish Parliament has had 59 motions on Israel (despite the Scottish Parliament having no responsibility for foreign policy), of which 52 have been anti-Israel. Why?

The Peace of Israel?

If I were Jewish I would be deeply fearful of the possibility of Jeremy Corbyn and the Momentum-controlled Labour party being elected to power in the UK. Not just because of what may happen here but because of the signal it would give to the enemies of Israel whose desire is to see them destroyed. Can you see Corbyn lifting a finger to help Israel if they are attacked?

David Robertson is director of Third Space in Sydney

PS.   Since I wrote this I have become aware of an astonishing statistic – 85% of Muslims in the UK vote for Labour.  There are 3.5 million Muslims in the UK.  There are 300,000 Jews.  What does it matter to Labour if they lose the votes of Jews (who used to vote in similar proportions for Labour as the Muslims now do) if they get ten times that number?    What depresses me, even more, is that I don’t think that the vast majority of the electorate in the UK care.   Sure – it’s not nice to be anti-Jewish but what does it really matter – when Labour promise to end poverty in one government, give free student tuition,  and their latest gimmick 1/3 of rail fares and free fares for under 16s….?  Besides which the propaganda that is pumped out in our schools means that most young people are more aware of the ‘evils’ of Israel than they are of the Holocaust – a fading memory.  I remember a young man in Dundee, in front of his classmates, yelling at me for being amongst other things a ‘homophobe’, before going on to declare that the holocaust didn’t really happen, and if it did, it was because the Jews deserved it….

I never thought I would be writing this – but for me this election is no longer mainly about Brexit.  Its about ensuring that an anti-Semitic leader does not get into power.  A fearful judgement awaits us if that happens.   And to think that Nicola Sturgeon is prepared to countenance that, in order to further her own narrow party ends!

Who Faces the Greater Threat- Sir Alan Duncan or Israel?