The Lib Dems: Their campaign goes from bad to worse. In fact it’s so bad that there was even a report today that they were thinking of sacking Jo Swinson, before the vote! Jo 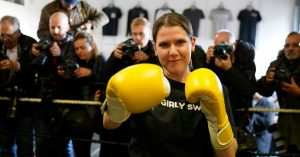 Swinson was even called a ‘feminist disaster’ because of their extremist and dumb transgender policy.  The decline to 12% in the polls look set to continue…. https://unherd.com/2019/12/jo-swinsons-feminist-credentials-are-a-joke/?tl_inbound=1&tl_groups[0]=18743&tl_period_type=3

The Conservatives – Boris Johnson’s refusal to be interviewed by Andrew Neil has not gone down well. The collapse of the Lib Dems is the worst news for them – they had relied on the Lib Dems splitting the Remain vote.  The presence of Donald Trump in the UK for a couple of days is also not viewed as a good thing for the Tories.

The SNP – Clips from Nicola Sturgeon’s disastrous interview with Andrew Neil have been doing the rounds. A report out this week shows the continued decline in Scottish education with Scottish schools being behind England in reading, maths and science. https://www.bbc.com/news/uk-scotland-50642855  And the disowned SNP candidate for Kirkcaldy, Neil Harvey, who lost the official parties support because of his anti-Semitic comments, has been successfully crowd funding from party members for his continued campaign.

The Jews – The problem is not that anti-Semitism exists. It’s that so few people care that is has been normalized. This videoof the furious reaction when the Tory candidate for West Suffolk mentions anti-Semitism is indicative of how deep the hatred is.

Even more disturbing is the video that emerged which shows Jeremy Corbyn on Iranian TV questioning Israel’s right to exist – https://twitter.com/i/status/1200232195987824641

Unborn Babies – Both Labour and the Lib Dems have committed to decriminalizing abortion – and, in effect, offering abortion on demand, up to birth. It is the most extreme abortion law proposals in Europe.

Scottish Politics – with the leaders debate….best summed up by this tweet from Kenny Borthwick… 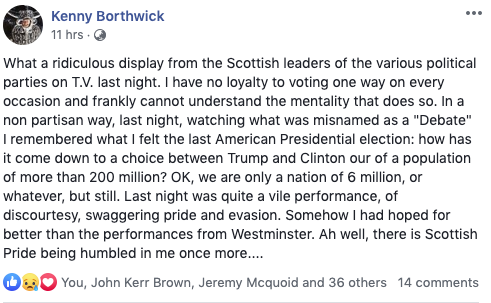 It’s Been a Good Week For..

The Labour Party – the gap between them and the Tories has narrowed slightly. A couple of polls have them within 7%. This is almost entirely because of the collapse of the Lib Dems. There are now Remainers who are so ideologically committed to the EU that they are prepared to hold their noses and vote for a PM that they know will be a disaster – but at least they get to stay in the EU – and so deep is their faith that they believe the EU could even rescue us from Corbyn.

Meanwhile Labour continue to offer populist policies that will never be fulfilled – Rail fares cut by 33% – ending poverty during the lifetime of the parliament – no student fees – free broadband for everyone etc. But the most outrageous one for me is the 58 billion

promised to the Waspi women. It’s not just that Labour can’t say where this money will come from – but the fact that the promise is itself unjust asthis article from Oliver Kamm argues.In a normal world all of this would be enough to ensure that Labour were not taken seriously – but this is not a normal world.  That is seen even more when it is the working class who are voting Tory and the middle class who are more inclined to vote Labour!

One thing that has depressed me about this election is the way that the politicians have spoken about the NHS.  They weaponise it – but do not face up to the real and serious issues – as expressed in this letter from Australia.

Finally here is an interesting article from James Mildred of CARE asking ‘Where do our party leaders stand on faith?” – The answer is not encouraging. They are basically all faithless and godless!

In terms of my own vote I will take the rest of this week to decide….it really is Hobson’s choice…..I just simply pray that the Lord would have mercy and would return this country to its Christian roots and protest his people and grant us all peace.