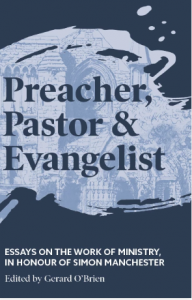 I have had the privilege of writing an essay in a ‘festschrift’ for Simon Manchester.  The other articles are well worth looking at.  I will leave you to judge about the last one – mine – which I intend to post in three parts…The first part is below.

There was no way he could do it. It was ANZAC day and the preacher was in the midst of a series on Song of Solomon. Surely he would take a break and do a one off sermon on the need for peace, or the ultimate sacrifice?   But I was wrong. He carried on in the Song and he carried it off. The Word of God was preached – faithfully, contextually and relevantly. I was stunned. But not as much as when it was Mother’s Day – and the church was filled with the nursery children and their mothers. Again the preacher had been doing a short series on Mark 13 – his passage that day was to include v.17 17 How dreadful it will be in those days for pregnant women and nursing mothers! There was surely no way he could preach on that passage on Mothers Day?! He did and it was the same as in the first example – the Word of God was applied to these 21st Century people as though it was a direct revelation from the Lord for us today. Because it is.

That preacher was Simon Manchester. I have only known him a short time, but in that short time he has been a tremendous influence on me. So when I was asked to write for this Festschrift, I was delighted to take up the challenge. This article is not an academic piece, or a detailed analysis of the minister/vicar/pastor (take your denominational pick – for the purposes of this article I will use the term ‘minister’ because for me it is about ministering for Christ to others) as Preacher, Pastor, Evangelist and Leader – but rather a reflection on what that means in the world of an increasingly secular and biblically illiterate 21st Century. As I write this, I have just finished 33 years serving as a minister in the Free Church of Scotland. I am not retiring but heading to Sydney, to serve with, amongst others, Simon Manchester, in seeking to communicate the Good News in a society whose need of it is in inverse proportion to its recognition of that need.   Therefore I hope you will excuse me as I take the opportunity to reflect upon this work that the minister is called to do. Others in this Festschrift have written more thoroughly and adequately about each of these roles, but these are personal observations based both upon decades of experience and watching and learning from ministers of the Word, like Simon Manchester.

2Tim. 4:2 Preacha the word;b be prepared in season and out of season; correct, rebuke and encouraged—with great patience and careful instruction.

Preaching is one of those things that sounds deceptively simple and easy – at least for those who have the nerve to stand up in front of a group of people and speak out loud.   But, as any preacher worth his salt will tell you, preaching is both one of the most glorious/thrilling and most complex/difficult things you can do.   Preaching is the communication of God’s Word in the power of the Spirit to the people of God (and those who are not yet believers) so that they are built up in their most holy faith, convicted, comforted, challenged and converted.

There are people who preach the word; they have content, but they lack connection. What they say is true, biblical and faithful – but they do not know how to apply it. God can use such preaching – in the same way as he could use a donkey to communicate his Word – but in general it is useless.   Such preachers may hold on to those who appreciate that it is the Word that is being preached but they will rarely grow a congregation – because the faithful believers know that their non-Christian friends and family would struggle. As Victor Hugo says in his introduction to his great work, Les Miserables ““To explain the Bible badly amounts to the same thing as to understand the Gospel badly”

On the other hand there are those who connect. They have a rapport with the congregation. They are articulate, superb communicators – but they have little to communicate other than their own personalities and cultural insights. They will gather a congregation but it won’t be one that lasts and produces eternal fruit.

Preaching today is regarded as foolish. But then that is nothing new. Paul reminded the Corinthians that it was through ‘the foolishness of preaching’ that they are saved (1 Corinthians 1:21). It is the same today.   But there are Christians who are wiser than the Apostle – they think that the days of preaching are gone. One leader opined – “Preaching has come to a desperate state where we are now on borrowed time, communicating the gospel isn’t dead but the traditional forms may well be. We need to put to death the monologue and be re-inspired with two-way communication. I don’t think we have the liberty not to be creative anymore.”  This all too common sentiment shows an all too common misunderstanding of preaching. It is not a monologue whether of the lecture, speech or rant type. Preaching is not two-way communication. It is three-way communication. The preacher, the congregation and the Holy Spirit are all involved. It is vertical and horizontal. Without the Spirit it is not preaching. Without the preacher how shall they hear? And without the congregation there is no dynamic hearing.   Preaching is the ultimate in communication – the living Word of God is communicated through the proclamation of his word, deep into the heart, mind and souls of those listeners who have ears to hear.

Just listening to Simon Manchester preach restores my faith in preaching and makes me realize that after over 35 years preaching, I am still a beginner. He connects with people and communicates the Word of God to contemporary society in a way that is a model for the 21st Century. One of the lessons he has taught me is that biblical preaching does not have to be long (just as Sinclair Ferguson has taught me that it does not have to be short!). I marvel at how much truth he manages to get over in 25 minutes.   It is possible to be short and say little. It is possible to be long and say little.   But to be succinct and communicate truths that will have you thinking (and acting) for days after the sermon, is a gift. One that Simon has.

A Scottish minister from another century summed it up well – “The grand work of the minister, in which he is to lay out his strength of body and mind, is preaching. Weak and foolish as it may appear, this is the grand instrument which God has put into our hands, by which sinners are to be saved, and saints fitted for glory. It pleased God, by the foolishness of preaching, to save them that believe. It was to this our blessed Lord devoted the years of his own ministry. Oh, what an honour has He put upon this work, by preaching in the synagogues, in the temple, and by the blue waves of Galilee, under the canopy of heaven! Has He not consecrated this world as preaching ground? This was the grand work of Paul and all the apostles; for this was our Lord’s command: “Go ye into all the world, and preach the gospel.” Oh! brethren, this is our great work. It is well to visit the sick, and well to educate children and clothe the naked. It is well to attend presbyteries. It is well to write books or read them. But here is the main thing—Preach the Word. (Robert Murray McCheyne)