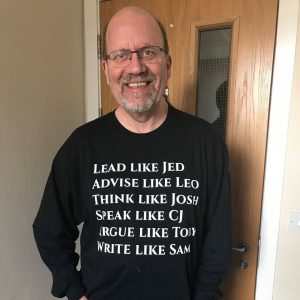 I love the West Wing – it is by far my favourite TV show – watched the box set several times.   It does however have flaws – not least its portrayal of a ‘liberal’ Nirvana…I don’t mind the portrayal – I’m just concerned that people would actually believe it!  There is one clip that has been used many, many times as THE definitive clip for mocking the Bible.   I have wanted to respond to this for years and finally, we have been able to do so – this is our first Third Space video – feel free to pass on, comment….we have recorded three more on other subjects and plan to do another eight before the end of this month.

Thanks to my colleague Steve MacAlpine and our guest Ed Shaw for their excellent input on this….enjoy…

This is the type of content we intend to put on the Third Space website – which we are putting live this weekend (more to follow).  This website is designed for non-Christians who are curious about the most important things in life.

Third Space – An Interview with The Gospel Coalition Australia