I am going to try and provide an ‘impartial’ analysis each week for the December 12th election.  I can be ‘impartial’ because I don’t hold a torch for any of the parties and I don’t regard any of the leaders as competent or trustworthy – which is not to say they don’t have their good points, or that there are not good people seeking to become MPs – it just that the cesspit that is UK politics just now has few political leaders of genuine high quality.    But I will still vote – even if in the end it ends up being a spoilt paper saying ‘none of the above’.  Or I may just vote for the least worst option in my local constituency.   Anyway here is the ‘form’ guide for this week – which is already making my predictions from last week look dodgy!

It’s Been a Bad Week For:

The Tories and Boris Johnson – They have started off high in the polls but already they have had a series of minor gaffes which in this era of instant concocted outrage just get turned into memes.   So Jacob Rees-Mogg says that he would have left the burning Grenfell Tower and this is cited as proof of his disdain for the poor!    The Welsh secretary resigns, Philip Hammond is leaving (although most would regard this as good news).  But in general there is a sense that this has not been a good week for Boris Johnson and the Conservative party.

Nicola Sturgeon and the SNP –  A poll suggested that the Tories were a close second to the SNP in a number of seats in Scotland and may not get the wipe out that they had feared.    The SNP were found to have lied about the state of Scottish education  and this video of Nicola Sturgeon speaking at an Indy rally went viral.n alone had almost 50,000 retweets!).   She came across really badly – an angry, bitter, ‘nippy sweetie’ with little empathy or understanding of those who disagree with her.   The SNP has also complained about numerous things – including the BBC getting their name wrong.   They are the ultimate grievance party. 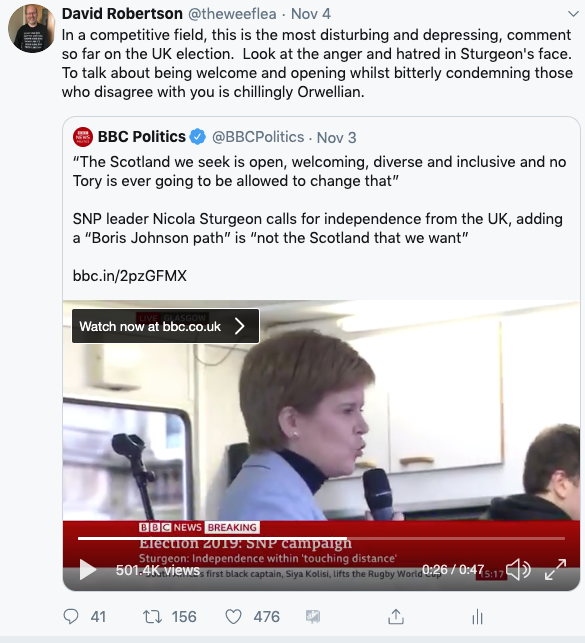 Jo Swinson and the Lib Dems: Nicola Sturgeon is not the only one with a Messiah complex.  Jo Swinson has decided that the whole Lib Dem campaign is going to be based on her and the possibility (around 0%) of her being the next Prime Minister.  To me Swinson comes across like a student union politician with delusions of grandeur. She has had a dreadful start to the campaign with a couple of disastrous interviews, the Lib Dems having been found to have made up electoral figures on some of their leaflets – and the ridiculous lie that there would be a “Remain dividend’ of £50 billion. 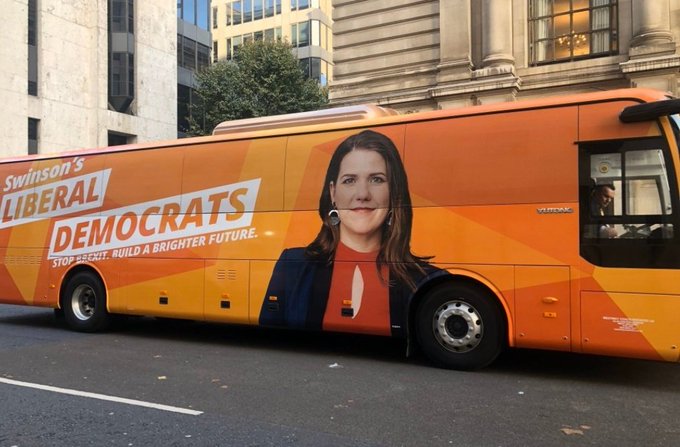 Nigel Farage and the Brexit Party –  Twenty of his candidates have resigned.  His determination to fight 600 plus of the Westminster seats (whilst refusing to stand himself) is the one thing that is most likely to prevent the Tories coming to power.  Ironically we could end up with the man who was largely responsible for us getting an EU vote, being one of the main people responsible for that vote not being fulfilled!

It’s Been A Good Week For:

The Labour Party and Jeremy Corbyn – Despite the fact that their position on Brexit is nonsensical and that their promises read like a fairy story (they actually promised that the next Labour government would end poverty!  Apparently under Labour we will not always have the poor with us!) – they have had a good week.   Firstly it’s now clear that the Lib-Dems will not overtake them – and so they are very likely to hoover up the Remain fanatics (who wouldn’t care if a Maoist anti-Semitic Communist came to power – as long as they stop Brexit!).  Secondly they have a good campaign team who will continually hammer home the NHS message.  It doesn’t matter that the NHS will be no safer under Labour than it is under the Tories, because the NHS is the nearest thing to a religion that secular Britain has, all Labour has to do is keep shouting ‘blasphemy’ and they will get significant support. 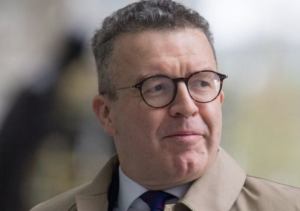 Even as I write there is breaking news which may be worse for the Labour party – although it will keep the focus on them –  Their deputy leader, Tom Watson has resigned (joining the 60 plus MPs who are stepping down at this parliament).

The thought of Corbyn in power terrifies me though – especially when you see some of the people he will put in power – like his former mistress, Dianne Abbott – hear seen stating that Mao did more good than harm!

Kate Hoey – Labour MP – Gave an excellent farewell speech to parliament.  She will be sorely missed.

Andrew Neil – whose programme is absolutely essential viewing if you want to see intelligent and informed questioning of candidates.

The House of Commons – with the appointment of the new Speaker, Sir Lindsay Hoyle. He is an honest, balanced and un-self-important politician – unlike his predecessor, John Bercow. To no one’s surprise –  the old Speaker John Bercow admitted that he was not impartial on Brexit, declaring it “the greatest foreign policy mistake since WW 2”.  Apart from the fact that WW2 was not a ‘mistake’ – Bercow seems to have forgotten about Suez.    I can only hope that with the likes of Hammond, Bercow and Watson gone – they will be replaced with higher quality.    But so far in a depressing, negative and bitter campaign, it ain’t looking good.   Who needs Russian Twitterbots – when we have our own?!

Hopefully the second week will be better….

By the way if you want to know how surreal and unreal modern politics is then consider – Theresa May has just signed a deal with an international speakers company to be an ‘inspirational speaker’!