I’m not the biggest fan of these kind of meetings – basically a committee meeting that goes on for two days. But it has been fascinating watching how the CBF leadership are changing and developing. I have been impressed with the whole team under the stewardship of Peter Kaldor. What has surprised me is how impressed I have been with the consultants and experts they have brought in to facilitate change.

Confession time again. The corporate world is not my world. I am not an ‘executive’ type person. I’m not good at strategies, or business or finance. I am a stranger to the corporate world – but to some extent that is the world I now work in – at least in part. There is a lot I have to learn. 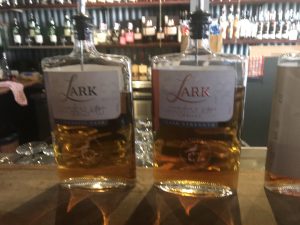 excellent Scotch whisky. I didn’t believe it until last Monday night I had a dram of Sullivan’s Cove – it was astonishing. Almost certainly the best whisky I have ever tasted. For this Scotsman it was an unnerving experience!

There are other things about Tasmania that remind me of Scotland. It is relatively remote – the next stop south is Antarctica. There are significant wilderness areas – and a relatively small population. Tasmania is 60,000 square km, (Scotland is 80,000) and has a population of 515,000. Around half of which live in the Hobart area. I was very impressed with Hobart as a small city.   The weather seems to be more similar to Scotland – colder and windier than the rest of Australia.   Of course there has been a considerable Scottish, (as well as Irish, English and Dutch) influence upon Tasmania.

The following is a wee slide show of some of the sights.

I was encouraged by what I saw of the churches in Hobart and the surrounding area.   They seem to have a significant presence (including seven Presbyterian churches, several Dutch Reformed and an evangelical Anglican bishop) and there is also a degree of co-operation and working together which is less prevalent in the larger centres of population.

I said that the corporate world is not my comfort zone, nor my modus operandi – but I do enjoy meeting people and getting to proclaim the Gospel. Last Thursday’s City Legal, was the last of a series of four breakfast talks on Acts I have been giving to lawyers in the City. I loved being with these men and women – and thought that this last one was the most encouraging. I have also had a number of one to one meetings with people – which again reminded me that people are essentially the same, wherever you find them.   All need Christ.

I hope to return to Hobart this coming week – this time to speak to church leaders, a workers outreach, and church members. I hope my initial impressions are confirmed.

Meanwhile I was thankful to hear of encouragements from our old congregation, St Peters – who are continuing to be blessed and encouraged. Nothing does a former pastor’s heart good, than to hear that his old flock are getting on fine without him – that is a sign of it really being the Lord’s work!   And congratulations to Chris and Sarah as they were married in St Peters last week. That is another thing I really miss – the depth of relationships that comes out of working and worshipping every week with the same young people – they become like your own children.

I pray that the Lord would grant us many more such spiritual children in Australia….
See you next week…

Letter From Australia 12 – National Prayer and a Godly Archbishop