Social media works in mysterious ways.  For some reason this meme keeps appearing on my feed.   Christians largely retweeting this story.  Please stop. 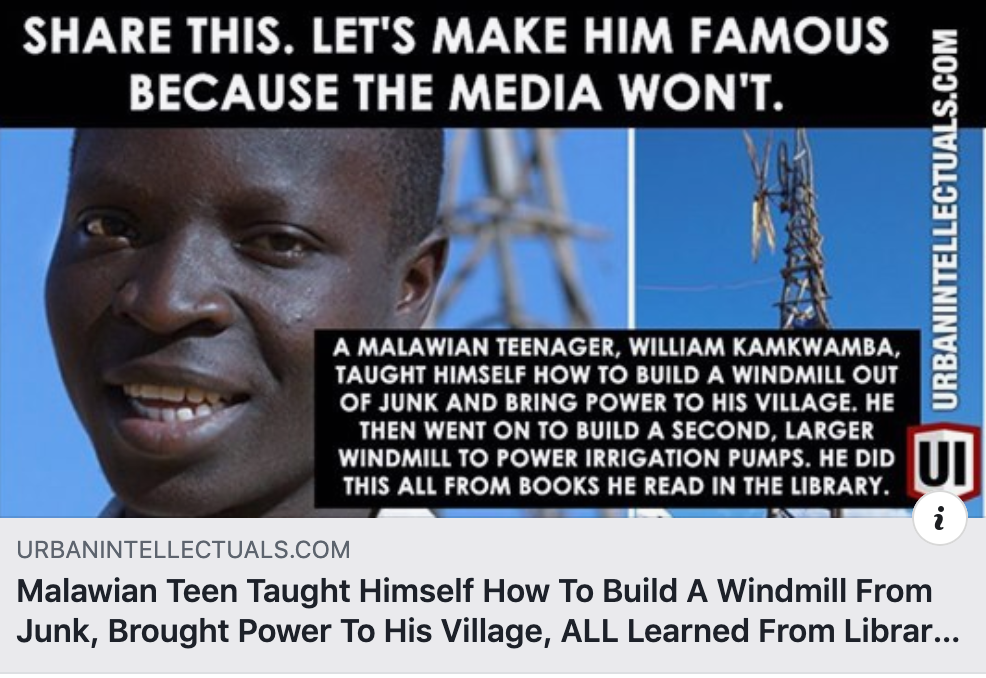 Why are they doing this? Because it fits two narratives – firstly it is a great story.  And secondly it makes the point that the MSM (mainstream media) will ignore stories like this.  The only problem is – its’ false.  Have a look at this.

This was a film made by BBC films, Blue Sky films and others.  It was and is distributed worldwide on Netflix.   There have also been numerous articles and stories about it.  The media who are being demonised have already made William Kamkwamba.

The meme spreads a lie and demonstrates both prejudice and ignorance.  We are claiming something about the media which is demonstrably false, thus showing that we don’t actually know the media we are talking about.

From a Christian point of view – passing on falsehoods (even when we don’t know they are false) is sin.    Look at what the Shorter Catechism says about this (expounding the ninth commandment).   The larger is much longer and more detailed but is well worth us paying attention to.

Q. 77. What is required in the ninth commandment?

A. The ninth commandment requireth the maintaining and promoting of truth between man and man, and of our own and our neighbour’s good name, especially in witness bearing.

Q. 78. What is forbidden in the ninth commandment?

A. The ninth commandment forbiddeth whatsoever is prejudicial to truth, or injurious to our own, or our neighbour’s, good name

Can I suggest first of all that we be very careful what we retweet and pass on – even (or especially) when it comes from someone we trust?  If they are just passing on a false meme then that trust is misplaced.  It’s not too difficult to check on most things.  If we are going to pass on gossip, or harmful information, we need to make sure both that the information is true – and that we have a good reason for passing it on (ie. warning the Lord’s people about false teaching).   But we MUST stop passing on things just because they suit our prejudices.

There is also an element of arrogance and pride in this meme as well.  “we” will make him famous – because the MSM won’t.  No we won’t. And why should we want to?  It’s a lovely, moving and powerful story – let’s not destroy it with our pride, ignorance and prejudices.

By the way – the film is fantastic….Watch it and be thankful.