Watching John Major going to court to prevent the UK government ‘proroguing’ parliament, when he himself had prorogued parliament, reminded me of another time when he demonstrated breathtaking hypocrisy.   This is an article I wrote on the old Free Church website in 2002  – I was interested to see how it shows how the more things change, the more things stay the same!

There is so much to write about this week that it is hard to know where to begin. I had thought of commenting on Europe’s magnificent victory over the US in the Ryder Cup – but then the Daily Record stole my headline – “There’s only one uncle Sam”. Congratulations to all the golfers involved for a magnificent sporting occasion – especially the losing US Captain, Curtis Strange, who behaved with dignity and decorum throughout. 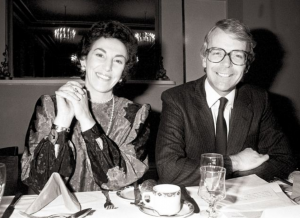 Then I considered commenting on other headlines such as the decline in Scotland’s population, or the case for war against Iraq. However the story in the ‘Steamie’ has undoubtedly been the revelations by the former Tory minister, Edwina Currie, of her affair with the former Prime Minister, John Major. To some this has been a great joke – the idea of the dull, ‘grey’ man of British politics having an affair with the ‘colourful’ Mrs. Currie being a source of much merriment in the British media. However the cheap and sensationalist view of sex is not one that we share.

What is particularly shocking about this revelation is not that it happened but rather to whom it happened. Mr. Major is the British Prime Minister who brought us the policy of ‘Back to Basics’. This was meant to be a return to family values and basic traditional values. To many Christians it sounded good. Here was a conservative Prime Minister standing up for ‘morality’. None of this homosexuality, ‘free love’ or other aberrations of the God-given plan for human sexuality. Sadly it was a sham.   He made this ‘back to basics’ speech knowing full well his own infidelity and betrayal of his wife and marriage vows. Not only do we know about Major but there were also others within the government including David Mellor (Heritage secretary who had an affair with his secretary), Steven Norrie (married Transport Minister who had had five mistresses), Tim Yeo (Agriculture Minister who had an illegitimate daughter with a Tory councilor), and Richard Spring (Parliamentary Private Secretary – now Tory spokesman on Foreign Affairs). Add to this, fellow government MP’s David Ashby, Robert Hughes, Jerry Hayes and Piers Merchant. And these are only the ones we know about. It is little wonder that the public have treated the Tories with the cynicism they deserve.

Is Mrs. Currie right to tell the public the truth? Has she done us all a service? She has been all over the British media – interviews on radio and TV, her book serialised in The Times and of course her own radio show. Why has she told all? There can be little doubt that she is a self-publicist, obcessed with her own importance, and delighting in that most delicious of dishes – revenge. Of course, her revelations about her affair with Major will ensure that her book is a best seller. Money, revenge and self-importance. It is hard not to feel a certain sense of disgust.

Mrs. Currie tells us that we are all grown up now and that these things happen. At least Mr. Major has the sense to declare that it was the most shameful event of his life and then to keep silent. But does it matter what politicians do in their private lives? Mrs. Currie tells us that the British public are concerned about their taxes and the economy – not the sexual dalliances of politicians. She seems to have a point. Surely if Bill Clinton, John Major or Edwina Currie choose to engage in sexual immorality then that is there business and has nothing to do with their ability to run the country?

A Question of Trust

She is certainly right in pointing out that many people in this country and the US are far more concerned about the economy than they are about her goings on. Yet there is a connection. Our economy, our welfare system and indeed our justice system do, to a large extent depend upon honesty and trust. Witness the collapse of the stock markets because of the lack of trust caused by the dishonesty of Enron and others.   To some degree we have to trust our politicians, judges, teachers, economists and doctors. If we cannot do so then we will end up with at best a cynicism which will only justify selfishness and at worst a society where the rule of law has become an arbitrary joke. So it does matter if our Prime Minister announces a policy of Back to Basics and Family Values – having himself been an unrepentant liar and breaker of his marriage vows. This is not to say that we have the right to demand sinless politicians – but we can at least ask for honest ones who are willing to repent and admit when they are wrong.

Which brings us back to Bill Clinton. He was in town this past week- wowing the Labour party conference.   He was good – very good. So much so that people were suggesting that he ought to take his old job back.   He managed to attack the Tories, support Bush’s policy on Iraq (whilst attacking Bush) and generally give a thumbs up to everything Tony Blair wanted. It was brilliant. And vacuous. When you analyze what he said you realise that it was all touchy-feely, full of excellent rhetoric and sound bites and yet almost totally lacking in substance. (Perhaps like too much sound bite preaching today). It was, in fact, sermonic and delivered like a Southern Baptist preacher. And the Labour party loved it – they cheered him and screamed at him as though he were a pop star. A few saw through it. A few questioned this McDonald’s president taking the opportunity to eat a Big Mac at the conference and recalled that it was McDonalds who had sponsored last years conference. A few saw the incongruity of tut- tutting at the Major/Currie affair whilst warmly welcoming a man who at best broke his marriage vows and at worst used his power to exploit and abuse several women. But most swooned and cheered.

What a sad world this post-modern world is – a world where the MacDonald sponsored Labour Party no longer sings the Red Flag and Bill Clinton is treated like a hero and cheered to the rafters for a speech devoid of any substance and policy. A world where the Tories have given in to the mealy mouthed inclusivist pluralism (which includes everyone except those who disagree with it) and now want to show how tolerant they are of sexual deviation. A world where a former senior British politician (Mrs. Currie) can write in our most respected newspaper, The Times, that she prefers if the Conservative party would not talk about traditional family values and that she feared that Mr. Duncan Smith’s speech was being written by someone from a ‘fundamentalist Christian group”.

So there you have it. We can have an Archbishop of Canterbury who dresses like a Druid, Prime Ministers who betray their spouses, Presidents who think they are pop stars and fundamentalist egotists like Mrs. Currie. But the last thing we need is fundamentalist Christians daring to suggest that the Emperor has no clothes! It almost makes you want to turn into one! Thank the Lord that he is the King of kings and that one day all this nonsense will be called to account. Meanwhile we soldier on trying to preserve what we can and seeking to bring the light of Jesus to this absurd and dark society.

Heroes of the People – The Politicisation of the Judiciary

Gordon Wilson – A Man of Integrity and Intelligence