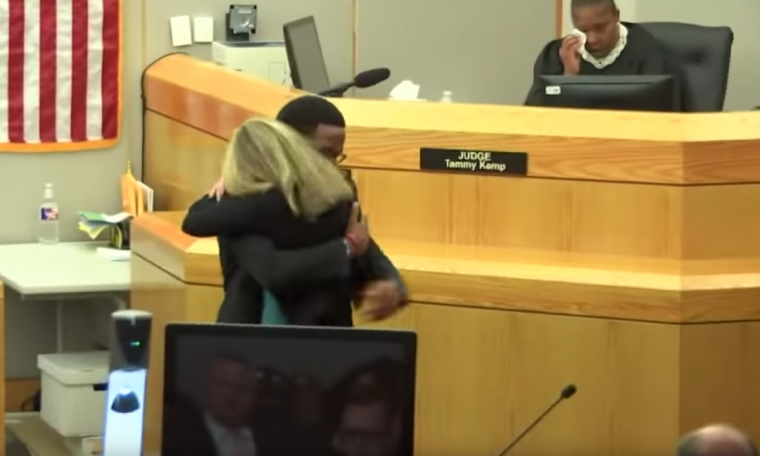 The title they gave is “An astonishing courtroom hug and what it teaches us about radical forgiveness”…I prefer mine!   Radical Forgiveness and Beautiful Grace – the Difference Christ Makes’ because this incident sums up the difference between joyful biblical Christianity and joyless, miserable atheistic ideology! (although to be fair there have already been some Christians who have sought to pour their own particular brand of misery and scorn on this beautiful oil pouring moment!).

The late great Christopher Hitchens used to ask what was considered an unanswerable question – what can Christians do that other people could not?

One answer came this week in the rather extraordinary words and actions of a young African American called Brandt Jean. Brandt’s brother had been killed by a white police officer – Amber Guyger – who entered his apartment and shot him dead while he was eating ice cream. She claimed that she had mistakenly entered the wrong apartment and thought he was a burglar. The court found her guilty and sentenced her to ten years in prison.

The court case was televised live, turning the sad event into a real life soap opera, and was avidly watched. There is one particular clip from that court case which has now gone viral throughout the world – when Brandt told the officer that he forgave her, urged her to seek the forgiveness that Jesus Christ offers, and then went and hugged her. It was a stunning, beautiful and almost unbelievable moment. Even hard hearted cynics like yours truly was moved to tears. It is also one of the most stunning examples of the biblical idea of forgiveness that you will ever see.

Brandt made clear that he was speaking only for himself, not his family or community. There were plenty who, while they appreciated the sentiment, thought it to be daft and dangerous. Hitchens would have agreed. He argued that the Christian teaching to love your enemies is masochistic and evil, because it leaves people at the mercy of the wicked. If you just forgive then surely that gives carte blanche to those who seek to do harm? Is there no justice? Is this just for the weak?

How could he do it?

Most people look at Brandt’s actions and think I could not do it…a sentiment I share – until I look away and look at the Cross – the place where justice and mercy meet. “Steadfast love and faithfulness meet; righteousness and peace kiss each other” (Psalm 85:10 ESV). There justice was done. There forgiveness was purchased. There mercy and justice come together.

Somewhat bizarrely and yet somehow unsurprisingly, the BBC report showed the clip where Brandt hugged his brother’s killer, but not the part where he gave his reason for doing so.

They missed the key part. It is because Brandt was aware both of the seriousness of sin, and the remedy for it found in the Cross of Christ, that he was able to apply that to his own heart and his own personal circumstances. The BBC don’t have to agree with his Christian reasoning, but they should at least acknowledge that this was his reason for behaving in such an extraordinary way.

The judge certainly did. Judge Tammy Kemp came down from the judgement seat and handed Amber her own personal Bible stating ‘you can have mine, I have three more at home’ and then urging her to read John 3:16 before also giving her a hug.

Can anyone imagine what would happen if the UK if a judge did such a thing? The Humanist Society, the Guardian and Richard Dawkins would need therapy! The cries of ‘whatever happened to separation of church and state’ would resonate in the echo chamber. In fact the Freedom from Religion Foundation in the US have already lodged a judicial complaint, on the grounds that what the judge did was ‘unconstitutional’ and ‘an abuse of power’. What a miserable, joyless bunch fundamentalist atheists are! The judge was not acting in an official capacity (her judging had already been done), nor was she imposing a bible on Amber, but this was a personal gesture, giving the person she had just sentenced her own personal bible.

The judge clearly believes in The Judge and I suspect is both a better judge and human being because of it. This week some others judges in Northern Ireland decided in their wisdom that it was a denial of human rights NOT to allow a human child in the womb to be killed. The ideology of death and darkness is sadly now deeply ingrained amongst many of those who both interpret and make our laws.

What Brandt did was not excusing crime. It was not saying to white police officers ‘you can come in and shoot us, because we are so weak’. What he did was not weakness. No, this was an example of an extraordinary strength, a supernatural strength that can only come from within. A strength that flows into the weak from the Cross. It really is the Light shining into the Darkness.

Brandt’s actions also give the lie to another oft-quoted Hitchens statement:

“We keep on being told that religion, whatever its imperfections, at least instils morality. On every side, there is conclusive evidence that the contrary is the case and that faith causes people to be more mean, more selfish, and perhaps above all, more stupid.”

No, there is not conclusive evidence to the contrary. In fact it is Hitchens’ ideology of hating your enemy and seeking revenge, which causes people to be more mean, selfish and stupid. The only thing that breaks the revenge cycle is the radical forgiveness offered and enabled by Christ. The only solution to the hatred, division and bitterness caused by human sin is to have that sin dealt with and people to be forgiven and reborn. Unless the heart of the problem (which is the problem of the human heart) is solved then we will never get out of the depths.

The world has only superficial solutions that do not get us out of the depths. But we have a Saviour who comes down. There is no pit so deep that Christ has not gone deeper still.

Out of the depths I cry to you, LORD;

Let your ears be attentive

to my cry for mercy.

If you, LORD, kept a record of sins,

Lord, who could stand?

But with you there is forgiveness,

so that we can, with reverence, serve you.

I wait for the LORD, my whole being waits,

and in his word I put my hope.

We saw that lived out in the life of this young Christian man this week. The next time you pray ‘forgive us our debts, as we forgive our debtors’, think of Brandt’s example. Beautiful Grace.