I have written about the BBC and Christianity before on this blog – but this is a new shorter article published in this month’s Evangelicals Now.

The BBC and Christianity.

The BBC has been blamed for facilitating Brexit because it was biased against Remainers in that it gave equal time to the ‘lies and propaganda’ of the Leave campaign.   The BBC has been blamed for frustrating Brexit because it was biased against Leavers in that it gave more time to Remainers to spread their ‘lies and propaganda”. If being complained about by both sides is a mark of balance then it appears as though the BBC should be quite pleased with itself. But what about the BBC and Christianity?   Whilst there are a handful of militant atheists who have a fit every time there is a religious service on the Beeb, the majority of complaints tend to be from those of us who think that the BBC has long forgotten and rejected its Christian foundations.

Thought for the Day

I was once asked to give ‘Thought for the Day’ on BBC Radio Scotland – a simple 90 seconds of commentary on today’s issues from a Christian perspective. For some reason the producer was not happy for me to just walk into the studios and do it live. Not only did he need a script with the exact words (to be vetted) but I had to send him a couple of trial scripts beforehand. After he got the first one he phoned to ask me to remove one phrase – “Britain’s Christian traditions”. Why? “Because it might offend people”. “You want me to speak to quarter of a million people without offending anyone? I can’t speak to myself without offending someone! Besides which its true”. “It doesn’t matter if it’s true – you can’t say that”.   And I didn’t. Because I was banned. And in that one phrase the problem with the BBC and Christianity is summed up. 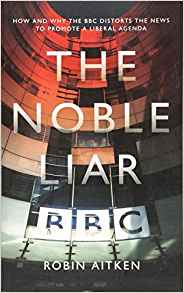 A problem that is summed up and detailed in Robin Aitken’s The Noble Liar. This is one of those books that I would regard as essential if you want to understand our culture. Aitken is a former BBC journalist and executive who was pensioned off after becoming an internal critic. His earlier work Can We Trust the BBC was enlightening, but this one goes much deeper in its analysis. The title of the book derives from Plato’s The Republic where a noble lie is described as a “myth or untruth, knowingly propagated by an elite, in order to promote and maintain social harmony or advance an agenda”. It is presumably what Jean Claude Juncker, the President of the EU Commission meant when he said: “When it becomes serious, you have to lie”. It is the opposite of the Christian perspective that follows that of Christ – lies stem from one source only – the Father of Lies (John 8:44).

From Lewis to Dawkins

The BBC, thanks to its founder Lord Reith the son of a Scottish Presbyterian minister, began with a vision of itself as profoundly Christian. But since the 1960’s that position has almost completely reversed. In the 1940’s the BBC ran a series of 33 apologetic lectures by CS Lewis which were eventually published as Mere Christianity. Sixty years later the BBC acted as the main propaganda outlet for Dawkins The God Delusion – as Aitken observes – “Partly thanks to the BBC’s heady sponsorship, The God Delusion became a global phenomenon which– given its intellectual mediocrity– takes some explaining. “ The BBC is now a secular humanist organisation that pays lip service to religion, but struggles to cope with any aspect of biblical Christianity.

A couple of years ago I was asked to become a regular contributor on Radio 5 Live – reviewing the newspapers at the ridiculous hour of midnight. My first show was a complete set up – having been given the papers and told the headlines we were to look at, the first question was about a transgender programme that had just been broadcast. My fellow panellist, a rather snooty Tory ‘progressive’ MP, mocked and sneered at ‘the Wee Free”, but we ended up having a really good discussion with a Trans activist and others who phoned in. In fact it was too good. Various pressure groups got in touch with the Beeb and I was just dropped. No official reason given but I suspect it was because it was too dangerous to have someone on who appeared to be reasonable and yet hold to the Bible.  Ambush at High Midnight – Reflections on the Stephen Nolan Show –BBC Radio 5 Live.

Another producer told me that he thought my social views were representative of at least 50% of the population but were almost totally unrepresented on the BBC. “We don’t do diversity” was his telling and chilling comment.

A Seat at the Table

Evangelical Christians need to encourage the BBC to be true to its Christian foundations and its self-professed values of tolerance, equality and diversity. A warning. We must not think that just by getting on the BBC we are being treated ‘equally’. We must be allowed to share and proclaim the whole Gospel, even the bits that the social liberals find distinctively uncomfortable. There is no use in us having a seat at the table if we get no say in the menu. It is better to be banned than to be acquiescent in covering up the truth. The Holy Spirit will not be silenced.   We will take no part in the ‘Noble Lie”.

Does the BBC Reflect or Shape our Society?