On Sunday evening I had the privilege of taking part in BBC Scotland’s Debate Night.  Another one off the bucket list (actually it’s Questiontime I really want – but this was a start!)….It was an interesting experience – you can watch the whole show here or it is being repeated on BBC Scotland tonight at 11pm. 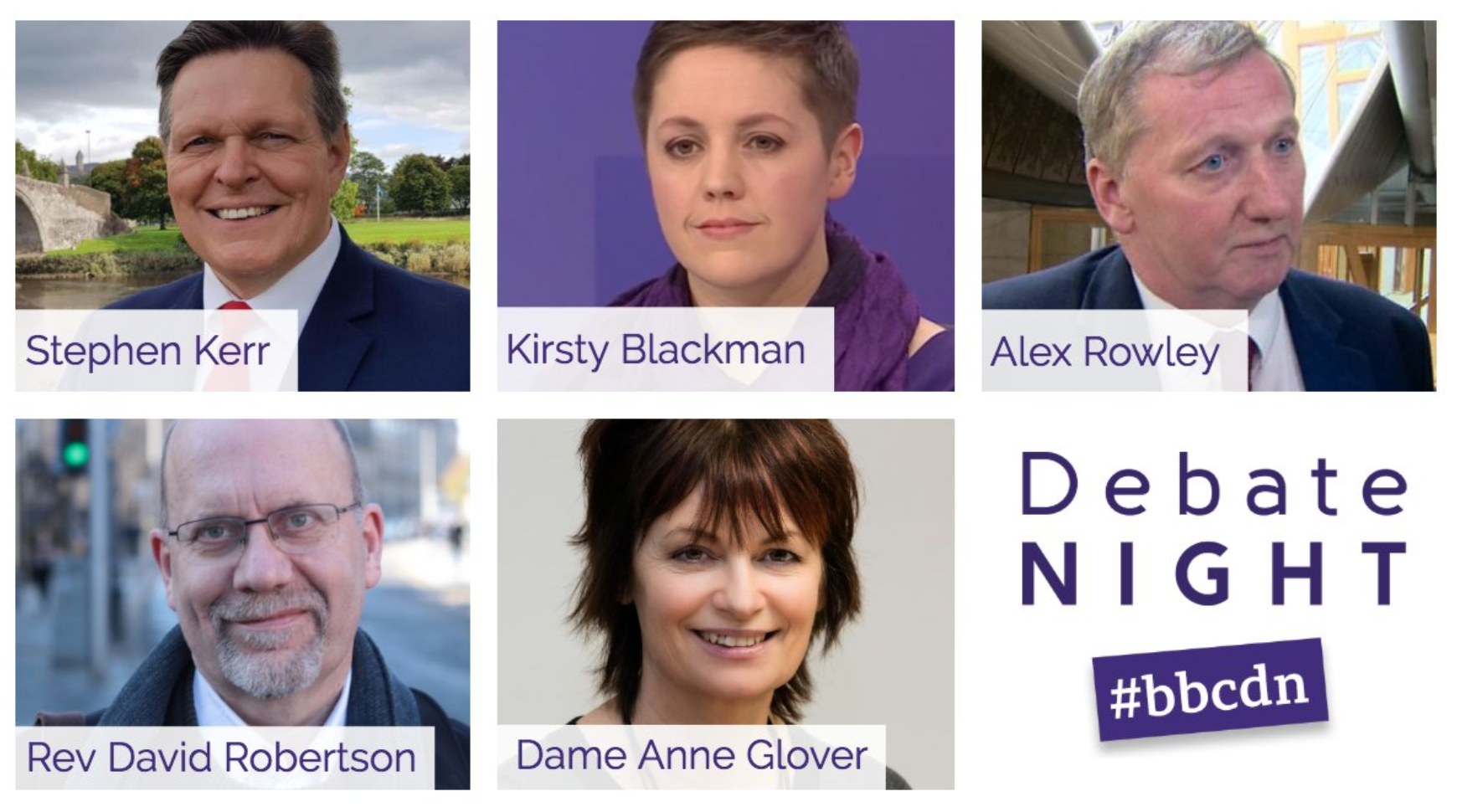 I was impressed with the professionalism of the BBC staff who make the show, especially the host, Stephen Jardine.  The audience was small, but again I was impressed with their quality.   And I enjoyed meeting with the other panelists –  Kirsty Blackman (SNP MP); Stephen Kerr (Conservative MP); Alex Rowley (Labour MP) and Dame Anne Glover (scientist from the University of Strathclyde).   It is a recorded show – but it is recorded as live – so there is no opportunity to go back over things.  It’s also interesting that we did not know the questions beforehand – not even a hint.

In the ten minute warm up Stephen asked me when I had last read the bible!  I think it was a kind of ‘gotcha ‘ question which maybe backfired a wee bit!  Because the answer was ‘about an hour ago – I was reading it on the train, preparing for coming here!”.  I got the impression that there were some people who were surprised that a minister actually read the Bible!

As I was coming home on the train I did have a feeling of disappointment – and even frustration – and not just because yet again the train was late!  The disappointment was not with the BBC or any of the other panellists – but rather with myself.   Neither was it just because I thought of all the things I could have said – but didn’t…or even a wee bit of concern about a couple of things I did say!   No the thing that bothered me was ‘did I let Christ down?”.   The trouble is that I was not on there to preach or shout bible verses – but to discuss political issues – and as I indicated – there is not one particular Christian position on Brexit, or Donald Trump or the NHS – the only three questions discussed.

But there is still a witness aspect.   One has to be careful with this – some people think the witness is if people like you, think you’re nice or clever, then you have been a good witness.  But that’s’ not the case.  If that is all there is, you have just been a witness to yourself – and our aim is to point people to Christ.    This is however connected with how we conduct ourselves, the language we use, and the arguments put forward.   I don’t expect everyone (anyone?) to agree with me on everything – but I want people to see that it is possible to be a Christian and think through these things.   My main aim is to get to the philosophical foundations that underlie many of the questions and answers.   For me, this is largely ploughing, with a bit of sowing.   My initial reaction was that I had failed.  On reflection, my more considered view is that whilst it wasn’t as bad as I had feared,  I could have done a lot better.  I did not realise the time, and I was tired emotionally and physically.   But I will learn from the experience – and hope to be able to engage in this way on other occasions, in Australia (Q and A are you listening?!) and the UK.

Here are the two bits that the BBC tweeted:

.@theweeflea says that the “SNP have been consistently wrong” by supporting the EU #bbcdn pic.twitter.com/NdZWL7fLtK

The Visit of President Trump

Little did I realise that when I mentioned Strathclyde University accepting money from the Chinese government, I was hitting the nail on the head!  Dame Anne Glover rightly spoke about the importance of values – and was happy to say that she would protest against President Trump because of her values – even if it was economically disadvantageous to her University.  But when asked about the Chinese, she was silent.  When I got home I received a message from a parent of a student who attends the University of Strathclyde’s Confucius Institute    informing me that the University received a considerable amount of Chinese money and had welcomed The Chinese ambassador.    So Dame Glover would refuse money from Donald Trump because of his misogynistic views and anti-Muslim views,  but welcomes with open arms a government that forces women to have abortions and imprisons Muslims!  Although I didn’t know it at the time – it is a classic example of the double standards of the progressives – whose ‘values’ seem to ebb and flow according to what they are dealing with.   My problem is not with Strathclyde receiving money – in the world of real politik that may be the best thing to do (thats another debate) – its the double standards I don’t like.  Real politik for some – purity for others!  (By the way I think that we should welcome both Trump and Xi Xinping – as they are major leaders and we should seek to influence them and do what we can to mitigate the policies we don’t agree with).

I realise as well that some (but not most) of my American friends on here will object to the fact that I stated that President Trump was rude and boorish and that he was not a Christian.  The answer to that is straightforward – it’s the truth.  I respect the office of the President and think that as President he should be welcomed and honoured here.   And I think that God can use him (as he could use Clinton, Obama or Bush).  But I will not allow the Gospel and the future of the Church to be tied to a man who shows no understanding of the Gospel and no fruit of the Spirit.  Trump may be your President – but he is not my brother in Christ, nor my Saviour.   And I object strongly to President Trump being viewed as an ambassador for Christ.  He isn’t.

Speaking of objections – there were those who objected, in the name of tolerance and diversity,  strongly to my even being on the programme.   Here are a few samples of the messages I received.

There were others with even more offensive language – than I won’t post on here…but what was interesting was that on their own Twitter feed, Debate Night has a wee section which says you can see more posts – but warns they are hidden because they may be offensive.  The ones above (and worse) were fine but this one below – apparently had to be hidden!

There were also lots of people who got in touch who were positive and I am thankful for that – and especially for those who prayed.  May the Lord grant many more such opportunities and may I use them better!

The BBC and Christianity