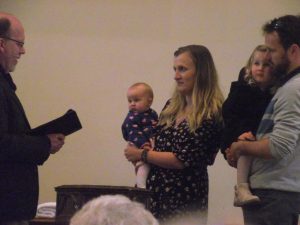 Baptism is a divisive subject amongst some Christians – which is a shame because it is a sacrament which is supposed to unite.  There is one baptism into the body of Christ.   I accept, understand and empathise with my Baptist brothers and sisters who by conviction think that only those who have come to a saving faith should be baptised (it’s not fair to call it adult baptism because children and teenagers can also be baptised in this way – for example I have baptised a seven-year-old on their own profession of faith).  It is a position I once held with great conviction – but I would make a simple request of my Baptist brothers and sisters – please understand that there are those of us who baptise infants who do so, not because of tradition, or superstition, or ignorance of the Bible; but because we are convicted that this is Biblical.   So here are my ten reasons from the Bible why I rejoiced in being able to baptise my granddaughter, Evie, last Sunday.

2. Because the majority of recorded baptisms in the New Testament were household baptisms – The Lord opened her heart to respond to Paul’s message. 15 When she and the members of her household were baptized,b she invited us to her home. “If you consider me a believer in the Lord,” she said, “come and stay at my house.” And she persuaded us.  (Acts 16:14-15) ….

They replied, “Believe in the Lord Jesus, and you will be saved—you and your household.” 32 Then they spoke the word of the Lord to him and to all the others in his house. 33 At that hour of the night, the jailer took them and washed their wounds; then immediately he and all his household were baptized. 34 The jailer brought them into his house and set a meal before them; he was filled with joy because he had come to believe in God—he and his whole household. (Acts 16:31-34)

What intrigues me about this is that the jailer is told you (singular) believe and you and your household (plural) will be saved.  Why do we not expect to see household salvations as the norm today?

3. Because the New Covenant is more generous than the old – 11 In him you were also circumcised with a circumcision not performed by human hands. Your whole self ruled by the flesh b was put off when you were circumcised by Christ, 12 having been buried with him in baptism, in which you were also raised with him through your faith in the working of God, who raised him from the dead. (Colossians 2:11-12)

Paul here links the sign of the Abrahamic Covenant – circumcision with the sign of the New Covenant – baptism.  The Passover becomes the Lord’s Supper, the Sabbath becomes the Lord’s Day, and circumcision becomes baptism.  Now if the old Covenant sign was extended to the children of believers, why would the NT one not be?   Why do we have no example in the New Testament of a child born into a Covenant home having to wait until they were of age until they were given the Covenant sign?

5. Because she is Holy –  ” For the unbelieving husband has been sanctified through his wife, and the unbelieving wife has been sanctified through her believing husband. Otherwise your children would be unclean, but as it is, they are holy.” (1 Corinthians 7:14)  Children of believers are holy.  Set apart for God.  They belong to the set apart Covenant community.  They should receive the sign of that community.

6.  Because she needs the Holy Spirit –  “ ‘In the last days, God says, I will pour out my Spirit on all people. Your sons and daughters will prophesy, your young men will see 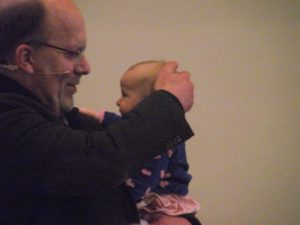 visions, your old men will dream dreams.”  (Acts 2:17).   Peter on the day of Pentecost cites the prophecy of Joel – a promise that all the Lord’s people would be given the Spirit.   Water baptism is deeply connected with Spirit baptism.  The one is a physical sign of the other.  Water baptism is an initiation into the visible church.  Spirit baptism is an initiation into the invisible church.  Water baptism does not confer the Spirit on a child, just as it does not confer the Spirit on an adult.  But it is a sign.   Who knows when the Spirit will work.  Jeremiah was set apart in the womb.  John the Baptist was filled with the Spirit in the womb.    I pray that the Holy Spirit will even now be working in my granddaughter’s life.

8. Because of Faith –  “Some men came, bringing to him a paralyzed man, carried by four of them. 4 Since they could not get him to Jesus because of the crowd, they made an opening in the roof above Jesus by digging through it and then lowered the mat the man was lying on. 5 When Jesus saw their faith, he said to the paralyzed man, “Son, your sins are forgiven.” (Mark 2:3-5).  What is interesting about this story is that when Jesus saw ‘their faith’ (plural) he said to the man ‘your sins are forgiven’ where the your is singular.  You can’t have faith for other people – but you can bring people to Jesus is faith.  And that is what Evie’s parents were doing.   I hope they will bring up Evie in the faith that she will become a Christian, rather than the fear that she won’t!

9. Because Jesus wants us to bring the Little Children to him – “People were bringing little children to Jesus for him to place his hands on them, but the disciples rebuked them.  14 When Jesus saw this, he was indignant. He said to them, “Let the little children come to me, and do not hinder them, for the kingdom of God belongs to such as these. 15 Truly I tell you, anyone who will not receive the kingdom of God like a little child will never enter it.” 16 And he took the children in his arms, placed his hands on them and blessed them.” (Mark 10:13-16) – I know that this verse is not speaking directly about baptism – but it does indicate the attitude of Christ.  Should Christian parents do as many militant secularists want, and keep their children away from the Church until they can make their own mind up? Or should we be like the ‘Christian’ sect who taught that children were part of the world and not the church, and therefore parents should not eat with them?   No – the children of believers belong to the Lord, and we should bring them for blessing to Him.  Whilst it’s not wrong to bring them for an infant dedication (a dry baptism) – surely it is better to bring them through the sacrament that He has ordained?

10.  Because God is Faithful –  “But from everlasting to everlasting the LORD’S love is with those who fear him, and his righteousness with their children’s children—18 with those who keep his covenant and remember to obey his precepts.”  (Psalm 103:17-18) .  When I baptised my granddaughter I was saying neither the parents nor the grandparents can care for this precious child as much as you can O Lord.  You are faithful.  We entrust her to you.

Those are the biblical reasons – you may not accept them, or my understanding of them – (and I don’t intend to have a pointless time-wasting debate about them) but I hope at least you will understand why I baptised my granddaughter.

I could add historical reasons – AA Hodge points out that this was the practice of the early Church – Irenaeus (born AD 97); Justin Martyr (138), Tertullian (160), Origen (185), Cyprian (253) and Augustine (354) all testify to it.  You could, of course, argue that the Church very quickly went wrong- I think it is unlikely!  But I agree that it is better to stick to the biblical reasons:

I leave you with the blessing and psalm we often use at baptisms.

Little child, for you Jesus Christ has come, he has fought, he has suffered. For you he entered the shadow of Gethsemane and the horror of Calvary. For you he uttered the cry ‘it is finished!’ For you he rose from the dead and ascended into heaven and there intercedes – for you little child even though you do not know it.
But in this way the word of the Gospel becomes true; ‘We love him, because he first loved us.

Psa. 117:1    “Praise the LORD, all you nations; extol him, all you peoples. 2 For great is his love toward us, and the faithfulness of the LORD endures forever. Praise the LORD.”

Baptism – A personal Journey in which it is discovered that infant baptism is Biblical!