This is the editorial from the April Record.

Imagine the scene. You are a child in school attending a guidance class and are told by the teacher, ‘There are 73 different genders.’ When one of the pupils pointed out that there were two genders, they were laughed at by the rest of the class. This was not in a school in California, or Brighton. This was on the island of Lewis. And this is not unusual. Pupils all over the UK, including Scotland, are being indoctrinated in the latest sexual philosophy, known as Queer theory. 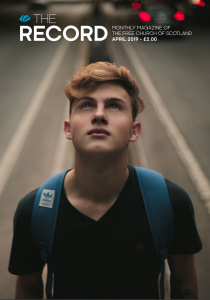 Not everyone agrees; some people are resisting. When Parkside Community school in Birmingham sought to impose a sex education/relationships programme entitled ‘No Outsiders’, it was so strongly opposed by the parents that it had to be withdrawn. This was because the majority of parents are Muslim. I was impressed by how articulate and reasoned the Muslim spokespeople were – despite the desperate attempt by the UK media to portray them as homophobic bigots. Now another four Muslim majority schools have also withdrawn the programme. Meanwhile in schools up and down the land, Christian parents are allowing their rights to be overridden and are meekly acquiescing in this new programme of state indoctrination. Ofsted have made it a priority to ensure that LGBTQI indoctrination is practiced in every school.

Many Christian parents are confused about this because of the language that is used. After all we all want to live in world of ‘love’ where there are no outsiders and everyone is respected. We all deplore the idea of people being bullied. But we need to understand that under the Trojan horse of teaching tolerance and being against bullying, the LGBT activists are seeking to impose a sexual philosophy that is at its core both anti-Christian and harmful to humanity.

Take for example the threat of bullying. We all want to stop bullying but does that necessitate teaching Queer theory to our children? Would it not be better to deter bullying by teaching the biblical truth that all human beings are made in the image of God and are as such to be treated with dignity and respect? Besides which, the extent of homophobic and transphobic bullying has been greatly exaggerated. The “Ditch the Label’ annual bullying survey of 2017 says 50% have experienced bullying because of their appearance – but only 4% because of sexuality and 3% because of gender identity. These are the least important categories for bullying. 91% of teachers say they have never or rarely seen transphobic bullying (81% for homosexual bullying). But on the basis of self-selecting surveys from Stonewall and other LGBT advocacy groups the government pour large sums of money into these groups in order to help them propagate their doctrines. It pays Stonewall and others to exaggerate the extent of bullying.

Under that guise they are now seeking to impose, with the full blessing of the government, a philosophy that is not only anti-Christian but is harmful to all children. It’s a form of child abuse to tell children that they can choose their own gender. One seven year girl from my church came home to her parents in tears, ‘Mummy, am I a boy or a girl? Because the teacher says I can choose.’ Another 14-year-old boy was told by his guidance teacher that he might be suffering from depression because he was a girl trapped in the wrong body. This is nothing but state sponsored child abuse.

It is not a coincidence that mental distress amongst our children has increased exponentially in recent years. Serious eating disorders, self-harm and other forms of mental disorder, including GID (Gender Identity Disorder) are on the rise. The progressive activists have largely switched from gay issues to trans issues and as a result we are bombarded almost every day with endless stories about how gender is just a social construct and those who wish to change gender can do so just by self-identifying as whatever gender they wish.

This, along with the use of the internet, has resulted in the Tavistock Clinic for gender reassignment being overwhelmed with the increase in children presenting with symptoms of gender distressed fluidity. The quiescent rate within the population which remained at 0.07% has in the last 9 years increased by a factor of 4,415 (from 40 in 2009/10 to 1806 in 2017/18).

The UK governments proposed RSE programme is also a form of child grooming. “Child grooming is befriending and establishing an emotional connection with a child, and sometimes the family, to lower the child’s inhibitions with the objective of sexual abuse.” (NSPCC) Whilst I accept that this is not the intent of the government and the pressure groups putting this forward, it is the effective result. This sexual indoctrination of young children prepares them for early sexual experimentation, normalises it and, in so doing, opens the door for sexual predators. I was saddened to hear of a youth sex counsellor in my own city of Dundee handing out condoms to children as young as ten in a park near my home. What message does that convey?

Grooming is also facilitated in many cases when there is a removal of parental authority and control. Remember that the new RSE is compulsory with no parental opt outs allowed. As of September 2020, Relationships Education will become mandatory in all primary schools in England (both state and independent), and Relationships and Sexual Education will become mandatory in all secondary schools. The desperation of the Scottish government to be ahead of the UK in the progressive race to the bottom will ensure that we are not far behind. It is incredible that it is a Conservative government (doubtless thinking that it will rid them of the ‘nasty party’ label) which is spearheading this. The government makes no secret that its aim is to use the education system to promote LGBT lifestyles and identities. Ofsted have already made this a major part of their school inspection regime.

Christian parents need to follow the example of our fellow Muslim citizens by insisting on our basic human right to have our children educated according to our own beliefs. Article 26 (3) of the Universal Declaration of Human Rights: ‘Parents have a prior right to choose the kind of education that shall be given to their children.’ Article 18 of the Universal Declaration of Human Rights: ‘Everyone has the right to freedom of thought, conscience and religion; this right includes freedom to change his religion or belief, and freedom, either alone or in community with others and in public or private, to manifest his religion or belief in teaching, practice, worship and observance.”

European law states the same principle: ‘In the exercise of any functions which it assumes in relation to education and to teaching, the State shall respect the right of parents to ensure such education and teaching is in conformity with their own religious and philosophical convictions.’ (First Protocol, Article 2)

Scottish law abides by the same principle. ‘… education authorities shall have regard to the general principle that, so far as is compatible with the provision of suitable instruction and training and the avoidance of unreasonable public expenditure, pupils are to be educated in accordance with the wishes of their parents.’ Section 28 of the Education (Scotland) Act 1980

Education authorities, under pressure from Stonewall and The Equality Network, do not have the right to undermine parents by taking away their right to have their children educated according to their religious and philosophical convictions. Even as I write this editorial, I am listening to Prime Minister’s Questions where, amongst other issues, the Prime Minister is answering a question put forward by a Labour spokesperson, stating that if parents want to be responsible for their children’s education on this issue they are bigots!

For the sake of not only our own children but for the love of others (especially the poor, who are the ones most affected by this sexual experimentation and indoctrination) we must take a stand in the State schools. It’s not enough for us to survive on fond memories of when we are at school, we need to know what is happening now. We need to support teachers, headteachers and other staff, whether Christians or not, who are prepared to make a stand against the intimidation and bullying. And if that does not work, we need to ask what we are doing in sending our children to be schooled and indoctrinated with anti-Christian teaching, and return to Knox’s principle of ‘where you have a church, there you have a school.’ It’s not just about human rights – it’s about our God given responsibilities. It’s the same question that faced the 1st century Christians – who will we obey, Caesar or the Lord? 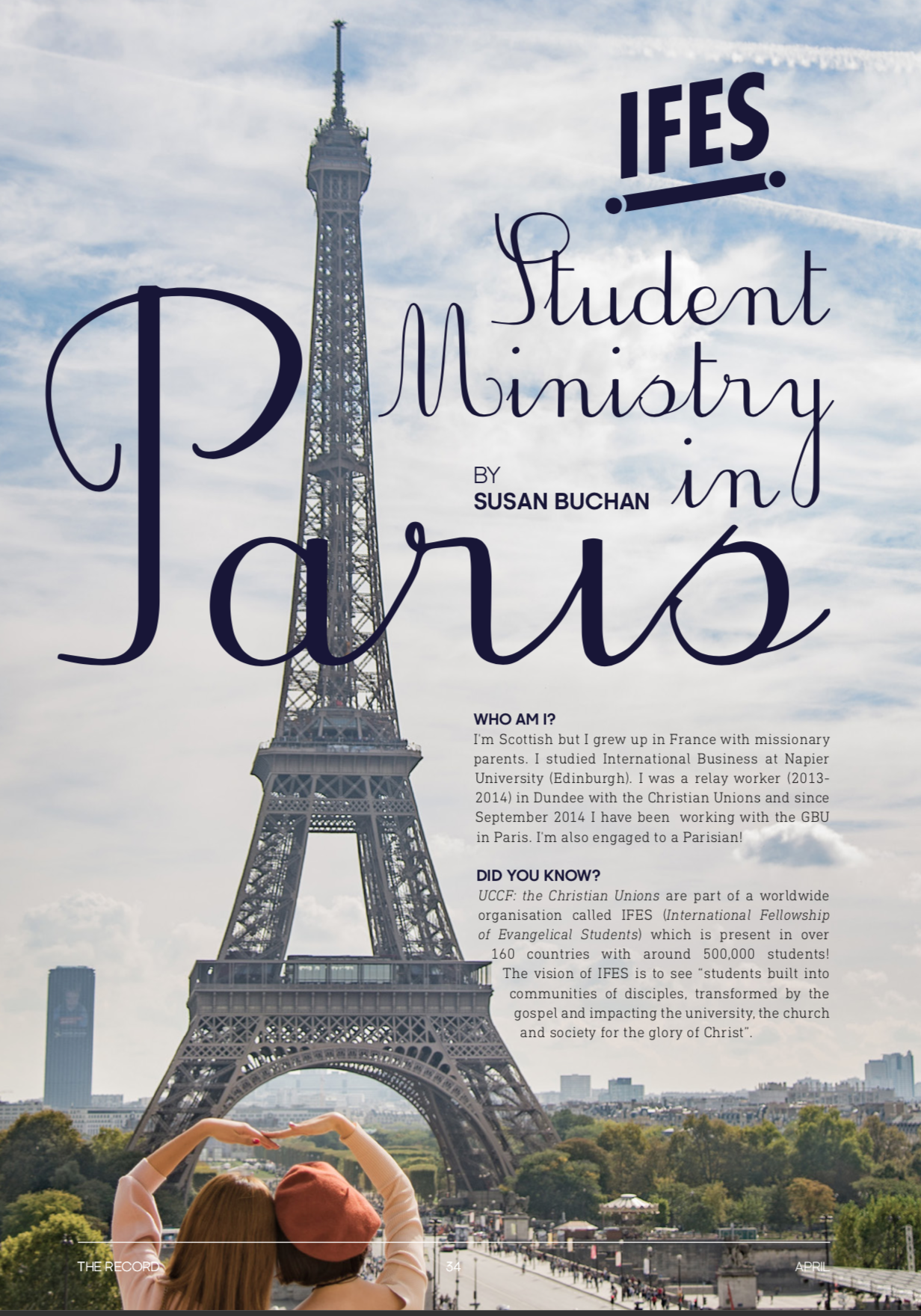 Amongst other features in this months Record we have a great article about IFES work in Paris.

And a poem from John Milton – 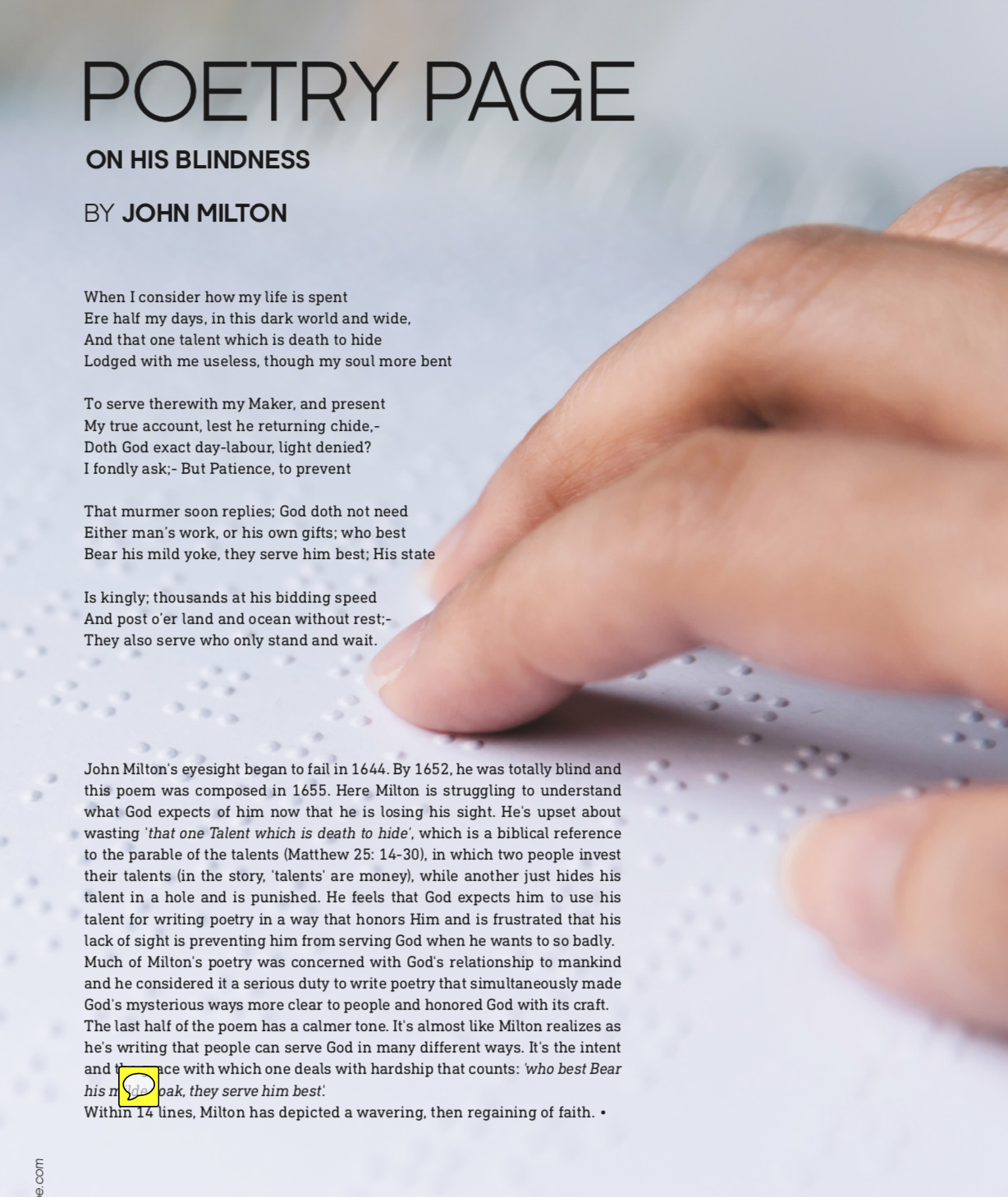