Thanks for your note telling me that I was banned.   I must admit it was a bit of a shock.

This is what you told me:

We’re writing to let you know that your account features will remain locked or limited for the allotted time due to violations of the Twitter Rules, specifically our hateful conduct policy. We do not allow people to promote violence against or directly attack or threaten other people on the basis of race, ethnicity, national origin, sexual orientation, gender, gender identity, religious affiliation, age, disability, or disease. Please note that continued abusive behavior may lead to the suspension of your account. To avoid having your account suspended, please only post content that abides by the Twitter Rules: https://twitter.com/rules#hateful-conduct.

I wondered what I had done that was hateful conduct?   Was it the IPC, Free Church, Didasko Fellowship or Church of Scotland for this article?   Could it have been that Trans activists were upset about this exposure of their hatred?  (I find it interesting that you permitted this young girl to be abused and threatened with rape on your platform and yet you banned me?).   No apparently the reason for the ban was the following…

Before I answer your accusation of hate – lets set the context….

Our Great Leader had tweeted – 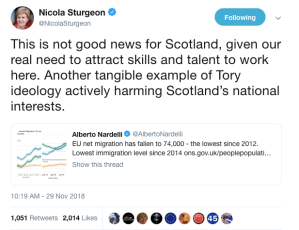 Lets leave aside the ‘hateful’ attitude towards Tories (when you say this word you need to remember to spit it out to get the full effect).  I responded to this tweet with the following:

A discussion ensued, part of which was this Tweet that got me banned.

I have asked you to explain why I have been banned but so far, in that wonderful way you have with customer relations, you have not answered.

Was your objection (or the person who reported me) to the use of the term Queer theory?  Why? ‘Queer’ is part of the LGBTQIA group and is within that an honoured term – not a term of hatred.  Queer Theory is a recognised sociological philosophical theory and is called that by its creators and supporters.  Surely Twitter does not consider the term ‘Queer’ to be hate speech?

So perhaps it must have been the phrase ‘lets kill all the unwanted children’.  I realise that you are an American company  based in California, but you employ apparently highly educated people who must recognise the concept of irony.  My tweet was not advocating killing unwanted children – it was responding to someone who was suggesting that.  In other words I was arguing against killing unwanted children.  On the other hand the person I was arguing against has posted that the baby in the womb was an unwanted parasite which could and should be eradicated, like any other virus, if the mother so wished.  I find it bizarre that I was arguing for keeping children in the womb alive and got banned for so doing, whilst you let someone describe children in the womb as parasites that need to be eradicated continue.  Is that your version of love v. hate?!

Whilst I have been on your platform I have regularly received all kinds of abuse which you have seen fit to leave as acceptable and apparently fits your community standards. I won’t bore you with a whole list but let me just give some from this thread that you have permitted to remain.

Thats two of your ‘hate’ categories ticked already.  Religion and mental disability.  Yet no ban. Or how about this one?

People like me?  Jews?  Christians?  Again it is a reference to my religion- and is a less that subtle hint that people like me should be ‘on our way out’.    Again, no ban.

Amazing that you consider calling someone a creepy, fat, old misogynistic religious nut (ticking about five of your boxes) fine, but arguing that we should not take the life of babies in the womb is ‘hate speech’.

Of course the reality is that you are not really bothered about hate – except when you redefine it as ‘anything spoken against any ideology we approve of’.  You have set yourselves up as God, judge, jury and policeman.   You allow, even encourage, hatred against those who do not hold to your ideology – and you ban those who, even though there is not an ounce of hate in their speech, disagree with you.   You are an authoritarian, illiberal and hate filled organisation – who cannot stand the prospect that someone somewhere might actually disagree with your self-evidently brilliant ideology.    It’s almost beyond parody that you can ban someone for seeking to defend the weakest and most vulnerable in our society – and then claim that you are doing so in the name of Love!

You are also a bullying organisation.  Note your message to me.  I can appeal the ban but it could take several days.  However if I remove it and admit guilt (evidence of which will remain by a note you leave) then there is no right to appeal and if I do it again I can be permanently banned.  Just like to you did to Meghan Murphy .  You banned a woman for saying that a man who called himself a woman was him.  You allow threats and abuse to remain on your platform yet ban someone for using a male pronoun for a male who wants to be a woman.  There is a deep-rooted irrationality if not misogyny in this position.    So I had a choice – admit guilt and get a short ban – or appeal it and get a long ban.  It’s a despicable and cowardly way to behave.

I enjoy using your platform but to be honest, the way you are going (illiberal, authoritarian and irrational bullying) I don’t expect to be able to use it much more.  And of course you will go the way of all dictatorial organisations – down.   The revolution will eat itself.

Meanwhile I will continue to use your platform to undermine your hateful and irrational ideology.  And I will do it by using logic and love – the love of the Logos.   We don’t need Twitter (or Facebook, or government or the media) to be able to speak of Christ.  And you will never silence us.   Though you kill us the very rocks would cry out!

I hope you will repent and come to your senses and use this fantastic gift you have been given, for good and not for evil.    Meanwhile I wait for your apology and for an outbreak of common sense in Silicon Valley,

Yours logically and lovingly