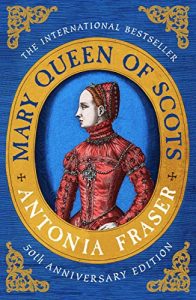 Given the recent film Mary Queen of Scots – Woke Movie of the Year  I thought I would read this biography by one of my favourite writers – Antonia Fraser (her book on Cromwell was very influential in my life!).  This is a superb book – although Fraser is clearly biased in favour of Mary (perhaps because of her Catholicism!)…but then I have to admit that I was biased against Mary (perhaps because of my Calvinism?!).   Fraser’s book on Mary is the one that made her reputation as a great historical writer – and deservedly so.  It is full of detail, analysis and I think quite fair.  In fact she has made me question my own prejudices and given me a fair more sympathetic view towards the tragic Mary – who seems to have been more sinned against than sinner!   I thought this wee detail was fascinating!

Two letters are directed to the cardinal of Lorraine, one containing the suitable, if somewhat priggish sentiment: ‘Many people in these days, mon oncle, fall into errors in the Holy Scriptures, because they do not read them with a pure and clean heart.’ Curiously enough, one of the letters is actually addressed to John Calvin: but there is no evidence that the letter with its solemn, childlike invocation, ‘Christus filius Dei te avocet, Calvine’, was ever actually dispatched and it seems extremely improbable that it should have been more than a youthful exercise, the original inspiration for which remains obscure.

This is a wonderful and moving BBC documentary – of the kind that the BBC at their best do so well.   It is a look at the holocaust through the eyes of the few survivors who are still alive today.   What struck me most was the quite dignity and depth of character amongst the survivors.

“Anyone who’s got a roof over their head and food in the belly – forget the trauma”!

“There has to be a God, despite what we experienced.  We just do not understand….but that is what faith is.”

I contrast this with the pop psychology displayed by one of their daughters, insisting that they should cry in public and let it all out.  – most of the survivors did not want to cry in public…why should they?

We visited the Harris Hotel last weekend for the Harris Conference – Revival, Renewal

and Reformation in Lewis and Harris   All I can say is that I would highly commend it.  Apart from the beauty of Harris, the Harris Distillery and the North Harris Free Church all being on the door step – this is a family run hotel which is warm, comfortable and with excellent food – and a great whisky selection.   Worth going to Harris for!

I changed my computer this past week – I hate the hassle of doing it – its worse than moving house!  My laptop is what I use at home, at work, on the train and elsewhere to do my writing and this blog and to record Quantum.  I am not a techie at all and so I need something that is powerful, clear and simple.  The Macbook Air is great for that and so I was happy to move to the latest model.  So far I have not been disappointed.  The screen is incredible and the sound much better than the previous version.  I hate the fact that there are no USB outlets and so I have had to buy an adaptor  – and also that because of cost I downgraded from 500GB to 250GB – which just means I have to use Dropbox and other online storage systems more.  But I am very thankful for this wonderful technology – may I use it be the glory of God.  (Unusually for a Mac I found that the latest version was £250 cheaper on Amazon).  This time I also bought an excellent protective plastic case….

This is a kind of guilty pleasure.  I know that I should not really like a 70’s/80’s pop/disco band but I love this album – or 50% of it.  I sometimes listen to it when I am walking to work – as it is a good pace setter.  They are such an unusual band.  There is also a strong Christian influence that comes through – not least in songs like Mary’s Boy Child or The Rivers of Babylon.

The song that makes me smile the most is Rasputin….its catchy, corny, bizarre and has hilarious lyrics.  “Ra, Ra, Rasputin, lover of the Russian Queen, There was a cat that really was gone; Ra, Ra, Raputin, Russia’s greatest love machine, it was a shame how he carried on”!  Don’t knock it until you have heard it – but be warned the tune will be playing round in your head all day!