Is Brexit not getting boring?  I think we all just wish they would get on with it…But I suspect after all the huffing and puffing we do not have politicians who have either the 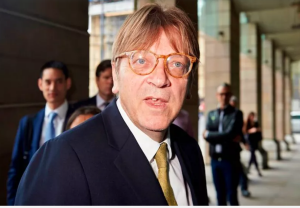 nerve, desire or courage to actually go through with it. (unlike the politician featured in todays chapter – see below).   If we did then we would end up with a reasonable deal, but I suspect that the EU are relying on our politicians being weak – and I fear they are right.   Although the EU are getting a wee bit nervous – which explains why Guy Verhofstadt warned about Brexiteers ending up on the guillotine (this after Donald Tusk said there was a special place in Hell reserved for them!).

Meanwhile the doom and gloom merchants were besides themselves with delight when figures were released which showed that the UK growth in the economy had slowed from 1.7% to 1.4%.   “It’s all the fault of Brexit’ they cried, whilst being strangely silent about Germany just avoiding a recession with 0% growth.

There are two observations which I have yet to hear any pro-EU politician actually argue – perhaps those of you who share their point of view could provide the answers?

Secondly has anyone noticed the contradictory position of the EU as regards the Northern Irish backstop.  They say it is in order to prevent a hard border and in order to maintain peace.  But if there is a no deal then that guarantees a hard border.  So why won’t they make the small compromise required to get a deal (a simple agreement stating that the backstop was not eternal and could be reviewed after five years would suffice)?  Could it be that peace is not their primary consideration, but rather control.  They want to use Northern Ireland as leverage to ensure that the UK will forever remain under EU rules.  This is typical of the callous cynicism of the EU elites.  But it will work – because in that respect our own political elites are no better.

This is a fascinating chapter which gave me a lot of information I did not know – not least that the EU planned Thatchers fall – and the Tory ‘men in grey suits’ were quite happy to do their bidding.

“I wanted to change the policies, not the leader.  But if that meant the leader had to go, then so it had to be.” Geoffrey Howe.

After her Bruges speech Prime Minister Thatcher had become the great obstacle to the European project and so she came under sustained attack – not least from the Euphiles in her own party.

Delors was desperate to get the Euro set up and a European bank.  For that to happen he had to get the Germans on board and especially the Bundesbank.   Much to most people’s surprise they did not block monetary union but merely insisted on certain conditions.  This was because Delors had rigged the committee and skillfully used flattery and persuasion.  He made them this incredible promise – which is directly relevant to today’s situation.

“There will be a new, Super- Bundesbank at European level, totally independent of governments and consequently able to exercise a degree of power beyond the wildest dreams of many heads of government.”

This week as Big Business and the Big Banks are stepping up the pressure on Brexit (and gleefully being cited as support by so called left-wingers, liberals and greens), remember that the current EU was set up by them and for them.

Nigel Lawson, the British Chancellor, tried to promote the ERM and ERU as an agreement between sovereign nations.  He failed to realise (until too late) that the EU’s central purpose was not co-operation but subordination.  This is a failing that most pro-EU UK politicians today refuse to acknowledge.

British Conservative politicans argued that we should go along with the first stage because we did not ‘want to miss the bus’ and we could ‘change from within’.  Sound familiar?!    Thatcher was the only one who really saw the danger and she stood firm.   Even when Lawson and Howe threatened to resign she stood firm.   And yet in Madrid she said that the UK would join the ERM (Exchange Rate Mechanism) but did not specify a date.

Meanwhile Lawson decided to shadow the Deutschmark, so interests rates in Britain soared to 16%.  He resigned.   The French Prime Minister Rocard warned “Britain is like a slow ship in a naval convoy.  Sometimes, for the good of all, the last vessel must be abandoned to its tragic destiny”

Meanwhile in November 1989 the Berlin wall fell.  Delors saw this as a great opportunity to promote a federal Europe – rather than a Europe of  independent nation states.   A single currency, a single economic policy and a single government.

In August 1990, Iraq invaded Kuwait.  And in October of the same year Thatcher reluctantly announced that Britain would after all join the ERM.    Delors by then did not want the UK to join – he just wanted rid of Thatcher.  Britain however joined (much to the delight of Labour, the Lib Dems, the trade Unions and the CBI) – only to be forced to a humiliating exit in 1992.

Delors saw an opportunity at the GATT talks (world trade) with 125 countries.  Britain which was still the worlds second largest trader at that point, did not have a seat at these talks.  We were represented by the EU.    The USA wanted a cut in agricultural subsidies.  The EU was totally against.    The EU Council then set a trap for Thatcher.  It refused to discuss GATT and instead focused on monetary union.  “Mrs Thatcher would be forced into the open; either she would agree, conceding game, set and match…..or, more likely, she would have to refuse, leaving the door open for a strike by her British opponents”

Thatcher then made this famous remark:

Whilst there were many things about Mrs Thatcher which I disliked and disagreed with when I watch this clip I realise that she was streets ahead in terms of leadership and courage than any of today’s leaders.  There is not a chance that Mrs T would have been pushed around as much as Mrs May or the ‘we must surrender all’ politicians have been.

Thatcher recognised – too late – that the EU was not about an open market and free trade – but was and is in fact a protectionist bloc.  The Sun summed up the whole situation with their “Up Yours Delors” headline.  And Howe resigned.   Heseltine stood against Thatcher in the leadership election and although he lost it was only by 204 votes to 185.  Thatcher resigned.   Heath rang his office shouting “rejoice, rejoice’ and bought his staff champagne.   But Heseltine did not become leader.  Thatcher was replaced by John Major who wanted the UK to be at the heart of Europe.  Given that the EU was about to move towards political and monetary union it was a forlorn hope.

The Great Deception 13 – In A Minority of One