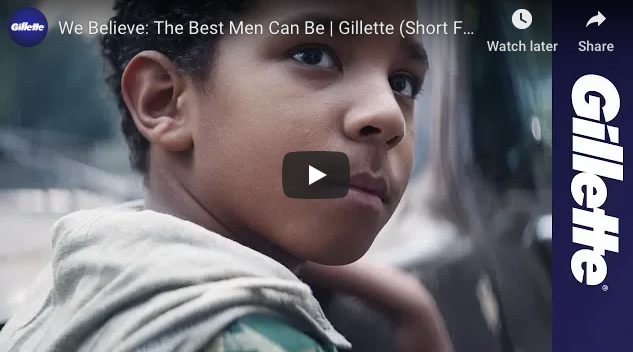 Are you old enough to remember this ad?

It’s now been changed into this video which was on all news bulletins yesterday and has been subject to a considerable amount of negative reaction (as well as those who love it).

When I heard about it I was prepared to hate it and get outraged….but in many ways I thought it was excellent.   There is a view of masculinity which is harmful and needs to be challenged.  I think that the advert does that well.  It’s far too easy to dismiss it as ‘woke’ advertising, virtue signalling and toxic anti-masculinity.

The themes of misogyny, bullying and sexual misconduct are serious and should not be lightly dismissed.  In fact they should not be dismissed at all.  Men are generally physically stronger than women, which is why the majority of physical abuse is done by men.  Men in most societies have more social, political and economic power.  That too is far too often used to abuse.

And that can be as true in the Church as in the rest of society.  In fact in the church it can sometimes be worse because the Bible is used to justify bad behaviour and attitudes.  We need to ensure that the name of God is not blasphemed amongst unbelievers because of the wrong way in which we behave, and the misuse of the Bible that is used to justify that.   So good for Gillette – but… (and you knew a ‘but’ had to be coming)…there are things that are deeply disturbing about this advert.

Firstly.  This is an advert for a product.  The earlier advert spoke about ‘the best a man can get‘, today’s speaks of ‘the best a man can be’ – as if a product, or a multi-national company can inspire or make us to be the best.  The commercialisation of morality and its use to make money is profoundly disturbing.  Are we really now taking our morality from the multi-nationals? Gillette are not being brave by their woke virtue signalling  – they have been granted millions of pounds worth of free advertising because the name Gillette was on every news presenters lips.  Controversy sells.  So does virtue signalling.

Secondly its hypocritical.  Gillette is owned by Proctor and Gamble, one of the major world corporations.  They are famous for their animal rights testing and their use of child labour.  They exploit people and then exploit our emotions in order to make money.  The fact that they are now exploiting the MeToo movement should not be a cause of celebration.  Greed is more of a problem in society than ‘toxic masculinity’.

The advert is also racist.  You will note that of the 43 bad examples of male behaviour, 42 are by white men and one black (where are the Asians and Arabs?) .  There are seven examples of good behaviour, five of whom are black and two are white.   Imagine if it was the other way round! The ad would be banned for racist stereotyping.  The unholy trinity of modern Western society is white, working class, and male.

Toxic Masculinity – Perhaps worst of all is that the worthy aim of the advert (as opposed to the aim of selling more products) is likely to be undermined by the underlying message it conveys.  The trend at the moment in Woke society is to claim that “toxic masculinity’ is really the major cause of all our woes.  To defeat the Patriarchy (aka The Handmaids Tale) we must emasculate men.  The American Psychological Association has just issued guidelines saying that traditional masculinity is harmful to men and that masculine traits such as ‘risk taking, competitiveness and stoicism’ should be dealt with.   The trouble is that a society which emasculates its men will end up being replaced by a society that doesn’t.   This does not mean that real men need to grow beards, paint themselves in woad and go out to fight. It does mean that we are to recognise and celebrate both masculinity and femininity. (Babylon Bee as so often caricatures the current craze to blame toxic masculinity)

In essence then I think the advert itself identifies a problem and suggests an outcome, but doesn’t tell us how we can get there.  Using Gillette blades and shaving off our beards is not going to make us ‘the best a man can be’.

At the end of the advert they give us this slogan –

I’m afraid that’s a motto and soundbite that is bound to disappoint.  Telling men to pull themselves up by their bootstraps and do their best will not work.  Indeed it’s a recipe for further depression and toxic masculinity.   And close is not close enough.  There is another way.  And that is the way of Christ.  Listen to this fascinating discussion

on Unbelievable  with Natalie Collins and Phil Moore.  I thought Natalie came across well and spoke with some power and reason – but overall she reflected far too much of the current zeitgeist.  Phil on the other hand was even more impressive.   His emphasis on Christ as the role model for men was deeply appreciated.  Of course Christ is also the role model for women.  The point is that none of us will be the ‘best we can be’ without Christ and the power of His Spirit.  If we ignore His Word (including what that Word says about humanity as male and female), or if we distort it (as religious misogynists or liberals do), then we will always be living with a distorted image.  So let me offer an alternative slogan –

Let’s see Gillette put that one in their next advert!

Quantum 24: China and the Dark Side of the Moon; The Yellow Vests; Trans; Soubry and Nazis; : Rahaf; Billy Connolly; The Iolaire