Have a look at this video which has been doing the rounds in some circles of American evangelicalism.  I was sent it by someone who meant well and I appreciate that.  I get sent so much that I don’t look at everything but I’m glad I looked at this.   I think its helpful because it helps us understand the perilous state of much of the church in the US (and to a lesser extent the UK) today.

There is a great deal here that will resonate with Bible believing Christians – because it sounds so right.  Which is what makes it such a dangerous prayer/video.  It is indicative of what’s wrong in so much of the evangelical church.

It’s a good thing to pray for the President.  We are commanded to pray for all those in political authority (1 Timothy 2:1).  It’s a good thing to recognise that President Trump is God’s servant –  but only in the sense of his office not because of who he is.   And that applies to all our political leaders (Romans 13:1-7).   But I very much doubt that Ruben Nika would be praying in the same way for President Obama or President Clinton.    There is a great hypocrisy in much of American evangelicalism.  Some Christian leaders were happy to publicly proclaim that President Clinton was unfit to be President because of his morality and sexual adultery.  Those same leaders are now prepared to argue that the President’s moral character does not matter. “we are choosing a political leader not a pastor”.

Using the ‘we’re all sinners’ card sounds humble, but when it is used to excuse the politicians we like whilst we condemn those we don’t,  it is hypocrisy.   Can you imagine John the Baptist praying for King Herod “Lord, He’s called to do your work.  He’s not a perfect man, none of us are, we are all sinners.”?!

2. Misusing the Bible to justify our politics rather than proclaim Christ. 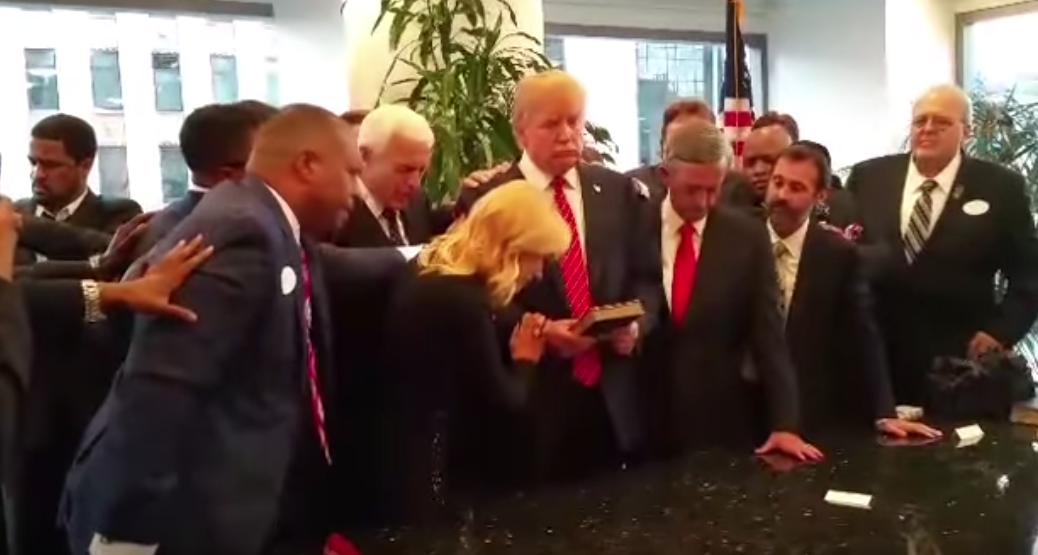 It’s good to pray according to the will of God.  It’s wrong to claim that our will is the will of God.   To portray President Trump as a leader in the ‘armies of heaven’, as fighting on the side of the Gospel is just a straightforward lie.   I don’t doubt that God can use President Trump, just as he used Cyrus, Pilate and Nero.  But we are not to put our trust in ‘princes’ and we are certainly not to proclaim a man who shows no evidence of Christian faith or practice, as some kind of Christian warrior.    It is quite frankly blasphemous to cite Isaiah 54:17 “no weapon formed against you shall prosper”, which is a promise to ‘the servants of the Lord’ as though it is for a President who does not profess nor follow Christ.

It is just as blasphemous to cite Ephesians 6:11-12 and to call upon ‘love to return to the land’ whilst in the same breath asking the Lord to smite down your enemies (the globalists, socialists, communists and liberals he prays about – although one has to wonder why the Republicans and Godless capitalists were left out of this list!).    Ephesians 6 tells us that “our struggle is NOT against flesh and blood, but against the rulers, against the authorities, against the powers of this dark world and against the spiritual forces of evil in the heavenly realms”.

When I watch a video like this I wonder if much of the Church has lost its mind!  Who can take seriously the following statements?

America is the last beacon of hope in the world – No it isn’t.  Not remotely.  America is a great nation but our hope is in Christ not in America.  The substitution of Christ for America is one of the great heresies of the US church. In terms of the Christian Gospel I would expect (and I could be wrong) Africa and Asia to be far more significant in the proclamation of the Gospel in the 21st Century (much as this may hurt American and European pride – I hope the Lord will allow us a part and not let our own hubris destroy us) .

Our President is under the worst assault we have ever seen.   People are starting to believe the lies pushed by the media.   Yes – President Trump is under attack.  Yes much of that is hypocritical and often unfair.  But that happens to almost every President.  This is not the worst attack.  As for lies – the President seems to have a very post-modern, self-absorbed relationship with the truth.  Christians can be thankful that God can use a liar and adulterer, but we should not put him up as a representative of the Christian faith or a warrior for Christ – nor should be endorse either implicitly or explicitly;  lying, adultery, pride or greed.

4) Proclaiming ourselves and not Christ

“Send this to three people who you know will say this prayer with you…lets get a massive unbroken prayer chain going to fight this relentless assault.  This is the battle  We need all Trump prayer warriors to come to the aid of our President right now. Let’s get this thing up to a million views…I know we can do it…”

The above illustrates the curse currently afflicting much of the church.  It’s about us…about our publicity.  What kind of weak and pathetic God does Reuben think we worship?  A God who needs a million views before he will answer prayer?  Is this ‘social media God’, desperate for likes and views, the God and Father of our Lord Jesus Christ? Or is Reuben just thinking about his own publicity/views/hits?  Look how effective my ministry is!

What is a Trump prayer warrior?  Did the first century church have Herod prayer warriors?  Nero prayer warriors?     The only type of prayer warrior that the New Testament knows are those who ‘pray in the Spirit on all occasions with all kinds of prayers and requests…who pray for all the Lord’s people and who pray especially that the mysteries of the Gospel would be fearlessly made known – not that President Trump would enact our political policies.

If the Church in the US is as this video portrays then it is a sick and dying church – shallow, superficial, ignorant, confused,  idolatrous and blasphemous.  Of course that is not the whole picture – there is much that is good in the US church – I benefit enormously from the ministry of people like Tim Keller, Matt Chandler, Ligon Duncan and many, many others.    But far too many Christians get caught up in this nonsense because they do not think ‘spiritually’ or biblically,  and instead allow politics to prevail over piety.

It’s not just theological liberalism that is a threat to the church;  biblical illiteracy and an irrational pre-occupation with contemporary culture wars are just as big a threat.  I loathe this type of Christianity – it makes me feel ill.  It’s like drinking from a cess pit.  Thankfully the purity of the Gospel of Jesus Christ is still untainted and those who go to the Scriptures prayerfully will know what it is to drink from the clear and pure water from the Fountain of Life.  The Church needs to repent first…..

(Note: In all the above I am not making a political point.  I am not saying whether Donald Trump should or should not be the President of the US.  Nor am I denying that God can use him, as he can anyone, or that the alternatives might be just as bad!  I am questioning the theology of a church culture which sees Mr Trump as a Christian warrior and thinks he deserves more ‘supportive’ prayer than Hilary Clinton!   The same applies to those ‘liberal’ Christians who think that the Gospel is equivalent to their politics – a plague on both your houses!  Nor am I making a nationalist point – the UK is no better than the US in this regard- our politicalisation of the faith often tends to be just as invidious, if a little more subtle!).