The final part of a four part review of a small but important book.

“At least five times the Faith has to all appearances gone to the dogs.  In each of these cases it was the dog that died.”  G K Chesterton

“Sometimes I think it is already too late.  At any rate, if by the mercy of God we are to have some further breathing space, if He goes grant us another chance to build up a new European civilization on the ruins of the old, facing all the possibility of an imminent end to all civilised life on this globe, Christianity has a tremendous responsibility” Emile Brunner

Tinker begins his final chapter with these two great quotes.  And then goes on to point out that whilst humanity always seek to bring God down, it is God who brings down the rulers and authorities and principalities.  In the Church we are not to adopt the methods of Babel – the latest marketing techniques and church growth indicators.  But neither are we to retreat into a nice sounding pietism – where we are doctrinally sound but culturally irrelevant.     Our hope in renewal is grounded in God, not in ourselves.

We are to commend God’s Truth, culturally engage and courageously refuse and refute.

In terms of the Truth we are to proclaim the One who IS the Truth – Jesus Christ – in his full divinity and humanity.   One of the side effects of the confusion about gender and humanity is confusion about the person and work of Christ.   We don’t negotiate Jesus and we don’t make up our own personal Jesus to suit the culture.

We need to have a cognitive and cultural resistance – but that can lead to an isolation from the culture where we think we are safe – but in reality the air that we breath infects us all.

On the other hand there is seduction of the church by culture – Tinker identifies four steps in this.  Assumption (it is assumed that a current cultural value is better than a biblical one; abandonment (leave whatever in the bible does not fit); adaptation (adapt the church to the prevailing culture) and assimilation (where the world just assimilates the church.  The tower of Babel is being built, the secularist are the architects and some church leaders and their advisors are the artisans.

Over ten years ago when the whole SSM and homosexuality debate began in the C of S I got in enormous trouble and ‘hurt’ people for saying that the evangelicals were being suckered by the Establishment. The response was that this was a battle that they would win, that two evangelicals had been invited on to the panel to investigate the matter that an evangelical was going to become Moderator etc. But they were suckered. Big time. The evangelicals were never allowed to outnumber the liberals. The only reason they were invited on to these groups was to enable them to keep their fellow evangelicals in line. They were invited to the table but they were not allowed any say in the menu. They were outmanouvered every time by fine words, appeals to unity (and to pride), threats and empty promises of jam tomorrow. I have to say that from a liberal perspective it was a brilliant strategy that largely worked – mainly because the evangelicals were leaderless, clueless and blinded by a myopic fixation with what they hoped the Church of Scotland could be, not what it really is – (as well as a genuine concern for their own congregations). Most evangelicals stayed in, but not to fight. Now they have been reassimilated into the Establishment to such a degree that they are completely toothless.

Tinker suggests that what we need is cognitive and cultural negotiation where we hold fast to the faith once delivered, but we are flexible in how that is expressed….becoming all things to all men.

Citing C S Lewis’s essay “Christian Apologetics Today” he points out that we need to be courageously different from the culture – where the Gospel demands it.   Theological liberalism which accommodates the culture results in these liberal churches declining. 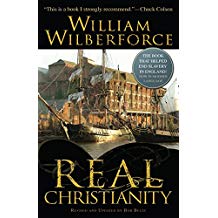 This calls for joyful endurance and courageous refutation.    A great example of which was William Wilberforce, who knew that the only hope for the country depends on those who ‘in this degenerate age, love and obey the Gospel of Christ.”   He summarises Wilberforce’s apologetic work Real Christianity..

“Wilberforce used both hands, the right hand of proclaiming the gospel, and the left hand of refuting present day ideas and values, using all the means at his disposal to effect change.  This took great courage.”

“Spinelessness has long been the mark of the true Evangelical, and we must expect that it will be just as much in evidence this time around as it has been in the past.”  Gerald Bray

Martin Luther King speaking of those church ministers who refused to speak out against the Vietnam war said:  “there is a time when silence is betrayal”.   We need to preach up and speak out.

Another author cited is James Davison Hunter who contends that the church should be less concerned about ceasing power through political means and instead should seek to be ‘faithfully present’.

We need faithful Christian communities that are a praying people, a literate leadership (biblically and culturally) and a changed community.

“If pastors do not know the culture in which the people live, move and have their being, they will not be able to minister to them effectively.  And if this doesn’t happen then there will be a disconnect between what is preached on Sunday and what is encountered on Monday”  Kevin Vanhoozer

That Hideous Strength small though it is, is my book of the year.   I would highly recommend it to every Christian and certainly every Christian leader should read and know it.  As David Wells says it is “a very brave, fine book written with keen insight”.

I leave you with this quote from Os Guinness:

“The time has come to trust God, move out, sharing and demonstrating the good news, following his call and living out our callings in every area of our lives, and then leave the outcome to him”

What a great rallying cry  for the church as we enter 2019 in the midst of a confused and increasingly dark culture!