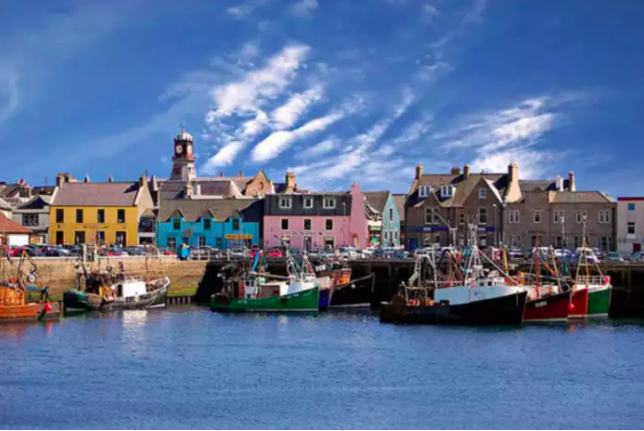 This is a version of a piece I wrote earlier today re the proposed Inverness and Stornoway Pride marches. unfortunately both were hacked – this is a rewritten, restored version which I hope is as near to the original as I can remember. I normally have a back up but for some reason didn’t with this one!  Apologies to those who posted comments on the deleted article…free free to do the same with this one – I have stepped up security!)

Inverness is to join in the cultural zeitgeist and have its own Pride parade….and even Stornoway is to join in – although I suspect the latter will be a wee gathering rather than a parade!

Donald J Morrison, the evangelist with the Free Church (Continuing), has started a petition asking for the Inverness Pride to be banned.  Here he is being interviewed by Moray Firth Radio explaining what this petition is about.

The subsequent publicity in the local and national press has not really been good.  It sets up a binary choice  – you are either for freedom, love, tolerance or you are intolerant, ignorant and hate filled.

On the one hand we have the approach of Donald Morrison (petitions and seeking to get it banned) or that of the Church of Scotland minister Rev Scott Burton in supporting Perth Pride .  I suspect most Christians will want to adopt a third approach – keep quiet and hope it goes away!    Can I suggest yet another one…

I will not be signing this petition – I think it is unwise, unhelpful, unbiblical and indeed only assists the agenda of those who seek to attack and demonise Christianity.  Donald Morrison means well (and incidentally comes across as a bold and compassionate if somewhat unwise brother),  but well-meaning isn’t enough….we are to be as wise as serpents and harmless as doves.

The petition is unbiblical because of its methodology.   Can you imagine for a minute the Apostle Paul and his companions marching down the streets of Corinth, Athens and Rome with banners declaring ‘down with that sort of thing!”.  The early Christians were strongly opposed to the sexual immorality of the Greco/Roman/Pagan world – and they did not hesitate to proclaim Christ’s standards and to insist that Christians lived a counter cultural lifestyle.  But they did not use political protest to try to get their way.    I accept that in a country which at least has a nominal Christian tradition it may well be right for such actions to be taken, but Donald is completely out of touch with what is happening in our culture today.  We are now post-Christian and post-Christendom.  Appealing to the Christian values of Highland Council, the Scottish Government or the UK Parliament today is about as useful as appealing to the Christian values of Caesar would have been in Paul’s day!

It is unwise because it just gives ammunition to those who would seek to undermine and mock Christianity.     Why petition about this one thing and not about the exploitation of workers who are not paid a fair wage?  Or the danger of internet pornography on our children?  Or the effects of adultery and divorce on families?  Or the greed of those corporate capitalists who exploit and abuse not only the poor but the environment? Or the abuse of women?  Or the lies and deceit of so many in our political system?  It seems to me that we are just joining in with the agenda of the world.   Of course, as anyone who reads this blog will know, I believe that we have to challenge the dominant sexual philosophy and immorality of our cultural elites – but that does not mean that we have to do so in their terms and in a way which just adds fuel to their narrative.

Donald is right to point out that often on the larger Pride events there are gross displays of public immorality.   I find much of what goes on at the bigger Pride events repulsive and disgusting.  But it is unwise to imply that this is something that happens at every such event or that every gay person is responsible for –  I doubt very much whether this will be the case in Inverness or Stornoway.

There is also a fundamental inconsistency in the case put forward by Mr Morrison.  On the one hand he says that he speaks on behalf of ‘bible believing born again Christians’, on the other he ’emphasises that this is not a Christian petition’.  Why?  This implies that he is just allying with any homophobic group.  If it is not a Christian petition, why profess Christian reasons?  The trouble is that such an approach gives a distorted view of the Gospel – as being primarily moralistic or indeed anti-homosexual.

The inevitable has happened.  Mr Morrison’s petition has invited and received ridicule and scorn and whilst some Christians undoubtedly support and agree with both the message and the methodology, others are just embarrassed and hope the whole thing will go away.   That is true of my denomination, the Free Church of Scotland.

Mr Morrison is frequently described as a Free Church evangelist and so we carry the can for what he says and does.  This has resulted in the past week in a storm of abuse on social media and in the comments sections of the print media.   Several politicians commented including one MSP who said that is was one of the worst examples of hate speech he had come across (I sometimes wonder if these politicians live in some kind of surreal parallel universe!?).  When I challenged him on it (pointing out that Mr Morrison was not Free Church), he withdrew the accusation and apologised.

But the damage has already been done in other areas and sadly the Free Church PR machine (such as it is) prefers the ‘lets bury our head in the sand’ and hope it goes away approach.   To me it is fairly obvious that when someone is being portrayed as a Free Church evangelist we should simply point out that they are not and ask for the mistake to be rectified.  Why did we not do so immediately?  Because those who are our PR advisors apparently think that that even such a simple step is somehow unwise. Why? we appear to be scared  that we will then be asked ‘what then is your view of PrideNess or Stornoway Pride?’.

It seems to me that this indicates a weakness, not only within the Free Church but the wider evangelical church. Because we don’t want to be associated with either the message or more likely the crude methodology of some, nor the anti Christian ‘Pride’ message – we just keep quiet.    There is undoubtedly a time to keep quiet – but not when your name is being splashed all over social, broadcast and printed media.    So what if we are asked ‘what is the Free Church’s position on the Pride events?’   Why can’t we answer?   Why would we not want to answer?

Here is my answer (I realise that I don’t speak for the Free Church so this would be my own).

“As a Christian church we really don’t regard pride as a virtue – there is a lot to be said for humility.   We don’t agree with the somewhat confused and simplistic message of these Pride marches.  However we recognise that people have a right to march for their cause and to express their views.    We don’t support the march, but neither will we be organising a counter march.     We hope however that, at a time of council cuts and shortages,  public money will not be spent on funding and helping promote one view.   If the Council were to fund this march then surely they would be duty bound in the name of love, equality, diversity and tolerance to fund a Christian Humility march?!    We also reject the simplistic narrative that those who are opposed to these marches are necessarily homophobic.  There are some gay activists who have come to deplore the commercialisation and corporate sponsorship of many of these events.

We would hope in a pluralistic society that we would be given the freedom and opportunity to express our view that the traditional Christian view of sex, sexuality and family is the best for our culture and to be allowed to question the sexual philosophy of our cultural elites, which, in our view, is wreaking havoc in our communities. We remind people that the rainbow is a Christian symbol speaking of a covenant keeping God who lovingly warns us of the consequences of turning away from his ways and who delights to show mercy. We would also like to point to the need of all of us to repent and seek the face of God.   The Pride marchers talk about Love…we follow the One who is Love and would want all, whatever their sexuality, to know Him.”

Donald said in his interview that he did NOT want to use this issue as a platform.  I am completely the opposite.  I think we should use every issue as a platform to tell people about Jesus.  So here is my suggestion for what the churches in Inverness and Stornoway should do.

Pray – that God would have mercy on our communities and return us to his word.   We should petition the throne of grace – not Highland Regional Council.

Persuade –  when we get the opportunities on media (and it’s not an obvious set up) then yes let’s take them.  But I mean we need to present a more persuasive case.  In the words of Glynn Harrison’s superb book – to Tell a Better Story.   And instead of protesting on the streets why don’t our churches open their doors and provide the LGBT marchers with a cup of tea (and a Gospel or even a free copy of Gay Girl, Good God!) and offer to pray with them.  Dialogue sometimes works wonders.  Prayer works miracles. Giving a cup of tea is not giving an endorsement to their godless ideology.

Proclaim – We should always seek to proclaim the glories and beauty of Christ.   Salvation is not found in becoming heterosexual!  Our identity is to be in Christ, not our sexuality.  But people won’t believe in Christ until they hear about him.  That is our priority – not seeking to prevent the foolishness of human sinfulness being displayed on our streets.

3 reasons why the commercialisation of sexual politics is wrong