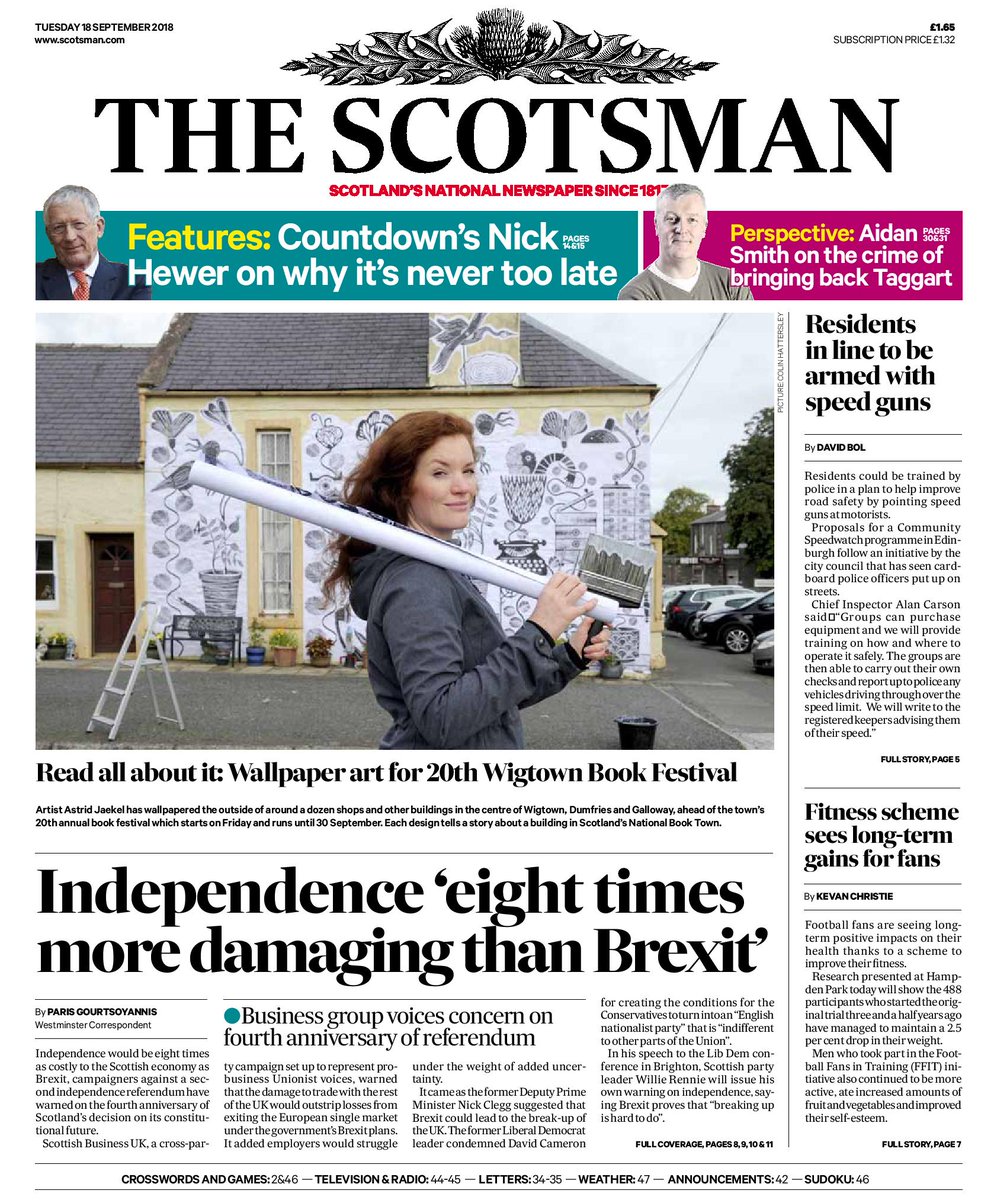 Four years ago I wrote this on the day we voted to see whether Scotland would become an Independent country.

The deed is done. I voted. And for the first time in decades I feel that my vote actually counts and matters. Democracy has returned to Scotland. Nobody died. There were no riots. No-one invaded. There were no bombs. And my vote matters. I am elated. (oh and my 16 year old daughter Emma Jane got to vote as well – I think that has been one of the good things about this referendum – it is her future!).

My prediction – 55% No – 45% Yes. Why? Despite an incredibly successful campaign which panicked the Westminster Establishment into making lots of promises there are three main reasons. Firstly there are many people who love Scotland and who believe it is better that we are in the United Kingdom. I hope they are right, I fear they are not, but I respect and honour them. Secondly there are many others who just do not know, would like to be independent, but their fears will turn them away. On an issue of such importance when people go into the polling booths the inherent tendency is to go for what you think you know. When you are handed a leaflet saying vote No to save the NHS, your job, schools etc it will impact you. It is a very emotional argument. Thirdly virtually all the media have been opposed to Independence – from the slight bias of the BBC to the disgusting bias of the Daily Mail (comparing Salmond to Hitler), the media and political establishments are united against Scotland governing itself. Let me add one caveat. It is possible that the pollsters and pundits have got it all wrong and that they have not taken into account the mass movement that this has become. Although even if  this has become 500,000 people that is only 10% of the population. So I think my prediction will stand.

I am a Calvinist. And I sleep like one. So I will go to bed tonight with a wee dram to celebrate my vote for democracy, knowing that when I wake up in the morning I will come down and hear the result. And then the real work begins (or more accurately continues).

By that I don’t mean that lovely sign in front of the Scottish Parliament just now which declares ‘The Beginning is Nigh’! Even though in my view many Scottish people have got a taste for democracy and after a No vote, some will disengage disillusioned, but others will continue and I can see Independence coming in ten years – unless there really is a reformation in Westminster. No what I mean is that the work of communicating the Good News to the people of Scotland, England, Ireland and Wales needs kickstarted again. That is what I am committed to. That is why I will head to Edinburgh Theological Seminary tomorrow to teach on church based persuasive evangelism, and then on Saturday speak at the Reason Conference in East Kilbride, and then on Sunday welcome Dundee University CU Freshers crawl to St Peters. The work goes on – whatever the political system. May God give myself and all His people, strength to continue that battle until the end. And may He grant the grace and mercy so that we may see revival and renewal of the Kingdom in all the kingdoms of these islands (whether United or not!).

I remember it being a grey day after the result was announced and feeling quite sad that the opportunity of a lifetime had been missed, as I headed into Edinburgh on the train.

The prediction I got wrong was in thinking that Independence would come in ten years.  I could not foresee that the influx of people into the SNP would change it so dramatically so that it is no longer the party of Scottish Independence, but has instead become the party of the EU and the self-styled ‘Progressives’.  Of course they still claim to be about Independence but that is a meaningless post-modern claim.  They now want another referendum (which they will never deliver) in order to keep Scotland tied to the EU.

Being tied to a superior court, an unelected bureaucracy that overrides most of your national laws and a centralised economic system that pays for your institutions but then uses them to govern you, is not in any meaningful sense, Independence.  The SNP have, despite their protestations, killed of any real hope of Scottish Independence – one third of SNP voters actually voted for Brexit and many of us don’t see the point of voting to leave one dominating union to join an even larger and more undemocratic one.  There is no chance of another independence referendum being held in the near future because the SNP know that they cannot win it.  They dangle the carrot to motivate their supporters, but the promise is an illusion. To their shame the SNP are now using exactly the same Project Fear arguments against the UK leaving the EU as the Unionists used against Scotland leaving the UK.  The only difference being that the economic arguments against leaving the UK were far stronger than the economic ones against leaving the EU – as todays Scotsman points out.  (I would still have done it – sometimes Independence comes at a price).

If that was to have been our future then I’m glad that things worked out the way they did.   I suspect we dodged a bullet.  Although, to be honest, the way things are going, I’m not sure Mrs May and her government will make things any better (or indeed any of the alternatives).   I predicted that for many people in the housing estates around Scotland who for once got excited about politics – there would come crushing disappointment and disillusionment.  I did not foresee that happening to me.  But it has.  Four years on and I believe that whether in Holyrood or Westminster we are governed by leaders who really don’t seem to know what they are doing.

But as I believed and stated in 2014, our hope is not in kings and those in political power – but in the Good News of Jesus Christ.  Now, as then, my commitment is to spreading that and proclaiming his word – whatever the political system we are under.

Whatever your political views lets pray the prayer of Psalm 67.

God be merciful and bless us;

shine upon us with your face,

that the earth may know your actions

The End of the United Kingdom?