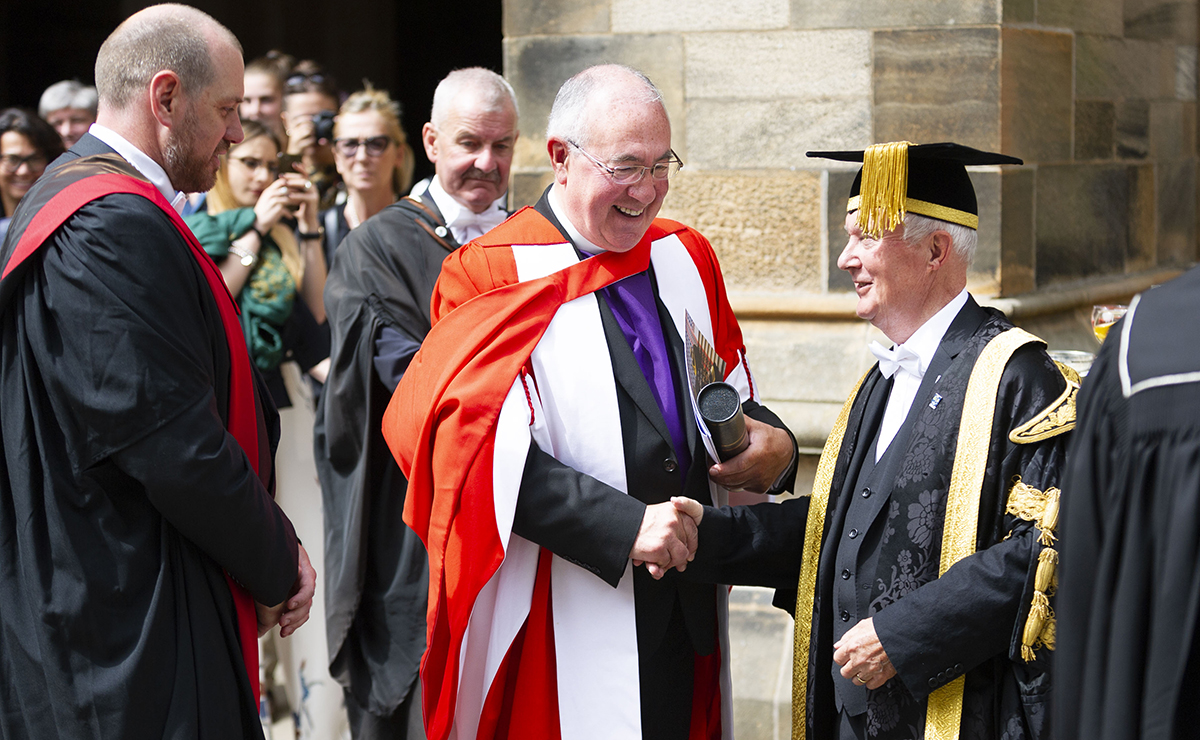 As my twice weekly column with Christian Today has come to an end and as the readership of this blog continues to grow, I have been thinking and praying about what to do with it.  I have tended to write quite lengthy posts which people say won’t be read – but many of them are – as in these two this week – Undivided – An Open Letter to Vicky Beeching

However, whilst I will continue to write occasional longer posts, my intention is to continue to provide something every day – but to make most of them shorter snippets, that help keep people informed, promote discussion (and harmony), challenge and call to prayer.   Today I begin with something that is profoundly depressing – the honorary doctorate from the University of Glasgow  awarded to Rev Dr Angus Morrison, former FP minister and former moderator of the Church of Scotland.  This was presented at a ceremony on Tuesday 26th June. 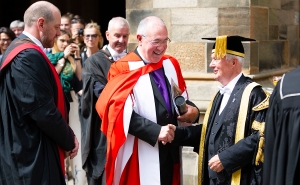 Why is this depressing?  I don’t doubt that he deserves it  – he is an intelligent and pleasant man who has done good work – including championing Gaelic and refugees.  The trouble is the third item he was honoured for.

I’ll let you into a wee secret. When the Scott Rennie debacle unfolded in the Church of Scotland I was visited by a couple of evangelicals in the C of S who in no uncertain terms told me that I should keep quiet, because they had a plan to prevent this happening – part of which involved getting two of them on to the committee who were to investigate this.  I was also told that Angus was likely to become moderator and then we would have ‘one of our own’ in the main seat.   I was castigated by many when I expressed publicly my fear that this was a classic case of being invited inside the tent – or to put it another way – getting a seat at the table, but not being allowed any say in the menu. “Do you really think a former  Free Presbyterian minister, member of the Crieff fellowship, strong evangelical Reformed theologian, is not going to use his influence to ensure this doesn’t happen?”

I wrote this analysis of that tactic two years ago….

The Evangelical tactic of infiltration and influence failed – spectacularly. I was blasted and accused of being mean because I said that the purpose of all the discussions and delays, of the mixed economy’ idea was simply to keep the evangelicals on board. That was confirmed in a chilling bout of openness when the incoming moderator, thanked the outgoing moderator, Angus Morrison. He thanked him for the job he had done and stated that given his standing within evangelicalism and the Highlands it was important that he had stood out against schism – “It was for this message, for this year that God prepared you to be our moderator.” As I feared Angus was not there to be the evangelical voice into the establishment – he was there to be the establishment voice to the evangelicals. And it largely worked. The Establishment was exultant. They even had a PowerPoint slide displayed which boasted only 25 ministers had left over this – that 97% had stayed. Angus was thanked for having done his job.    From A Rubicon has been Crossed

Angus is a lovely and genial man and therefore was the perfect tool for delivering what the liberals in the C of S wanted – the gay agenda to be accepted and most of the evangelicals kept on board.  His influence was not only ineffective in preventing the seemingly inevitable, but in reality it was a negative influence which promoted the anti-biblical stance.  (This was seen not just in the sexuality issue but also with the Scott McKenna debate and the attempt to cover up Scott’s heresies)  I would have loved to have been wrong – and to be writing this as an apology for not seeing the brilliant masterstroke that Rev. John McPake and Angus had pulled off.  It grieves me more than I can say that things were even worse than I suggested.  Angus and the ‘tame evangelicals’ (let us ‘influence from inside) were the Trojan horse that has sealed the C of S’s fate.

Glasgow University told us why this was awarded: “”his contribution to championing Gaelic, refugee and asylum seekers and changing attitudes within the Church to same sex relationships.”

There you have it.  The great hope of the evangelicals for upholding the biblical position is ten years later honoured for changing attitudes within the church and championing the gay agenda!

And as I already hear the cries of ‘that’s not nice’ – I think back to the battles within the Assembly, the C of S woman sitting beside me in tears at what her church was doing, the cruel and vindictive pursuit of those who dared to challenge and leave the church (evicting from manses and buildings and seeking to trash their names), the mocking abuse of those who upheld the biblical position (and who Angus was supposed to be representing), the churches destroyed, the ministries broken,  and the acceptance of SSM by the Scottish parliament (partially due to the inability of the C of S, unlike the Catholics, to stand up for the Christian position);  and I ask – was all this worth an honorary doctorate?

Back to the Future – the 2009 General Assembly

Footnote:  Within hours of publishing this I was accused by a C of S evangelical minister of ‘bearing false witness’.  I’m not sure why.  Everything in the above post is true.  It says a great deal a minister can be outraged at someone pointing out the obvious, and stay silent about the fact that the man they put into influence the church to stay on the biblical path- ends up being honoured for doing precisely the opposite!