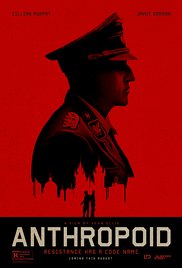 I havn’t heard a great deal about this film – nor seen many adverts.  But thanks to the DCA we got to see it.  All I can say is that it is one of the most stunning and intense films I have ever seen.

Directed by Sean Ellis it tells the story of the assassination of Reinhard Heydrich in Prague in 1942.  I love the camera work (lots of handheld), the portrayal of Prague and above all the performance by all the actors.  Cillian Murphy and Jaimie Dornan deserve oscars!

There are those who might think it is a bit slow, but I found it all incredibly believable and so easy to get caught up in.  Perhaps the final battle was overlong – although it is amazing to think that the handful of Czechs and Slovaks held off the Nazis for over six hours – but there is nothing in this film to dislike.  Or let me phrase it another way – there is everything to dislike – because it is a realistic portrayal of a profoundly evil time in human history.

There are real difficult moral problems in the film which have no easy solution.  Should the partizans have killed Heydrich, knowing that someone would take his place and that thousands of their fellow citizens would be killed?    Why is there always a Judas?  And above all, how can human beings be so cruel?  Having said that, the incredible bravery of those few who knew that they would almost certainly lose their lives and yet believed enough in their cause to continue, is to be admired.

There is one short scene where I audibly said ‘Amen’!  The priest in the cathedral, in assisting the partizans, answers a question along the lines of is it all worth it – and what does it mean?  His answer is yes because he believes in a final judgement where God will give the Nazis their just desserts.   I wonder how those who think that after you are dead you are at ‘peace’, that there is no judgement, and that we are just chemicals who return to chemicals, can actually cope?  As Dawkins says, in the universe there is ultimately no good, no evil, no justice….Watching this film, if you have that worldview  it will drive you to despair.  If you have a Christian worldview, you will be shattered but not hopeless.

Go and see this film.  But remember it is not an easy nights entertainment!

Don’t Disrespect People – Unless they are Christians – What Captain Fantastic tells us about Western Culture today.