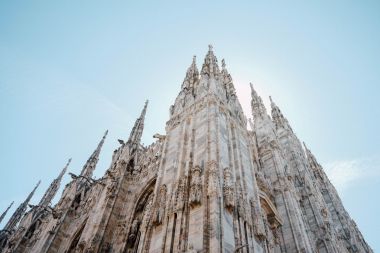 My latest column in the Revelation series on Christian Today has already caused a furore and a storm of abuse and outrage from ‘Christians’ who accuse me of not loving or bringing the teaching of Jesus.  Ironically in so doing they prove the point of the article, that much of the Christian church has become hopelessly compromised and confused.  You can read the original column Here

The following is an expanded version:

We shall overcome is the well known protest anthem associated with Pete Seeger and the Civil Rights movement. What most people don’t know is that it was originally a hymn by the Rev Charles Albert Tindley, a minister of the African Methodist Episcopal Church in Philadelphia. It is a great oneline summary of the message of Revelation, and a timely word for the Church in the West today.

Because we are in deep trouble. Just as he did with the church in Pergamum (Revelation 2:12-17) Jesus does ‘have a few things against us’.   With the State replacing God as the source of our morality in our society, and with the materialistic and power idols of our culture being combined with an increasing sexual confusion and immorality, there is an enormous temptation for us to compromise on what the word of God says. The governing elites of our culture tell us what the new morality is and the church so often just meekly follows along – ‘discovering’ that the bible didn’t really mean what it said, that there are a variety of interpretations and that we show ‘the love of Christ’ by going along with the new morality of the culture.

This is especially seen in the current troubles besetting the church about the issue of sexuality. Our society is now telling us that sexuality and gender are ‘fluid’. Marriage is being ‘redefined’ and anyone who does not go along with this is regressive, ‘on the wrong side of history’, and cruel. Those in the church who buy into the new morality are warmly applauded. The Archbishop of Wales, Barry Morgan, is the latest example of a clergyman http://www.telegraph.co.uk/news/2016/09/14/archbishop-nothing-improper-about-gay-sex/ who comes out with the teaching that the Bible is unclear, there are numerous interpretations, although his liberal one (which nicely coincides with the culture) is of course the correct one.

Those who don’t buy into this are mocked, derided and abused. And even reported to the police. When ‘Cranmer’ wrote a blog which critiqued an article by Vicky Beeching in The Guardian, but did not personally attack her, another ‘evangelical’ Jayne Ozanne reported him to the police for ‘hate speech’! http://www.christiantoday.com/article/vicky.beeching.jayne.ozanne.and.archbishop.cranmer.what.happens.when.argument.turns.toxic/95217.htm

Recently in a Scottish border town the South African charismatic preacher, Angus Buchan was invited to speak at an evangelical charismatic church. I don’t think that Mr. Buchan is my sort of preacher and I disagree strongly with some of his views, but surely the mark of a mature democracy is that you allow the expression of views that you find distasteful? If freedom of expression only means that those who agree with you (or the current zeitgeist) are able to express their views then that hardly constitutes ‘freedom of expression’!  Once the social media mob got hold of this the media outrage followed, the militant secularists called for blood and local politicians sought to ban this ‘outrageous’ preacher? Not only did the local council give in, sadly so did the church, apologizing for any ‘hurt’ they caused and seeking to ‘engage in dialogue’ with the local LGBT ‘community’. And suddenly the pastor was being described as ‘a very nice man’ by the militant secularists. (My rule of thumb? – if militant fundamentalist secularists are calling you very nice, it’s a fair indication you’ve got something wrong!).

This is how intimidation works in today’s culture. If a Christian teacher refuses to teach what is contrary to their faith, they are portrayed as a narrow minded bigot and the dogs of war are unleashed. They would do well to keep their job.  On the other hand a Christian head teacher is lauded for handing out books about lesbianism to primary school children and feels good about ‘showing the love of Christ’.   A Stonewall diversity award will doubtless soon be winging its way.   Christian leaders, especially those who are ‘evangelical’ are kept out of the media if they hold to the same view of marriage Jesus did, but let them announce they have changed their minds and suddenly all manner of media doors are open for them.   Those who were formerly ‘narrow’ and ‘bigoted’ have morphed into ‘courageous’ and ‘brave’ leaders.  They are the acceptable face of Christianity for the modern world.

This is nothing new.

It was tough being a Christian in Pergamum (Revelation 2:12-17).   It was a major city which claimed to be the first city of Asia, vying with Ephesus and Smyrna in much the same way as Manchester, Liverpool and York might vie to be the premier Northern English city. It had a massive library of 200,000 volumes and was the centre of the religious life of the province. There was a huge hill that rose to 1000 feet above sea level and had many temples. It had the temple of Asclepios the God of healing closely associated with the snake; a temple of Zeus and most importantly the first temple in the area dedicated to Augustus and Rome. This latter made it the centre for emperor worship in the province. The Romans were smart that way. They didn’t need people to give up their local ‘gods’ (who didn’t exist and therefore could not be a threat), all they needed to do was ensure that they included the Emperor (who did exist and was an ever present threat) as a ‘god’.  The titles of Lord, saviour and God were constantly applied to the Emperor. No Christian would ever give those titles to anyone other than Christ.

It is little wonder that Jesus describes Pergamum as the place where Satan has his throne – an especially bold statement given the identification of the throne with the Roman emperor and (for the Greeks) with the throne of Zeus. Just being a Christian meant that the political, religious and cultural authorities were being challenged.
And that challenge was met with a vicious response. The Christian Antipas was killed. . This is the first occasion of the Greek word for witness being used of one who laid down his life on account of witness to Christ.

So you would imagine the story would be…”well done you faithful Christians. You have endured even unto death.” But the realism of the Bible again shines through. Even in the most faithful churches there can be real problems.   Jesus had a few things against them….and just as he spoke to Pergamum so he speaks to his church in the West today.

The Church was able to resist the 14-year-old Emperor cult, but they seem to have given in to the attacks from within. Satan not only persecutes, he seduces.   The church had some people who held to the teaching of the Nicolatians. They were followers of Nicolaus (no –not St Nicolaus, otherwise known as Santa!) who taught, like Balaam in the Old Testament, that idolatry and sexual immorality were ok.  These were the characteristic features of the Greco/Roman pagan society. Features which the Nicolatians went along with doubtless thinking that they were showing ‘the love of Christ’. But this was not showing the love of Christ, it was affirming the hatred of the world for God. It was a denial of Christ and complicity with the evil that destroys the world.

As Bauckham points out: “Clearly a church which listens to the Nicolatians or imitates Babylon cannot bear faithful witness to the truth and righteousness of God.   The churches must be exposed to the divine truth in the Spirit’s words of prophecy, if they are to be lampstands from which the seven Spirits can shine the light of truth into the world”

Today Christians who are compromising on the teaching of Christ, at just the point where the world is attacking it, are following the way of Balaam and the Nicolatians.   Meanwhile those who don’t compromise and don’t give in to the pressure can feel increasingly under siege.   It is vital that such don’t develop a siege mentality. We do this by remembering who it is we follow and who is ultimately the victor. The whole book of Revelation is focused on the conquering Christ. Ironically Nicolaus means ‘conquer the world’. The devil was seeking to conquer the world not so much by persecution but by seducing the Church.
Jesus’s word is not confused. It does not depend on senior clerics letting us know how it ought to be revised in order to fit into their worldview. If Christ has anything against the Church in the West today it must be the way that so much of it has usurped the role of the Holy Spirit and created a new religion, complete with their own personal, comfortable, harmless Jesus, and our own confused, inane ‘word’. He calls us, His Church to repent of tolerating such confused and poisonous teaching. To turn back. Not to follow their way. He says, stick to my way and I will give you the hidden manna and the white stone. What are these? William Still suggests “the hidden manna is undoubtedly the secret bread of the word of God which sustains afflicted servants of God in their day of trouble until their enemies marvel at their steadfastness and strength.” The confused mess of modern ‘liberal scholarship’ is a dish that poisons and destroys, not the manna that builds up.

The white stone was a ticket and a symbol of admission to the heavenly banquet. It’s our party ticket!  It’s a new name, indicating a new identity and the name of Christ. It’s on stone which means it’s durable and lasts forever.

Christ is telling us that those who go along with the Zeitgeist, those who compromise his word in a culture which hates it, will have their 15 minutes of fame but, in the words of Newton’s hymn, ‘solid joys and lasting treasure, none but Zion’s children know’.  Maybe its time for the Church to wake up, strengthen what remains and is about to die. Whoever has ears; let them hear what the Spirit says to the churches.