Letter from Australia 115 – A Prince in Israel has Fallen – An appreciation of the ministry of Rev Eric Alexander – and his final words in public.

When the Queen died, I felt that it marked the end of an era for the United Kingdom.  This weekend I heard of the death of a church leader whose passing for me marks the end of an era for the Church in Scotland.  Rev. Eric Alexander was one of the greatest preachers and men of God I have ever known.  He was a ‘prince in Israel’ and we mourn his passing (2 Samuel 2:38).

It is possible that some of you may not know who Eric Alexander is, or why he has been so significant in the life of the Church.  You are not alone.   For a while he and his wife Greta, lived in retirement in St Andrews.  I once suggested to the CU exec that they should have him preach – and they didn’t know who he was.  ‘Only the greatest living preacher in the English language!’ was my astounded response.  There grew up a generation that knew not Joseph!

In 1962, after studying at the University of Glasgow Mr Alexander (he always said to me to call him Eric, but I couldn’t bring myself to do so!) went to be the minister at Newmilns in Ayrshire.  In 1977 he went to the Tron in Glasgow and served there until 1997.   His ministry there was wonderfully blessed.  As an East coast boy there were only two things that would draw me to visit Glasgow – Ibrox and going to the Tron to hear Mr Alexander.   He also preached throughout the English-speaking world. 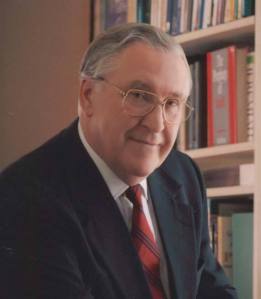 He was such a powerful speaker and wise.   As a precocious teenager I remember being at the Strathpeffer convention in the Scottish Highlands (in those days attended by 1,000 people).  The speaker who was sharing the platform with him was a well-known and highly respected evangelical leader – but I was astonished to hear that speaker say, “God held his breath while he waited to see if Abraham would make the right choice”.  I wasn’t a Calvinist at the time.  I didn’t even know what a Calvinist was!   But I knew that that was not biblical and did not make sense.  In those days I was fearless, so I approached Mr Alexander and asked him if it was wrong and what was he going to do about it?  He told me it was wrong and to watch this space!  The following evening, he preached a wonderful sermon on predestination and the sovereignty of God – and yet did so in such a gracious way that it was clear he was not having a go at his colleague.  I learned the first of many important lessons from him that night!   He gave me great advice – some of which (such as how to work with Americans) I wish I had heeded more!

Not long after arriving in St Peters, Dundee, I was standing at the door welcoming the handful of people who were attending at Christmas, when who should come in but Mr Alexander.  I was mortified!  I told him that it was a custom in the Free Church when a visiting minister came to have him do the sermon. He looked and smiled.  ‘My dear sir, that is not my custom.   I came to hear you minister God’s word”.    He visited us several times.  I always knew when he would come.  It was when his own church had a family service!  Shall we say he was not overkeen on them!

I visited him several times in his own home in St Andrews before he returned to the West.   He had this enormous gift of being able to make you feel that you were the most important person in the room when he spoke to you – he gave you his full undivided attention.

We discussed many things – some of which were, and shall remain, private.  But there are three times that stood out for me.

The first was when he wanted to encourage me in preaching.  He told me that St Peter’s would grow, and that people would come because of the preaching, and he warned me never to water it down or change the emphasis I then had.   Whilst I was not surprised at that, what I didn’t expect was his reason for saying that.  He said that as the church grew, we would begin to attract Christians (at that stage it was largely non-Christians or backsliders we were attracting) and some of them would want to change the emphasis and get me to tone down on the preaching.   I thought that was an unusual thing to say – and to be honest I was not sure if I believed him.  But he turned out to be right.

Kenny Borthwick– (my favourite charismatic C of S minister!)  recalls a similar incident when wrote movingly on his Facebook page of his debt to Mr Alexander.  “However, today, stuck inside in heavy Hebridean snow, I found myself remembering an incident that happened after Mr. Alexander’s arrival in Buchanan Street. A number of the Young People’s Group Committee thought they would go and say to him that he needed to shorten his sermons and alter his approach to ministry to make it more acceptable to our age group. I felt I had to speak up and say I could not agree with the intended delegation as I had found my life changing dramatically through what I had been learning. I found my heart pounding as I took that stance. Well, they went ahead with their complaint. Mr. Alexander listened politely and simply said he had to be faithful to the ministry God had given him. He blessed them if they should want to leave. They did. and their spiritual lives became marked by compromise, in fact they did things that even non-Christians would have hesitated to do. As a young believer it was my first but not last encounter with people leaving the path”

Another time I was asked to appear before the St Andrews ACTS (the ecumenical group) to explain why the Free Church, (we had just started a church plant in the town – with Mr Alexanders advice and help) was not going to become a formal part of it.  It was an extraordinary meeting. Mr Alexander was not there but he heard about it and chuckled with laughter when he told me what he had heard.   At one point the moderator of the Church of Scotland told me that as I seemed such a reasonable person, why didn’t we just join the Church of Scotland?  I told him that whilst others present might question the premises of his question, I couldn’t join because they wouldn’t allow me to.  When he asked why I told him that it was because I didn’t believe in the ordination of women.   He basically suggested a way round that which would have involved me being less than honest!   But this prompted one episcopal lady to have a real go at me in public.  When I suggested to her that we believed in diversity, and she was not exactly being tolerant she almost choked as she spluttered – “I cannot believe that a Free Church minister is accusing me of being intolerant”!

The third and most moving time was when he reflected on what had gone right, and what had gone wrong, in the Church of Scotland since the 1940’s and the growth of the evangelical movement within it.   He felt that their strategy of having evangelical ministers had been successful to some degree but had not resulted in as many evangelical churches as they had hoped – and he suggested that the baton was now being passed on to the new generation of Free Church ministers.  I was deeply saddened – not just because I could see that the collapse of the Church of Scotland was about to happen – but also because I was not sure about his view of the Free Church.  I did not think that we were ready for that.

As the Church of Scotland began to disintegrate – and some of the most prominent evangelical churches began to leave – Gilcomston, Holyrood and most of all, his old church, the Tron, Mr Alexander wrote a letter explain why he was not leaving.  I wrote a response to his letter here – https://theweeflea.com/2013/08/27/alexander-leaving-eric-alexander-on-leaving-the-church-of-scotland/

It was disappointing that what was a letter to the congregation he then attended was considered as a propaganda coup by ‘121’ and was widely distributed.  In one local church which was in the process of splitting one evangelical minister even photocopied it and handed it out to members of the congregation, trying to prevent the inevitable split.

I have no idea what Mr Alexander thought over this past decade as he saw his work being so horribly dismantled.  At least that was his work for and within the denomination – including his work on the question of marriage.   But his work amongst people and in the wider context of the church was not, and cannot be, dismantled.  Because it was the work of teaching the Word of God – and he did so in such a weighty and serious manner that so many times we felt ushered into the presence of God. It was not just his oratorical skills.  He had such a deep and resounding voice that he could have read the back of a cornflakes packet and we would have thought it was weighty!    It was the substance of what he taught and the ‘anointing’ – the ‘unction’ from the Holy Spirit that he had.   When he said ‘Let us worship God’…you knew that was precisely what you were going to do!

Thankfully you can listen to some of his sermons on his own website.  I marked his passing yesterday by listening to one of his Romans series

I was also sent this audio of what was as far as I know his last words spoken in public – these have a particular poignancy because they were at the funeral of his beloved Greta.    What he said about her, is now true for him.  First, he was in Christ, then for Christ and now with Christ.

We give thanks to the Lord for the gift of his servant, we pray for the family, we weep for the Church, and we look forward to being in glory when we won’t need to hear Mr Alexander ushering us into the presence of God to worship him – because we will already be there!

The Slow Death of the Church of Scotland &#8211; Accelerates