This weeks article in Christian Today – you can read the original here..

When King Saul prophesied at Naioth at Ramah, the people were so surprised that it became a proverbial saying: “Is Saul also among the prophets?” 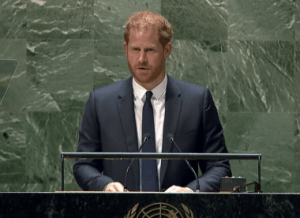 I thought of this when listening to Prince Harry’s speech to the UN last week. He spoke movingly in his sermon – for sermon it was – of his mother and of Nelson Mandela. But then he moved into specific political and moral issues where he delivered the ‘gospel’ according to progressive doctrine. His three points were climate change, disinformation and abortion.

A prophet declares the word of the Lord, so let’s see how prophetic Harry was. On climate change, as with the other list of disasters he mentioned, he spoke of how he understood and knew people’s pain. He was certainly right to point out that it is the poor who bear the brunt, not only of climate change, but also the measures taken by the wealthy to combat it.

Think for example of the people of Sri Lanka, whose super wealthy president decided to enamour himself to his WEF admirers by banning fertilisers. As a result, crops failed, people went hungry, riots ensued, and he was forced to flee the country.

Prince Harry never has to worry about heating or cooling his Californian mansion, or how much trips home to the the UK to see his family will cost. Or indeed, how many holidays he and Meghan can have. His ability to empathise with those who cannot afford heating bills or expensive food is somewhat limited.

Given he was standing on the same ‘green’ ground as his father, Harry obviously felt safe to weigh in with his considered opinion and calculated empathy. But it was when he turned to the politics of his new home country that he displayed a lack of political awareness and of moral probity.Comparing the war in Ukraine with the ruling of the US Supreme Court on abortion, he pronounced that this was “a global assault on democracy and freedom”, and an erosion of constitutional rights.

This is the same Prince Harry who pronounced that the constitutional right to freedom of speech was “bonkers”. Perhaps he has discovered a newfound respect for the US constitution? If so, he should read it before making pronouncements on the world stage.

The US constitution does not mention abortion and there is no constitutional right within it. It does however mention a right to ‘privacy’ and on that somewhat nebulous basis, this was used as an excuse to declare a constitutional right to abortion.No serious constitutional lawyer, whatever their view on abortion, would take that as a plain reading of the text. All the Supreme Court did was right this wrong and send the right to decide on abortion back to the State legislatures – the people who are elected to make laws. That is what democracy is.

The irony is that Prince Harry was not speaking to the UN as someone who was elected by the people, nor as someone who had made his own way in life. Rather he was there because of the greatest white privilege of all – being brought up in the Royal Family! He can hardly speak as the democratic representative of the people.

On the question of abortion, Harry again seems not to have thought the issue through. His wife had a “guttural” reaction to it – one which Harry as a self-proclaimed ‘feminist’ shared. But the argument about abortion cannot be reduced to the ‘guttural’ reactions of the rich and powerful. Especially when they tell us that letting democratic representatives determine local policy is somehow on a par with the war in Ukraine!

Harry Speaking for the Many

He then spoke about “the few, weaponizing lies and disinformation at the expense of the many”. Clearly, he was putting himself on the side of the many – the poor, oppressed, voiceless classes with whom he shared such empathy. He too feels battered. He understands.

I doubt it. This is a man who gets invited to speak at the UN on the basis of his parentage, who has a new book coming out (for which he will have been paid a substantial advance), a Netflix deal worth a reported $100m, and a Spotify deal worth $75 million. He and his wife are being paid for this not because of their talents, philosophies or communication skills. It is entirely because of their celebrity caused by the privilege of their inherited or wed into position. In other words, Harry is one of the ‘few’ he is complaining about. And on the topic of ‘disinformation’, his critics might have something to say about that.

No, Prince Harry is not among the prophets. I would say he is a lost soul in search of a purpose. He reminds me of Pink Floyd’s “Wish you were Here”, the words of which go, “We’re just two lost souls, swimming in a fishbowl, year after year. Running over the same old ground, what have we found? The same old fears.”

Kings such as David, Solomon and Hezekiah were also prophets, and political leaders from Constantine to Scott Morrison have professed their faith in Christ and sought to live according to his word. There have also been poorer prophets who have spoken truth to power without themselves being the powerful.

Watching Harry’s speech reminded me of how much we need the truly prophetic – not clichés, memes or fantasy. We need the reality of what the Lord says – backed up by what we do. I have just been going through the book of Revelation and it is amazing how apposite it is. In chapter 6, we are told of the four horsemen of the apocalypse – war, violence and civil strife; famine and inflation; and finally, disease and death.

But there is only one who can defeat them (and the kings of this earth and the merchants who serve Babylon). That is the rider on the white horse in Revelation 19. He is the Word of God and He is the One the true prophets proclaim. May all the kings and princes of this earth “kiss him” or “your way will lead to your destruction” (Psalm 2).

Harry, Meghan and Oprah: An interview fit for a kingless society

What the Supreme Court decision on Roe v Wade means for the West and the Church &#8211; CT