Australia is paradise.  But perhaps paradise lost!  Since we came here in 2019, we have had fire, plague, war and now floods!   The amount of rain that fell on Queensland and New South Wales in the past couple of weeks was extraordinary.  After 13 days of rain people were saying to me ‘you must feel at home…you will be used to this!).  I had to point out that whilst we often had rain in Scotland, Dundee was the sunniest city in Scotland (200 days with sun per year!) and that our home in Highlands would only get 25-30 inches of rain per year.   Some areas in NSW had that in one day in the past week!   Thousands of homes have been destroyed, and several lives lost. 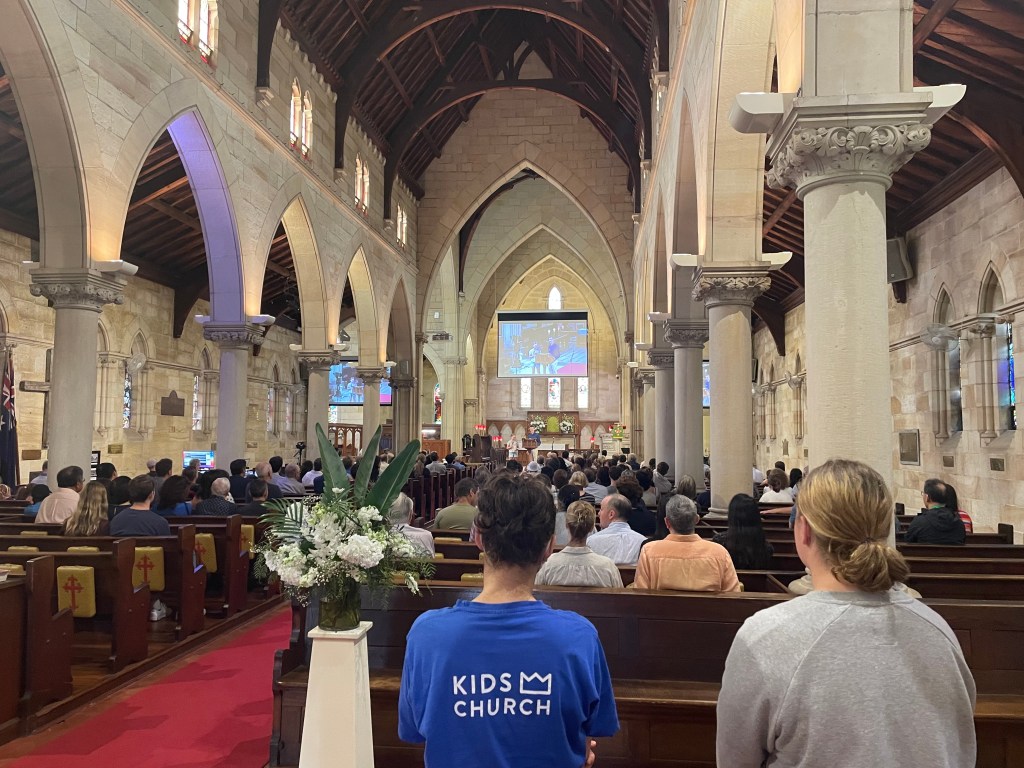 Speaking of water, we were on door duty at St Thomas’s yesterday.  One couple came in and asked if this was ‘where the Christening was’.  I wanted to inform them that it was baptism – but thought better of it!  It’s interesting being with Sydney Anglicans – in general they seem to take the low view of the sacraments.  I think that this was partly as a response to the high sacramentalism of some previous generations and because of the influence of Broughton Knox’s ecclesiology.  As a result, baptism, especially infant baptism, seems to me to be played down a lot.  Adult baptism is much more dramatic and seems to offer more evangelistic potential, so it seems t to have a higher significance within most of the Anglican churches here. 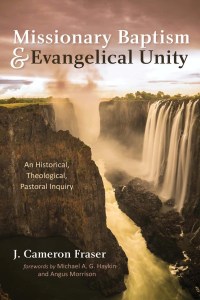 As it happens, I have been reading a fascinating book on the whole subject which I would love my Anglican brothers and sisters to get a hold of. J. Cameron Fraser’s ‘Missionary Baptism and Evangelical Unity’ is a helpful and unique contribution to our understanding of Baptism – and how, what can often be a dividing subject, could become a unifying one.   This book as already been favourably and well reviewed in The Record by Thomas Davies.

It’s a short book – only 94 pages.  Well written and packed with stimulating theology and history combined with practical applications. Cameron is a pastor in the Christian Reformed Church, but comes from a Highland Presbyterian church background.  He discusses the theology of baptism from a variety of historical perspectives especially Cunningham, Bannerman, Hodge, Kuyper, Barth, Jeremias, Sinclair Ferguson, the Westminster Assembly, David Wright and the Dutch Reformed.   Although at times a bit dense (understandable in such a short book), I actually found the bringing together and discussion of these views helpful.  Not least the discussion about Cunningham, but also the explanation of Joel Beeke’s and David Wrights views.

The book addresses the issues through looking at the historical understandings of the main questions.  What does baptism actually do?  What does it mean?  And who is it for?   I won’t detail the whole book (it’s well worth you getting it for yourself) but instead I offer these personal reflections.

Cameron confirms something I had thought for many years.  Dr John Kennedy’s teachings on baptism did a great deal of harm in the Free Church.  He distinguished between what was required for communion (an accredited profession of faith) and what was required for baptism (an uncontradicted profession of faith).  In other words, someone who professed belief in the Christian faith and lived an outwardly moral life could have their children baptised.  My father-in-law once commented to me that in Stornoway he sometimes wondered that that there were so many getting baptised that they could just line them up and baptise them with a hose.     This view that you were entitled to baptism even if you didn’t normally attend church or make any profession of saving faith caused us difficulty in Livingstone Free Church.  There was for example one couple who came asking for their child to be baptised – they were not members, did not attend and were not professing Christians.  So, we did not give them baptism.  However, they just went to another Free Church and got it ‘done’ there.     This position led to a frightening nominalism.  I once did some work for a declining Free Church – seeking to work out why they were declining and what could be done.  One factor was that in the previous 15 years they had had 40 baptisms – not one of whom now attended the church.   Of course, you can get nominalism in a Baptist set up as well.  The Baptist church in Edinburgh I attended for a couple of years had a surprising number of nominal ‘Christians’ who had been baptised.  There was a time when getting baptised as a teenager was the thing to do.  So much so that I recall one man who had been baptised as an adult nine times!

Cameron also raises the issue of baptismal regeneration.  When Annabel and I were involved in leading the international youth camps we went to the Netherlands for several of those.  At one the question was asked of a young Dutch teenager – ‘when did you become a Christian’?’  – ’16 years and six months ago’.  ‘How old are you?’.  ’16 years and six months’!  He was referring to his birth and baptism.  That was when he became a Christian and was ‘presumed regenerate’.  A presumption without substance!

I found Cameron’s analysis of William Cunningham the great Free Church theologian, insightful.   Cunningham did not accept the view of his friend, Princeton Seminary Theologian Charles Hodge, that a child should not be presumed to be regenerate when baptised, but they should be presumed to be elect.  In either case they were assumed to be a child of God until proven otherwise.  Cunningham argued that the primary mode of baptism was adult – but that children of believers should also be baptised.    “Cunningham was insistent that no sharp distinction should be made between the qualitifications for baptism and the Lord’s Supper.”

Cameron then refers to a wee argument I had with Donald Macleod who “expressed strong opposition to ‘a growing demand for Baptist style Services of Dedication for Infants’ in the Free Church.  Macleod, in my view, is ably refuted by David Robertson in ‘The Downgrade of the Free Church – A Response to Donald Macleod”. (p.62) (if you click the link and also ‘When the Levy Breaks’ you will see the issues discussed in much more detail).

It may be that some readers, who don’t have a bent for historical theology, might struggle with the first half of the book – but I would urge you to persevere.  The practical outworking of this theology in the second half is excellent.   For example, Cameron argues that   Believer’s baptism is the norm.  “The New Testament pattern was of families entering the church by baptism.” (p.69) Believer’s baptism does not just mean ‘adult baptism’.

What about child communion?  By definition a baby cannot take communion.   Cameron states that the emphasis on baptism being for believers and their children “makes it perfectly reasonable for infants to be baptised as part of a Christian family, but to make their own profession of faith in later years. That said, such a profession need not await adulthood or late teenage years, as has traditionally been the case in the CRC. The issue is not age but genuine faith an age-appropriate spiritual discernment, whether at 6 or 60.” (p.78).  I remember when our son Andrew became a communicant member, aged nine.   When he came to the Kirk Session, they had to ask him to remove his chewing gum!   But he gave a clear and adequate understanding of the faith.  It was our practice in St Peters to allow young children to take communion, if they could give an ‘accredited’ profession of their faith.  This in practice meant that they had to have a basic understanding – and that at least one of their parents could testify to their life and doctrine.  I recall baptising a primary school girl on the basis of her own profession of faith – not her parents.

I found the penultimate chapter – with the same title as the book, Missionary Baptism and Evangelical Unity, particularly helpful – not least because Cameron explains the views of my old history teacher, David F. Wright, of the University of Edinburgh.  The six ‘Wright’ points are worth listing:

With a couple of caveats, I would agree with these points.   I am encouraged that in Scotland there are a growing number of Baptist or Independent churches who accept those who have been baptised as infants as either associate or full members, on their profession of faith – without requiring them to get re-baptised (‘properly done’).  Likewise, there are those who, like St Peters, have sought to accommodate those who are unable by conviction to have their children baptised.  Baptism should not be ‘the water that divides’, but rather the water that unites.  J. Cameron Fraser’s wee book is an important work in enabling to see how that can work out in practice….

I leave you with the quotation with which he finishes the book. ‘Rabbi’ Duncan’s famous aphorism –

“I am first a Christian, next a catholic, then a Calvinist, fourth a paedobaptist, and fifth a Presbyterian. I cannot reverse this order”.

If you are interested here is the story on how I changed my view on baptism… – Baptism &#8211; A personal Journey in which it is discovered that infant baptism is Biblical!