We often sing, write and preach about how Jesus is all that we need. But is Jesus enough? To even ask the question seems heretical – but bear with me.

I have recently come to the conclusion that the mere use of the word ‘Jesus’ or the profession of his name is not only not enough, but it is profoundly dangerous. Is a song a Christian song if it has the word ‘Jesus’ repeated several times? Is a person a Christian teacher when they invoke the name of Jesus for all their doctrines?

One of the biggest problems in contemporary society is how language is being twisted and rendered meaningless by those who wish only to destroy. ‘Equality’, ‘inclusivity’ and ‘tolerance’ are familiar buzzwords, but they now mean almost the polar opposite of what they used to.

The same situation occurs within the Church. Just because someone speaks in the name of Christ and with the language of the Bible, does that mean they are to be accepted as Christians?

I have lost count of the number of times I have been accused of being ‘un-Christlike’ because I don’t accept that someone who is teaching the opposite of Jesus is a Christian. I don’t remember Christ accepting as his followers those who denied who he is and what he taught. Merely using the name of Jesus does not give a special pass to teach unbiblical nonsense.

Francis Schaeffer in his book, Escape from Reason, saw where the twisting of language would lead:

“I have come to the point where, when I hear the word Jesus – which means so much to me because of the Person of the historic Jesus and His work – I listen carefully because I have with sorrow become more afraid of the word Jesus than almost any other word in the modern world. The word is used as a contentless banner, and our generation is invited to follow it. But there is no rational scriptural content, by which to test it, and thus the word is being used to teach the very opposite things from those which Jesus taught.”

As Schaeffer went on to point out, the word ‘Jesus’ has become the enemy of the real Jesus and the enemy of what he taught. When you read books such as ‘The Lost Message of Jesus’, it becomes clear that this is not merely a question of different nuanced theological perspectives on the one Christ. This is teaching about two different Christs. The Jesus of John Shelby Spong is an eternity away from the Jesus of John Stott.

You don’t have to travel far in the UK to hear, whether in person or in the media, clergy who in the name of Jesus separate him from the Jesus of history. They each have their own personal Jesus – who remarkably agrees with their political, social, moral and religious views. He’s very nice and accommodating – to them.

But this is utterly useless in terms of communicating the Good News of Jesus Christ. Not least because the Jesus made in their own image does not exist. He is a figment of their imagination. He may be useful for a soundbite on ‘Thought for the Day’ but he is utterly useless when it comes to life, love and liberty.

Again, to cite Schaeffer: “It is not sufficient to say only that God reveals Himself in Jesus Christ, because there is not enough content in this if it is separated from the Scriptures. It then becomes only another contentless banner.”

Schaeffer goes on to show that whilst it is comfortable to go on speaking the Gospel in the familiar phrases of the middle classes, it is not sufficient. Even if you have an orthodox view of the person of Christ, the language we use can conceal rather than reveal him. Many of the sermons I hear on mainstream media are just a series of well-worn religious cliches – contentless, meaningless and useless. People need content.

When we ask people to believe in ‘God’, or believe in ‘Jesus’, what does that mean? Perhaps there was a time when we could have assumed some cultural agreement and awareness of what these words meant. Not anymore. Before we can call people to faith, we have to tell them about the one they are to have faith in.

A number of years ago I was speaking in a Scottish university when I had the unusual experience of an atheist telling me that I had destroyed his atheism. He then asked me why I believed. As I began to explain with all the usual apologetic arguments, I stopped and said that I really believed mainly because of Jesus. His response: ‘who is Jesus?’

It was a revelatory moment for me. Of course, he was aware of a religious person called Jesus who came from the Middle East and who lots of people claimed to follow – but other than this vague awareness, he did not know. 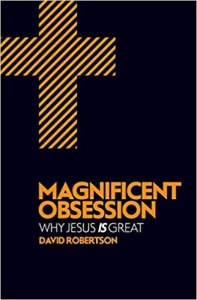 How can they believe in the one of whom they have not heard? (Romans 10 :14). I ended up writing a book, Magnificent Obsession, just for the many people like him.

Ever since then I have always tried to tell people about Christ. Not just talk about him, but proclaim him in the prayer that the Holy Spirit will show the beauty, truth, power and magnificence of the real Jesus.

Jesus himself told us that there will be those on the day of judgement who will talk of the many wonderful deeds they have done in his name. His response? “Then I will tell them plainly, ‘I never knew you. Away from me, you evildoers!'” (Matthew 7:23).

Those are words that cause me to pause and reflect. The key question is not whether I know Christ, but whether he knows me. Of this I am certain: proclaiming a version of Jesus other than the Jesus of the Bible is a sign that I neither know, nor am known, by the real Jesus.

The more I go on, the more I share in the desire of the apostle Paul, that I would know Christ; and the more I share his prayer that all of us would be given ‘the Spirit of wisdom and revelation, so that we may know him better’ (Ephesians 1:17).

Jesus is not enough. If by that you mean the mere use of the word ‘Jesus’ – or the Jesus of the academics and religious philosophers. But if you mean the Christ who is brought to us through his word, then he is more than enough. He is everything! He is Lord. He is our magnificent obsession.

Is the Church in the UK a sinking ship? Christian Today