This weeks Christian Today column – you can read the original here

Lessons from the Novak Djokovic Row 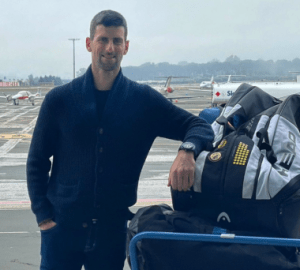 Novak Djokovic was excited. He had been granted an exemption to participate in the Australian Open in Melbourne – a tournament he has won nine times. He was so excited that as he left Dubai on the 14-hour flight to Melbourne he made the mistake of tweeting his joy at being permitted to go. But then it all went wrong.

He was detained at the airport – kept in a room on his own with armed police and eventually sent to a government hotel used for refugees. He has appealed and his court case will be heard on Monday, where the expectation is that he will be deported.

What happened? The story has much to teach about contemporary society. Not least the fact that everyone with a search engine can quickly find enough information to support their immediate emotional reaction.

As his father Srdjan told Russian media: “Tonight they can throw him in a dungeon, tomorrow they can put him in chains. The truth is he is like water and water paves its own path. Novak is the Spartacus of the new world which won’t tolerate injustice, colonialism and hypocrisy.”

There are others who just know that this is the Australian government being fair to everyone. After all, why should a rich celebrity tennis star be allowed to come into the country when he has not been vaccinated, as the rules demand? (Australians can come in without being vaccinated – it’s just foreigners who must obey that rule). Djokovic arrogantly assumed he would be allowed into the country because he was Djokovic. Good for the Australian government for deporting him!

But as ever, the story is somewhat more nuanced and complex. I have a degree of sympathy with both positions. Tennis Australia and the Victorian government gave Djokovic an exemption to enable him to play at the Melbourne Open. The Department of Home Affairs granted him a visa, but the Australian Border Force did not permit him to leave the airport and cancelled his visa. Why? When Djokovic boarded his plane there would have been ABF officers there. Why was he allowed to board the plane? What had changed in Melbourne?

The answer is a disturbing one. Thanks to Djokovic’s ill-advised tweet, suddenly there was political pressure and outrage. Where there is outrage, there is Twitter – and so the mob was soon stirred. Journalists, politicians and celebrities piled in, expressing their disgust at Djokovic being given favourable treatment. One lovely tweet declared, ‘I hope Novak contracts Covid again down here and can’t even play in the Australian Open.’ An ABC journalist posted a ‘joke’ suggesting that waiters in Australia would want to spit in the tennis star’s food.

The political and media classes think that social media is the voice of the people and so suddenly the government that had initially given Djokovic the visa, demanded that the evidence (which one presumes they had already assessed before granting the visa) should be shown at the airport.

The story is a national embarrassment for Australia and a humiliation for Djokovic. But surely the rules are the rules? One of the interesting changes in the past couple of years is how people who prided themselves as free spirited, rebels and rule breakers have suddenly come to be quite obsessive about keeping the rules. While laws are essential in any society, we need to be wary of the cry of authoritarians down the ages – ‘it’s the rules’. Who makes the rules, what are the rules based on, and who interprets them?

Boris Johnson was quick to praise the Australian government for their tough stance on vaccines. One wonders if Djokovic will be allowed to play at Wimbledon? The Prime Minister seemed to have no problem with the thousands of FIFA officials who came to the UK or the COP26 delegates. They were not asked to quarantine or vaccinate. There is a widespread sense that the rules are somewhat selectively applied.

It was argued that the criteria used for revoking the visa was the Public Interest Criterion 4007 of the Migration Act which provides that a visa applicant must be “free from a disease or condition that is, or may result in the applicant being, a threat to public health in Australia or a danger to the Australian community”. Given that these criteria applied to the visa when it was originally granted one wonders what could have changed. In addition, Djokovic has had Covid-19 and so will have the antibodies.

The rules say that everyone who comes in has to be vaccinated. But why? There are around 100,000 cases per day at the moment in Australia – 25,000-plus in Victoria. It is hardly as though Djokovic is going to be bringing a disease that no one in Melbourne has! In fact, the current Covid case rise in Australia far outstrips that in Djokovic’s native Serbia! He’s coming into danger – not bringing it.

But this has to do with the vaccine. We know that the vaccine does not stop you getting, or spreading, Covid. It stops most people getting seriously ill and is a great help in stopping hospitals being overwhelmed. But there is no logical reason to prevent someone coming into a country already filled with Covid just because they do not have a vaccine. This situation just shows up the anomalies created by the various Covid measures.

Do the rules make sense? And are the rules fair? Scott Morrison, the Australian PM, certainly thinks this is about everyone getting a ‘fair go’. But is everyone treated equally? My experience, and that of many others, is that this is not the case. Last year I was not allowed to fly home to see my dying father or attend his funeral. But Hollywood stars seemed free to come and go to Australia as they pleased. I know of several people who were able to visit the US and the UK because they had both the connections and the money.

And what if Mr Djokovic is not being treated fairly? There are others at the Melbourne tournament who were given exemptions. What if it is his very fame which has caused his predicament? Governments who operate on the basis of ‘nudge’ theory are very keen for sports stars they consider as role models to be giving the right message. In a week where four people who tore down a statue in England were found not guilty partly because they were ‘on the right side of history’, what if Novak Djokovic was just on the wrong side of history – and politics?

In a society which is based entirely upon the rules laid down by politicians and bureaucrats, there is no room for mercy, forgiveness or common sense. Where everything is regulated down to the last jot and tittle, where corporate power and mob rule go hand in hand, and where everything is politicised, there is the enormous danger that the ‘equality of all before the law’ – one of the gifts which Christianity brought to the West – is in danger of being lost. This is not just about tennis. It is about justice and equality – for all.

After I wrote this – today’s Australian has a superb column by Chris Kenny saying much the same thing.  In case it is behind a firewall here are a few of the best quotes…

“Djokovic was given proof of vaccination exemption from Tennis Australia and Victoria, and applied for and was granted a visa from the federal government. But he spends this weekend in detention, as yet another target for public Covid shaming and political grandstanding.”

“Plenty in the community denounce Djokovic, the multi-­millionaire Serbian. The public have been conditioned by politicians, hysterical media and even some leading medicos to denounce the unvaccinated as if they are viral-terrorists – infected, dangerous, and deliberately acting as superspreaders.”

“It is absurd that we are encouraged to treat the unvaccinated as lepers given that more than 90 per cent of our compatriots are vaccinated and the latest virus variant is spreading wildly, mainly via fully vaccinated people.The unvaccinated are a risk to themselves, not the rest of us.As a fully vaccinated person, I could care less whether the person next to me is vaccinated or not. But mobs like to identify a bogeyman, and politicians love to fuel such antipathy to justify their power grabs and deflect criticism.”

“The paranoid fear one more infection when we are dealing with more than 70,000 new cases a day. They seemingly resent their own jabs and compliance with the rules and only draw comfort from others being forced to comply.”

“We are sending healthy nurses and doctors home from hospital because they have been in close proximity to, wait for it, sick people. We are crippling other workplaces with similar precautions, leaving some supermarket shelves empty.We have overstretched our Covid testing systems by encouraging everyone to get tested; yet the infected are told to go home and take Panadol. We know Covid can kill the vulnerable and unvaccinated, so with strains becoming increasingly mild we ought to focus less on case numbers and more on those who are ill.”

“To keep these people happy, and to make our leaders seem gritty, we reject from this country a Covid-recovered, negative-tested tennis star who was granted a proof of vaccination exemption and a visa.It is embarrassing for a country once seen as welcoming, rational and easygoing. The rejection of Djokovic – the return of Serb – is not a sensible or science-based approach, except for political science.”

“But when it comes to rules, Djokovic arrived only after being granted exemptions and a visa. He was not to know he would be used as a convenient whipping boy in an ongoing pantomime – a Covid theatre of fear, paranoia and political one upmanship that ensured his case would receive exceptional scrutiny.So long as we have high vaccination rates and vaccines show limited efficacy in halting infections and transmissions, the unvaccinated imperil themselves and not us. We should not easily trample on their rights, because it sets a bad precedent and demeans our democracy.”

“Certainly, the rich and famous should not be afforded any special favours, as they infamously were in Queensland, spirited across borders while bereaved Queenslanders or sick southerners were denied. Yet, in those and similar episodes in other states the problem was not the treatment of the stars but that similar common sense was not applied to the rest of us.”

“There are two reasons the Djokovic case is an abomination. First, he abided by the rules as they were outlined. Second, those rules have become redundant – mandatory testing is sensible to minimise infections in the confined spaces of 14-hour flights, but vaccination status hardly matters now when both our vaccination and infection rates are so high.”

“The Djokovic Djoke shows how the federal government apparatus has been caught up in the same paranoia, crowd-pleasing and disproportionate nonsense that has bedevilled five states.Having deliberately fuelled fear and anxiety for two years – first to get people to follow the rules, then to justify their actions – the politicians and bureaucrats are now servants to the baying mobs they have created.Oppositions have been too timid to call it out, preferring to profit from outrage and trepidation. Most media are addicted to Covid catastrophism, drawing eyeballs with hysteria and downplaying or ignoring the social and economic costs.”