Allow me to wish you a happy Christmas and to share with you a real treat from here in Australia.  I have a number of things that I would love to share with you – for your perusal over the next few days.  The first is a wonderful article – for Christian and non-Christian alike.   The journalist and foreign editor of the Australian Greg Sheridan has become a good friend.  He is a superb writer and is a real gift to the church here in Australia – as he has increasingly ‘come out’ as a firm believer in Christ.  His book Christians – the Urgent Case for Jesus in today’s world – is wonderful.   As regular readers will know I have been doing a fortnightly podcast with him – discussing it chapter by chapter.  For example this one…  The ASK Podcast 9 &#8211; Angels &#8211; with Greg Sheridan

Yesterday he published a wonderful Christmas article in The Australian  entitled 160 pages that may Change Your Life.

With his permission, for those of you who do not subscribe to the Australian (and why not?!) here is the full text of the article

Chances are this Christmas, you’ll do some reading. I want to suggest 160 pages, about half the length of a regular novel.
I promise you’ll enjoy it and it will equip you with essential cultural literacy. And it may do more than that.
I’ve written a couple of books now on Christianity, and friends sometimes ask me where they should start with the Bible. Its bulk is intimidating. The Bible in front of me right now is 1700 pages. One of the most intimidating, discouraging, least interesting ways to approach it is just to start from the beginning and imagine you’ll work your way through.
Here’s a simpler, easier, shorter way to learn about the historical figure of Jesus Christ, his divine claims, ethical teachings and power to transform lives. This also works if you have no interest in religious belief.
As I’ve recently argued, history now makes it clear that the New Testament is the work of witnesses of Jesus, and of those who interviewed witnesses.History certainly cannot establish the truth or falsehood of the central Christian claims – that Jesus rose from the dead in his body and is the son of God.

But history does establish clearly that Jesus was a real historical figure, he lived at the time of Pontius Pilate’s rule, he preached and had loyal followers, he was crucified and died, and shortly after his death his followers claimed he had risen from the dead and was the eternal son of God. History also establishes that the earliest parts of the New Testament were written within 20 years of Jesus’ death, and all the Gospels within one lifetime of the crucifixion.

It’s certainly fair enough (though in my view mistaken) to reject Jesus’ claims. But their cultural power and relevance are undeniable. So once in your life, believer or atheist, sceptic or agnostic, open-minded questioner or devout follower, vainglorious intellectual or humble truth-seeker, it’s worth directly reading these 160 pages. No need to read them in any particular frame of mind. Just read them as you would any story, and any commentary on a story.

Don’t be intimidated by the cultural distance from the material. That’s the easiest bridge. The wild, radical difficulties come from the mixture of absolute familiarity and eerie strangeness in the Gospel story, the sense that it engages our humanity and yet takes it places we cannot imagine on our own and aren’t necessarily comfortable about. But that’s my reaction. Garner your own. (I’d love to hear from anyone who does that.

Start with Luke’s Gospel, 42 pages in my Bible. Luke is the easiest evangelist for a modern reader. He starts by telling us he is in effect a journalistic chronicler. He has read all the accounts of Jesus everyone else has written and consulted all the many eye witnesses available to him to produce the definitive account. It is the longest of the Gospels and the longest of the books of the New Testament I’ll ask you to read.Luke has the fullest account of Jesus’ birth and all the warmth of the first Christmas. He records from Mary the Magnificat, the greatest speech in the New Testament by anyone except Jesus himself: “My soul magnifies the Lord, and my spirit rejoices in God my saviour.”Luke contains the whole story of Jesus – his childhood, teachings, miracles, trials and suffering, agonising death, and triumphal resurrection.

Luke was a physician and his Greek, so the scholars say, the best in the New Testament. You can easily complete Luke in one or two sittings. Next read the first letter of John. It’s short, eight pages, but packs a punch.
There’s nothing in all literature to quite match John’s tone of voice, the wonder and happiness that he has actually known Jesus, and the staggering truth of Jesus’ humanity and divinity. In all of John’s writings, the quality of love is central.
The reason to read this after Luke is mainly for John’s tone. This is what the apostles felt like after knowing Jesus.

After John, make your first acquaintance with Paul in his letter to the Philippians. One reason to like Paul so much right across the New Testament is that he is a man of such widely varying moods, loving or grumpy, elevated in his theology but sometimes downcast in his feelings, uplifted by the most intense spiritual relationship with Jesus, yet forever concerned with the practicalities of fundraising and community organisation.He loved his church in Philippi and wrote with great human warmth to old friends. This is also the beginning of the Christian prison writing tradition. Paul was, by the time he wrote this, an old man in a Roman prison who had been arrested and beaten time and again.And yet there is a serenity, a psychological independence from his circumstances, for he enjoys the friendship of Jesus. He wishes he might be with Jesus already in the next life but knows it’s his duty to continue for the sake of everyone else.

By the way, Paul’s writings make it clear that you cannot so distend your interpretation of Jesus as to remove the divine, or deny the miracles. Paul constantly insists on Jesus’ physical resurrection. He also repeatedly says that his own knowledge of Jesus comes from divine and miraculous revelation, and from a physical encounter with the risen Christ. As poet Dana Gioia put it, Paul is “either a psychotic or a saint”. And if he is psychotic about miracles, or just lying about them, then his mystical union with Jesus, and all his profound and beautiful moral teaching about the essence of love and the universality of human nature, is logically worthless.

Philippians also contains the most emphatic, poetic statement by Paul on Jesus’ identity. In the Jerusalem Bible, this passage reads: “His state was divine, yet he did not cling to his equality with God but emptied himself to assume the condition of a slave and become as men are, and being as all men are, he was humbler yet, even to accepting death, death on a cross. But God raised him high and gave him the name which is above all other names.”Paul’s writings are the earliest in the New Testament. From the start, he is pellucid about Jesus’ divinity.

After this, read the Acts of the Apostles, which shows how tough the early Christians had it, then John’s Gospel, once more for the grandeur of his vision and for the clearest statements of Jesus’ identity. Round out your 160 pages with Paul’s first letter to the Corinthians, with its piercing passage on love, and his letter to the Galatians, with its revolutionary espousal of universal human dignity.

Finish with Peter’s second letter, for no other reason than his discussion of angels. The early Christians didn’t think theirs was a mind-body wellness movement but a divine revelation that gave purpose, meaning and transcendence to life.
If you read these 160 pages and remain indifferent to Christianity, fair enough. But I dare you to do it anyway. 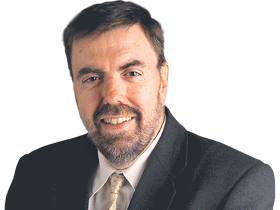 Greg Sheridan is The Australian’s foreign editor. His most recent book, Christians, the urgent case for Jesus in our world, became a best seller weeks after publication. It makes the case for the historical reliability of the New Testament and explores the lives of early Christians and contemporary Christians. He is one of the nation’s most influential national security commentators, who is active across television and radio, and also writes extensively on culture and religion. He has written eight books, mostly on Asia and international relations. A previous book, God is Good for You, was also a best seller. When We Were Young and Foolish was an entertaining memoir of culture, politics and journalism. As foreign editor, he specialises in Asia and America. He has interviewed Presidents and Prime Ministers around the world.

Then this memory from a few years ago.  I have now uploaded this Christmas video about my encounter with Richard Dawkins on my YouTube and also on Vimeo.

Finally here are some other highly recommended articles for you to read.

Tom Holland on The Myth of Pagan Christmas – fascinating.

This is a fascinating and brilliant perspective from someone I do not know and don’t think he is a Christian  – but Stan Grant is an indigenous writer and his latest article is outstanding –  With Christianity receding and many abandoning hope, today’s Christmases are not like those of my childhood

I hope and pray that you will have a great Christmas….and that you will know the Light of the World…listen to this weeks Christmas podcast to hear more about what that means –