Letter from Australia 103 – No More Lockdowns

We have had enough.   There is no way back.  No more lockdowns.  Last week celebrated our first day of relative freedom – today, having reached 80% double vaccinations we get to the next level – and from November the 1st the lockout of NSW from the rest of the world ends.  Even Victoria now recognises that zero covid is a pointless and ultimately damaging policy.  Dan Andrews who a few weeks ago was boasting that NSW should follow his ‘Go early, go hard’ policy, is now opening up despite having almost 2,000 cases per day. Queensland and WA are the only holdouts – but their turn will come.  It’s beyond absurd that I will be able to fly to Perth in Scotland, before I can fly to Perth in Australia! 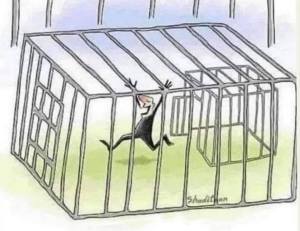 And there are so many things that are absurd and disturbing about what has been going on here.  Whilst we are not the dystopian nightmare that some are painting, my faith in Australia as a liberal democracy where the freedom spirit still lives, has been greatly shaken.  Overall many Australians seem to be quite happy to give up their freedoms to be kept ‘safe’.  It doesn’t bode well for the future.

Although there is still always humour to help – this wee video is the best of perceptive sarcasm!

Beijing is enjoying a moment of schadenfreude. In an article in Global Times, the mouthpiece of the Chinese Communist Party, Lu Xue recalled comments from Foreign Minister Marise Payne that were critical of China’s aggressive pandemic management. “Some countries,” she said in June 2020, “are using the pandemic to undermine liberal democracy to promote their own more authoritarian models.” Lu added, “Now, quite ironically, it turns out that Canberra plans to send its military personnel to help enforce social lockdown.”

Having observed, read and listened to way too much information and analysis, my take from the whole Covid nightmare is that the vaccines seem to work well, masks I am less certain of – no one has yet shown me any evidence that they make any significant difference, or that they are much more  than a psychological and political tool.  But what about lockdowns?  Two years ago they would have been unthinkable in Western societies – but as soon as Italy copied China they have, with a few honourable exceptions such as Sweden, become the norm.   Why?

The argument is that they prevent spread, save lives; they are short and sharp – short term pain and long term gain.   All the experts support them, and they have worked all over the world. But most of these reasons just don’t stack up.

I am opposed to lockdown for four reasons.

This is the least of the reasons.  I have found lockdown hard.  And I am in comfortable circumstances – far more than most people in the world.   The cruelty of banning people from visiting loved ones in distress for example is something I have experienced.  To be honest this is the least of my reasons.  Whatever personal loss or pain I have to undergo may well be worth it if the wider community benefits – but does it?   Which brings me to my second reason.

When modellers (who invariably throughout this crisis have got most things wrong – sometimes spectacularly so) tell us what the effects will be if we don’t lockdown – they never factor in what will happen because of lockdowns.  How many people will die because of lockdown?    The UK government estimated that up to 225,000 people would die – so far the number of deaths of those with Covid is 138,000.  Others estimate that lockdowns will cost five times more lives.   How many people will die because they were ‘protecting the NHS’ (forgetting that the NHS is there to protect them)?  Take this report (one of many) – “A drop in emergency referrals for cancer over the past year of lockdowns is likely to result in an extra 10,000 deaths from the disease, according to a new study. In particular, the “stay at home, protect the NHS” message is believed to have put people off coming forward and ‘burdening’ the health service for check-ups, meaning their symptoms were not investigated.  Or this really sad story from Dundee –

There are so many examples of extreme harmful measures being taken in order to ‘protect us.  None more absurd than shooting rescue dogs in order to prevent people travelling to pick them up!

I think of the harm to families and relationships – eg a fully vaccinated Sydney grandmother was denied a permit to go to Melbourne to help care for her grandchildren while her daughter battles advanced breast cancer.  Or this report from Queensland – “Queensland Premier Annastacia Palaszczuk says people should not have gathered at her state’s southern border to reunite with relatives in NSW for Father’s Day. Families divided by strict border closures gathered on either side of a plastic barricade in Coolangatta, where the two states meet, for emotional reunions on Sunday. People hugged and shared meals and gifts over the border barriers while police watched on.”

Think of the mental health damage – especially to young people. More than 40 NSW children and teenagers rushed to hospital for self-harm every day.  In Melbourne more than 340 teenagers per week are being admitted to hospital.   – a 57% increase on the same period last year.  There are no daily press conferences and lists for them.

Think of the damage done because of loss of education.  There is a reason the WHO never recommended that schools should close.

And then there is the economic damage – which the children of these children will be paying for.

Think of the political damage.  Western governments have got a taste of authoritarianism – and some have found they like the taste.  Surveillance technology, health passports, police limiting freedom of movement,, corporations banning freedom of speech….from the government’s point of view these are now all weapons they can use in the future.  There are so many examples of this authoritarian approach – let me just list one from today.  Melbourne police were filmed stopping people in a park who were drinking coffee (obviously maskless).  What were the police doing?  Checking to see if the cups really had coffee in them?  You write this down, knowing or perhaps hoping, that in years to come people will look back and wonder in amazement what we were doing!

Think of the damage to free speech and other rights we have taken for granted. I suspect the greatest long term damage will be the weaponising of fear by the State and the elites in order to control the population.  This has worked really well – too well.  It is a weapon that will be used again.  The collateral psychological damage from it will be enormous.   Not just in mental health, or politics, or media, but also in civic discourse.    It is astonishing how angry and bitter people get when you dare to write an article such as this.  (That cuts both ways!  Some of those who are anti-lockdown are just as angry, fearful and obsessed! )   I fully accept that I may be wrong – but you won’t change my mind by abusing or mocking me!

The answer to all of this is usually to say – well how many lives would have been lost if we had just let it run free?  To which the response is to say that it doesn’t have to be the two extremes.  A country like Sweden for example, did not have lockdown, but did have restrictions.

“While social distancing was the correct response, the economic consequences of belated measures to “lock down” economies were historically unprecedented and—as the true infection fatality rate of COVID-19 became clearer—may have exceeded the public health benefits.” (from “Doom: The Politics of Catastrophe” by Niall Ferguson)

3) The Poor Suffer the Most.

Lockdowns benefit the wealthy the most, and harm the poor the most.  The people who make the decisions to lock down are usually the ones who feel the pain least.   They are in secure government jobs with guaranteed income and live in nice homes in nice areas.  The professional middle classes who dominate the media, academia, the bureaucracy and big business are the same people who dominate politics.  Class interests come first.  That’s why we saw such a divide between West Sydney and the Eastern Suburbs. That’s why the rich countries are buying up far more vaccines than they need – leaving the poorer countries to suffer.  It’s dog eat dog.  Even – in fact especially – from left wing progressive parties.  It’s the Labor governments in Queensland and WA who are shouting ‘build the wall – ie. keep the border closed’ and who are desperately fighting to hold on to whatever wealth they can.

I read this somewhat exaggerated and yet perceptive comment – “there was never any lockdown.  There was just middle class people hiding, whilst working class people brought them things.”

The gap between rich and poor is seen in many ways.  Take for example education –  Sydney parents are paying for their children to work out with a personal trainer as an antidote to being cooped up in their room looking at screens all day.  Personal training typically costs about $90 for a 45-minute session and over $100 for an hour.

Or in terms of travel.  The very wealthy have been able to come in and out of the country.  But not the rest of us.  One pastor told me that he is in a very wealthy congregation and several of his people have been able to travel to the UK and USA quite easily.    The people who say ‘we are all in this together’ are being somewhat economical with the truth!

I suppose it could be argued – even with all the above – that if they work then it’s all worth it.  The trouble is – they don’t.  Lockdowns may suppress but they do not eliminate.  They may delay, at great cost, but they do not stop.  They have not worked anywhere in the world – and although they may in some instances have protected health services for a short time – in reality they are costing more lives and doing more damage.  In other words the cure is worse than the disease.  There is a reason why no country in the free world had lockdowns as part of their pandemic planning.   This article explains why. https://www.aier.org/article/lockdowns-do-not-control-the-coronavirus-the-evidence/

“Lockdowns were never a solution in any Western countries pandemic planning – for a good reason.  They harm small business, low income earners, school children and those who need medical treatment.”

I have another area of concern and that is the impact on the Church – but this letter is already too long so those reflections can wait for another time.  Meanwhile I leave you with this fascinating and informative discussion from Ireland – and a great song from Van the Man!

See you next week – I’m off to celebrate my (relative) freedom!

Letter from Australia 102 – The Bruised Reed….and the Broken Mind