This weeks column in Christian Today –

Remember where you were when 9/11 happened 20 years ago? I do. An American friend phoned me from Waverley station in Edinburgh and asked me to come down to the bar where he was watching the whole horror of the Twin Towers unfolding. Without hyperbole, it was clear that this was going to be a culture-changing and defining moment.

One aspect of that was the invasion of Afghanistan and the subsequent involvement and deaths of many Western troops.

Twenty years on, President Joe Biden obviously thought that getting out of Afghanistan, as per the agreement President Trump reached with the Taliban, would be a good idea – and a nice touch to have it done by 9/11.

This past week has shown that the best laid plans of mice and men can easily go astray. The debacle unfolding before our eyes is as defining as 9/11 and the worst defeat for the US since Vietnam, and possibly since the Second World War.

Why is it so important? And why should the Church care about it? 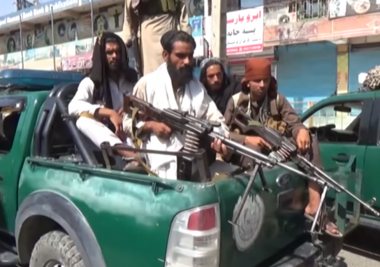 1. We have to be concerned for the people of Afghanistan – especially those who belong to minority groups, and women and girls. I heard someone praying for the ‘small nation’ of Afghanistan. However, it is anything but small! Afghanistan has a population of 37 million and a land area of 652,230 sq km (about 2.5 times the size of the UK).

It has always been an important nation. But leaving aside the geo-politics, it is the price that is being paid by its poor people which should concern us most. The dramatic pictures of people falling from planes, and babies being handed over fences reminds us first and foremost of the human cost.

2. The defeat of the West in general, and the US in particular, is astounding. Those who know their history will know that in the modern era, first the British, then the Russians could not conquer Afghanistan. Now it’s the turn of the Americans. There were arguments for and against the invasion of Afghanistan but it could be argued that once begun, it was a limited success. It was no longer used as a base for terrorism, Bin Laden was defeated, and some attempt was made to establish a more united and civil society. But with the establishment of the Islamic Emirate of Afghanistan, it is likely that all of that will disappear.

3. Afghanistan could now become a safe haven for various Islamist terror groups – the very thing the invasion was intended to prevent. Furthermore Islamist groups from Indonesia and the Philippines, to Nigeria and the West will be greatly encouraged by seeing ‘the Great Satan’ defeated. ISIS may ultimately have failed, but it looks as though the Taliban have not. Furthermore Islamist groups in the West will be emboldened – especially those who believe in the eventual triumph of Islam over the whole world.

4. Perhaps the Taliban will be able to do what few have achieved – rule over a stable Afghanistan? It is more likely that there will be either civil war or an unstable country, divided into the different tribal regions. The result of this is likely to be an increased number of refugees which will only add to the current tensions – especially in Europe. The West has a moral obligation to care for the tens of thousands of Afghan who helped it. But there will be even more seeking to leave the country.

5. President Biden has been severely weakened. He has looked and sounded weak and incoherent. Reports came this week of Bin Laden having ordered his men not to try and assassinate Biden because he believed he would be a weak President. Whether true or not, is this fair? What choice did he have? After all, it was President Trump who first signed the agreement to withdraw. There are not many Americans who would dispute the need to get out of Afghanistan, although I suspect not many were aware that in the past 18 months not one American had died.

But it was the manner of the withdrawal that is the problem. Not getting the civilians evacuated first, not consulting with allies, and boasting that the US had left a well-equipped and trained modern army of 300,000 and that this would never be a ‘Saigon’ moment – just a couple of weeks before it became precisely that. The Taliban now have billions of dollars’ worth of US equipment – including over 750 military vehicles, ammunition, guns and planes.

Biden also did his stature a lot of harm in the rest of the world by accusing the Afghans of not fighting for their country – 55,000 Afghan troops have died in the past 10 years doing precisely that. If President Trump was ridiculed for his ‘make America great’ policy, Biden looks as though he has an ‘America alone’ policy. When an ally like Tony Blair says that Biden’s policy was ‘imbecilic’ then you can see how much trouble he is in.

6. The region around has been destabilised. Islamist militants in Pakistan will be emboldened in their clash with India over Kashmir. The republics to the north of Afghanistan could become havens for militants – little wonder that Russia is worried. The consequences for Iran and the Middle East to the south are also unknown. But the real winner in this appears to be China to the east. It has already congratulated the Taliban. Why? They have no love for Islam (ask the Uighurs!) – but they do love resources such as copper and the lithium so essential for batteries. Afghanistan has been described as the Saudi Arabia for lithium. China will fund the Taliban and support it in the UN, as long as the Taliban ensure Islamic militants do not go to help the Uighurs across their border.

7. There is also great concern for the Church in Afghanistan. I wonder if you are aware of the Afghan legend which links Afghanistan to the Bible. The Afghan people are supposed to be named after Afghana, the grandson of King Saul, who is supposed to have been Solomon’s chief general. If only the legend were true, I wonder how the Taliban would enjoy being considered one of the lost tribes of Israel! It is already illegal for people to convert from Islam to Christianity. Despite this it is estimated that there may be as many as 7,000 Afghan Christians in the country (there are several exiled churches). Some of their leaders have already been threatened.

In human terms the outlook is not good. But we are not just speaking in human terms. As Joseph found out, what men mean for evil, God can turn for good. Indeed all things work together for the good of those who love God (Romans 8:28). Which is why as Christians we must seek to offer practical help, support refugees and do what we can to influence public policy.

But most of all we must pray, and it is good to see so many churches and Christians praying for the people of Afghanistan. May we continue to do so long after the headlines and dramatic photos have gone.

The earth (including Afghanistan) will be filled with the knowledge of glory of the Lord, as the waters cover the sea (Habakkuk 2:14).