Apologies for missing out on last week.  I was kind of caught up with the Premier debacle (of which more later).  Greetings from an extremely wet Sydney.  We are in the midst of a 1 in 100-year event, as our Premier has said.  When you see that some rivers are ten metres above their flood level, and the main Warragamba dam is now at 100% and releasing more water into already flooded areas, you can get a sense of the impending disaster.  Already $2 billion damage has been done and more is to follow.  The next 24 hours will be crucial.  To help you understand, Sydney is a wonderful city to live in because it usually has plenty water.  Occasionally it has too much.  The city is on the coast but it stretches towards the mountains in the West and North – between the centre of the City and Blue Mountains there is a basin – the trouble is that water is usually collected there, but it is like a bathtub with a small sink hole…if too much water comes in – it overflows.  And that is what has happened this week.  Those in the flood plains (i.e., the bottom of the basin) are the ones most affected. 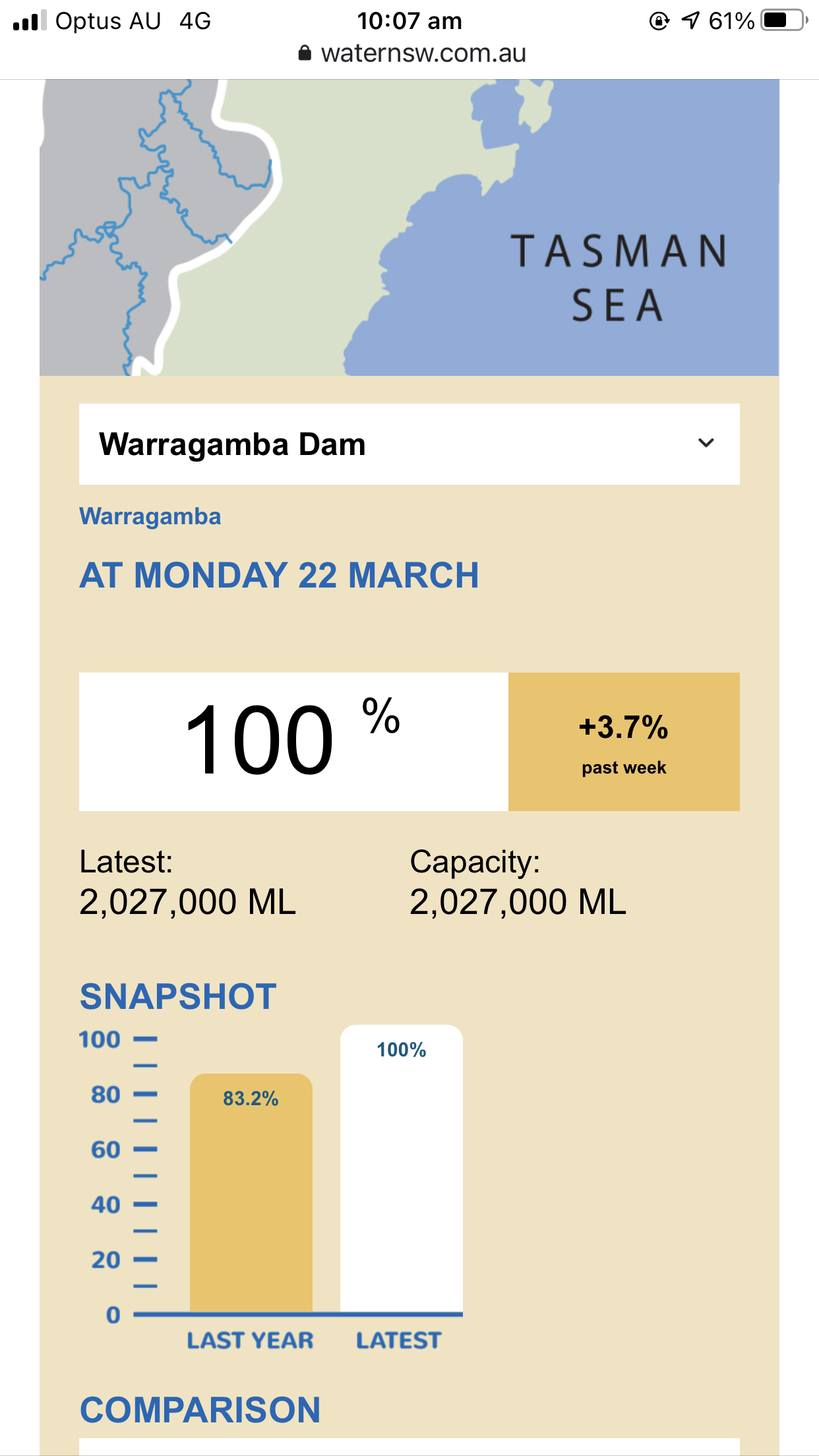 Last week was a travel week.  I was down in Melbourne to speak at a City Legal event.  Such an interesting city – with its wide streets and superb cafes.  The impression of it being a police state was not helped by being greeted at the airport by police inquiring whether we had the plague!

Annabel and I have just returned from a lovely weekend on the Sunshine Coast – which, given the ‘weather event’ affecting the whole East coast, did not live up to its name.  However, it was a lovely break in a beautiful place – for me the highlight was going to a rather interesting Presbyterian church on Sunday – but I will leave comments on that until next week.

I have just finished reading Carl Trueman’s Magnum Opus – The Rise and Triumph of the Modern Self.  It is a difficult but brilliant read.  Totally essential for understanding our culture.  I was greatly helped by the understanding that we now live in the age of ‘psychological man’ .   There are many fascinating insights – I will write a full review later but here are a couple of quotes.

“Once harm and oppression are regarded as being primarily psychological categories, freedom of speech then becomes part of the problem, not the solution, because words become potential weapons”  (p.55)

“Liberal democracies have long assumed that the free exchange of ideas in society is a means of preventing totalitarianism and promoting the common good.  In the world of psychological man, however, it serves rather to give legal protection to (verbal) assaults on the person” (p.326)

I was thinking about this as regards the bizarre pulling of my article from Premier Christianity.   The editor explained it in this way…”  I was wrong to publish a piece which caused such widespread distress to so many people. That is not the way of Christ…. Our decision to remove this piece was not based on fear of condemnation but out of love for those we’d unintentionally hurt.”

“Your apology and cancelling of my piece also caused a great deal of distress to many people.  But that doesn’t matter to you.  It seems that you have bought into the whole world agenda of hurt hierarchies.  Obviously, you regard some peoples hurt as more important than others.    Do you really think that is the way of Christ?   Would you like to name a controversial piece that does not hurt anyone?   You are either stating that you will publish no such pieces (and thus reduce the magazine to Christian bland beige), or that some people’s hurts are more important than others.  You have no qualms at all about the hurt you cause in publishing Brian McLaren and Steve Chalke.  You don’t care about hurt your BLM magazine edition caused.   To people who were hurt by that – you basically say ’suck it up’.  But you allow other people’s ‘hurts’ to censor.  Its intellectually dishonest and lacks any kind of courage.”

Imagine if we read the Bible through the eyes of psychological man – where the ‘hurts’ of the powerful are used to shut up and shut down?   Take for example John ch.4.  The woman at the well could have accused Jesus of hurting her feelings by bringing up her sexual history.  The disciples could have been hurt at suggesting that they were reaping the reward of other people’s works, not their own.   As for the royal official whose son was close to death and who came to Jesus for help – he should have been mortally offended at the curt reply to the request; “unless you people see signs and wonders, you will never believe.”!

The ‘hurt’ card gets played by every group that seeks to oppress and silence others.   “The language that I hear from them is of us being woke, or of being loud lobby groups, and what they don’t seem to understand is the reason we have to shout is because we are hurting, because there are people who are vulnerable who are going unheard and unnoticed.”  Jayne Ozanne.

Or take this as an example of several tweets I received: “You got cancelled coz you wrote trash…. Steve Chalke & Brian McLaren totally revolutionised my thinking on Christ, Church and why I believe what I do. I thank God for that”.

Or Kirsty Wark trying to trap Germaine Greer on her view that men cannot become women – “do you realise that is hurtful to people.”.  To which the feisty Aussie feminist replied: “People hurt me all the time – I’m an old woman – but I’m not going to be manipulated by that.”.   She has more guts than many Christian leaders.

The problem with the modern notion of ‘hurt’ is that it is highly selective and discriminatory.   Did no one consider how hurtful Meghan’s cruel trashing of William and Kate, and the rest of the royal household was?   In the words of REM, everybody hurts – not just the privileged identity groups!

But when we absolutise hurt as the only thing to avoid – then we lose out on love.  Because love sometimes hurts.  As the Scots rockers, Nazareth, sang in 1975 – with their version of the Everly brothers classic – Love Hurts.

Whilst we are on music, the best song about hurt is Nine Inch Nails ‘Hurt’…..with the Johnny Cash being both depressing and liberating.   Hurt runs deep, but there is a way for it to be healed and wholeness to come.

Put all these together and we get a much better grasp of the Gospel.  Christ wounds…but only in order to heal.  Christ was wounded, so that we by his stripes might be healed.  It may ‘hurt’ psychological man (or woman) to be told that he is dead in sins and fit only for Hell – but it is the truth.  How loving is it to tell the man about to be burnt in a fire, that there is no fire?!    The New Testament Gospel would never have been published if the standard of ‘the cross might offend some people and cause them hurt’ were applied.

“But he said to me, ‘My grace is sufficient for you, for my power is made perfect in weakness.’ Therefore, I will boast all the more gladly about my weaknesses, so that Christ’s power may rest on me. That is why, for Christ’s sake, I delight in weaknesses, in insults, in hardships, in persecutions, in difficulties. For when I am weak, then I am strong.”
2 Corinthians 12:9-10 NIVUK

And as has so often been the case in the past couple of years, the teaching of God’s word through Richard Sibbes, who being dead yet speaks, has been so helpful.  He has a sermon called King David’s Epitaph.  They are so apt for modern society.

“Let wicked men cast what aspersion they will upon the names of God’s people; let them eclipse them and cloud then as they please, as their malice instigates them therein, the names and reputations of God’s people are not in their keeping and power”

“There was Doeg and Ahithophel, and Shimei, and other wicked men; yet David ‘was a good man in his generation’.  He was not carried with the streams of the time.”

“Every age has particular sins that reign;  superstition in former times, but now the clear contrary; profaneness, atheism, hardness of heart against the light, presumption, looseness, and the like.  Now these being the sins of our times, we should go so much the stronger against the stream of profaneness and atheism.”

PS. I thought this from Brendan O’Neill was insightful…..

Thou shalt not criticise Meghan Markle. Woe betide anyone who even thinks about dissing this duchess. This commandment has been vigorously enforced here in Britain ever since Meghan and Harry’s sitdown with Oprah was broadcast on TV.

That televisual spectacle has unleashed an extraordinary chain of events. The chattering classes have elevated Meghan into the patron saint of wokeness. They venerate her.

They cheer her for “telling the truth” about the royals, the media and much of the British public — we’re all racist, apparently — and they insist we all accept this truth into our lives.

And if we refuse? If we dare to question Meg’s decree that the British tabloid press is a hotbed of racism?

If we express scepticism about her claim that the royal family is a uniquely repressive and possibly racist institution? Or — heaven forfend — if we baulk at the sight of these two millionaires telling their billionaire buddy, Oprah Winfrey, about how hard their lives have been?

Well, then we’re in trouble. You’ll be accused of anti-Sussex blasphemy. You could even find yourself cast out of polite society, a shameful Meghan-doubter left to wander in the wilderness. The political atmosphere in Britain in the wake of Harry and Meghan’s explosive chat with Oprah is strange, censorious and unsettling.

The royal pair’s main talking points were the archaic, uncaring nature of the royal family, the bigotry of the British media and the difficulty of living in a country as racist as the UK. Charming. With eye-swivelling speed, their “truth” has been institutionalised by the woke set as the truth.

Letter from Australia 84 – Christ is Glorious! Preaching from Sydney