The United Kingdom has been one of the most effective and successful political unions of all time.  It began in less than auspicious circumstances (as Burns so memorably put it – ‘we were bought and sold for English gold, such a parcel of rogues in a nation’, but quickly developed into something that many of us can look back on with pride.  Yes, of course there were things that were seriously wrong – but on balance the union of the kingdoms of England, Scotland, Wales and Ireland has been a net benefit for its own people and for the wider world.

But all things must pass.  Sometimes empires and unions pass their sell by date.  I believe that we have reached that point with the United Kingdom.  There are many reasons I could mention – for and against – but the simple case for me is that I believe it is better that small nations govern themselves.   When they are run by a larger nation in an unequal partnership, and dominated by a capitol city which tends to such everything to the centre, then the smaller is always at a disadvantage.  This is even more so in a globalised economy where power blocs and empires (at least commercial) are back in vogue.  To put it bluntly I don’t believe that Scotland should be governed from London.

In addition to this some of the original reasons for the formation of the Union have now gone – the Empire has gone, and Christianity (especially Protestantism), the foundation of the Union, has also largely gone.  It’s true that the other main reason, commerce, is still there, but in an increasingly globalised world, belonging just to one, relatively minor trading bloc, is not the advantage it once was.  Now Britannia no longer rules the waves, or has privileged trading terms with a third of the world, the commercial reason for the Union is weakened.  Of course, if Scotland were to become independent, there will be a financial and economic cost – but what price freedom?  Should we not be able to make our own laws, set our own taxes and govern ourselves?  And our own international relations?  There is no reason why Scotland, as an independent self-governing country, should not have the closest of relationships with our nearest and dearest neighbours – England.

Although I believe this and voted Yes in the 2014 Independence referendum, I find myself faced with a difficult dilemma.  I believe in Independence, but I cannot vote for the party that seems poised to deliver it.  Furthermore I would now vote No in a referendum which promised to deliver the kind of ‘Indy’ that the SNP proposes.   Why?   Because it’s not independence.   The SNP proposes to take us out of one political and economic union and place us into a larger and more anti-democratic one.   In what world can that be independence?   The current SNP are such a fanatical EU Unionist party that they are even prepared to sacrifice their original constituency – the fishing communities, to the EU gods.  Of course, they make all the right noises to these communities against the CFP, but the reality is that they are committed to joining that CFP – because you can’t be a member of the EU without it.  It’s this kind of inconsistency and dishonesty which gives politics a bad name!

Moreover I have come to the counter intuitive view that the SNP leadership does not really want real independence.   As it is they get the best of both worlds – the power without the responsibility.  When things go well it is of course because of the brilliance of the Scottish government – when things go badly it’s all Westminster’s fault.  They haven’t even used the extra tax raising powers that they have.

Things are even worse than that.  Apart from threatening to take Scotland into the EU, the Scottish government have also moved in an anti-liberal authoritarian direction.   Scotland is not (yet) a one-party State – but the Scottish government have no qualms about pressurising the media, academia, the arts and business to fall into line with their policies.  I will never forget the ominous words of Ian Blackford, their Westminster leader; if you accept Scotland’s ‘values’ then you are welcome – if you don’t – then…..?  By Scotland’s values Mr Blackford of course means the SNPs.  Whilst the SNP have done much good, in later years they seem to have lost the plot. Look at the disaster that is Scottish education, the threat to the NHS ( and a refusal to reform it), the Woke ‘progressive agenda, the Hate Crime bill, the promotion of transgender ideology and above all, the failure to help Scotland’s poor (the SNP is supremely a party of and for the Middle class – especially those who benefit from Middle class subsidies).  Add to this the stench of staleness and corruption – that comes from being in power (without responsibility) for too long, and you can see why I feel politically homeless.   If Burns were alive today I suspect he would be saying “We were bought and sold for EU gold, such a parcel of rogues in a nation.”

If only there was a party that wanted real independence and didn’t buy into the socially regressive (they call it progressive but in reality, it is leading us back into pre-Christian Greco/Roman/Pagan times).  Well now there is! A new party called Restore Scotland is launching today. 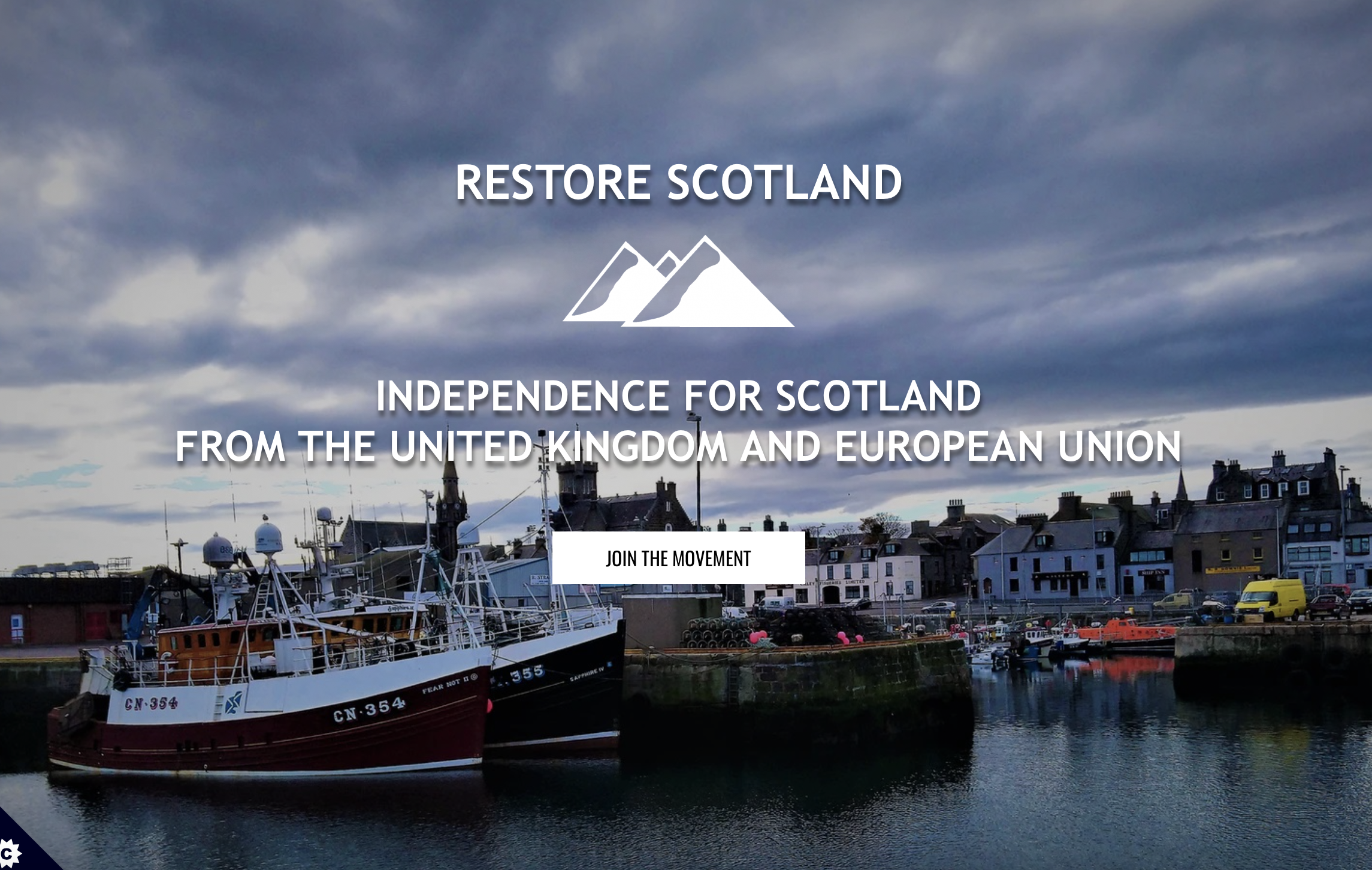 Here are a couple of quotes from their press release –

“On Wednesday 17 March 2021, approximately 50 days before the people of Scotland will go to the polls to elect the next Scottish Government, Restore Scotland officially launch as Scotland’s newest political party. Founded in 2020 and registered in 2021, the party stands for Scottish independence from the United Kingdom and European Union”.

“While we affirm the right of our people to individual autonomy and self- government, we also represent the mainstream on many domestic issues which is broadly in line with the common-sense instincts of ordinary Scots. Our commitment to, for example, individual liberty stands against the authoritarianism of legislation like the Hate Crime and Public Order (Scotland) Act and our commitment to public health will counter policies that have failed vulnerable drug users across Scotland.” (David McHutchon – interim leader).

Libertarian, social democratic, independence, socially conservative – what’s not to like?!

It is of course unrealistic to expect that a brand-new party will immediately form the next Scottish government.  But I hope that they will get enough votes to make their presence felt and to provide an alternative to the monolithic, authoritarian Scottish government, the regressive Greens, the illiberal Liberals, a Labour party which does not seem to know what it stands for, and the ineffective Tories.

Let me add two caveats to this.

Firstly, I know some of the people involved in this new party and have encouraged them.    I would suggest you get to know them as well.  Why not get involved?  Become a member, volunteer, finance.  In fact, why not offer to stand as a candidate?  They are looking for sane, ordinary people who just want to serve!  Have a look at their website for details.

Secondly in anticipation of the usual anti-Christian and pietist objections – let me state that these are my personal political views.  They are not the views of the Church or the Bible (which does not tell us who to vote for!).  There are Christians who will vote for, and serve in, other political parties.  I thank God for them and wish them well.  But from my perspective this new party offers a small glimmer of hope in an increasingly hopeless political world.   You may disagree but don’t play the anti-religious card if you do.  Deal with the arguments. Perhaps I should also make this plea – I hope that any discussion on this will be respectful and avoid the hyperbole and name calling that  is so prevalent in politics today (especially online).    As a Scottish citizen I surely have the same democratic right as everyone else to make the case for how I would like to be governed. And you have the right to disagree!

“I believe in a Scotland that is sovereign, just and free!”